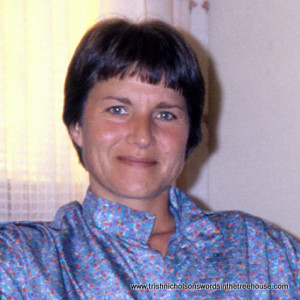 Several readers of Inside the Crocodile have asked me why, among all the coloured photographs, there is only one small image of the author.

The selfie revolution had not been invented when I was in Papua New Guinea. I was usually behind the camera rather than in front of it. But the main reason is that Inside the Crocodile is less about me and more about the places I lived in and people I worked and played with.

The other reason is that, like most of you probably, I have suffered on occasion from friends’ invitations to ‘come and see our travel pictures’. You know the sort of thing: “That’s me eating ice-cream below the Parthenon, it was really hot”…“Here’s Eric with the wind blowing his hair into his eyes outside the Taj Mahal, doesn’t he look cute?” … “Oh, here’s both of us eating ice-cream in Egypt, you can just see the Sphinx in the background”… and on and on.

I did not want to put my readers through a similar experience. Instead, I selected pictures of the people I wrote about and scenes that portray life in Papua New Guinea.

But looking through the files, I realise that quite a few people had taken photographs of me for one reason or another and given me copies, so I’ve put this post together for those of you who are curious to see the author at work and play. 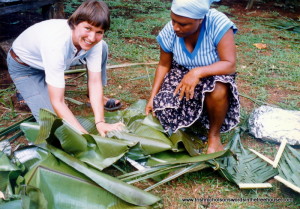 Within days of my arrival in Sandaun (West Sepik Province) I was taught how to wrap pork and vegetables in banana leaves to make a mumu – food cooked around hot stones buried in the ground. My instructor was Vero, a supportive friend and instigator of much laughter. 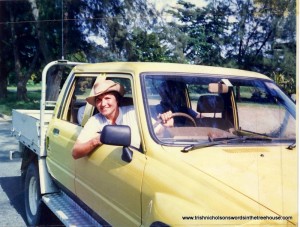 Jim, the project boss, took this photo to mark the day I was issued with ‘Harry Karry’ – a government truck to use during the working week. Only three roads radiated out of Vanimo – the main town in Sandaun where I was based – and they petered out after about 40 kilometres, but it saved me traipsing between the scattered offices and the airstrip in wilting heat and humidity. 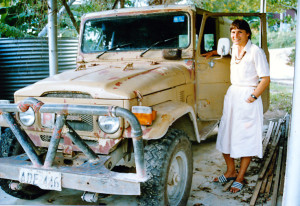 Much later, I acquired The Beast, bought for personal trips from a volunteer who was ‘going pinis’. Once I learnt to conquer The Beast and driving felt less like riding rodeo, he was the source of delightful if dodgy adventures. 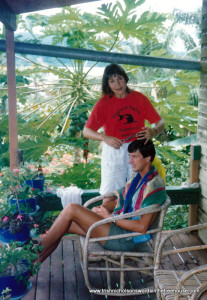 A regular Sunday activity was my role as local barber – courtesy of my mother’s gift of her precious dog-clipping scissors – especially in the hottest season when hair prickled and clagged around perpetually sweaty skin. Itchy friends and colleagues queued up on my veranda, and ‘paid’ me with a melon, a cabbage or, the most coveted reward, a three-month-old copy  of The Guardian Weekly. Unfortunately, I didn’t record the name of this handsome young client. 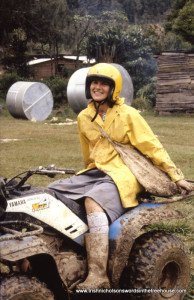 In remote areas I sometimes had to beg, borrow or steal a way to get to isolated locations. In the wetter season, the ‘road’ to Divanap Community School was a deep muddy quagmire impossible to walk, and I begged a ride on the mud-bug owned by a Baptist missionary. I borrowed his wellies, too, which he wanted on record.

Harry, the headmaster, was delighted to see me because I was there to give his first tutorial for the distant-learning management course he was studying. 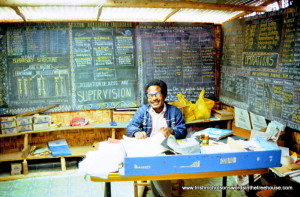 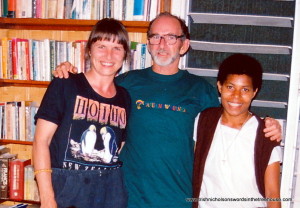 When working in the districts I often stayed with the Franciscan missionaries who were a jolly crowd. After one uproarious evening, one of the sisters took this photo of me with Sista Rose and Brother Leo – famous for his home-made ice-cream (sorry there’s no photo of us eating it). 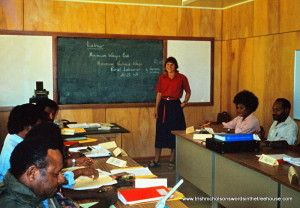 Martha, my secretary and right-hand-woman at our Staff Development Unit in Vanimo, recorded here my first course given in the sparkling new, custom-built training room we had fought ‘invading politicians’ so hard to retain.

After such a struggle to have it built and then to defend it, we were proud of our own building, which included offices and interview rooms. In our commemorative team photo here, standing centre back is Bonny, my counterpart who took over from me when I left after five unforgettable years. 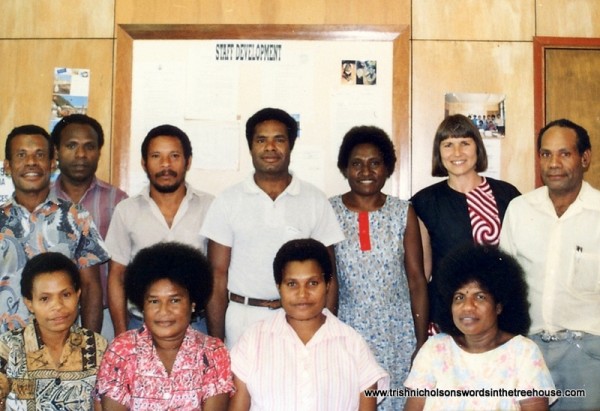 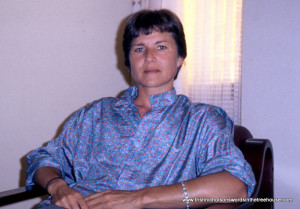 But regular visits had to be made to Waigani, the central government offices in the capital, Port Moresby, to do battle with intransigent bureaucrats – the ‘red-tape stranglers’. On these occasions I had to dress smartly and prepare for ‘determined negotiations’. 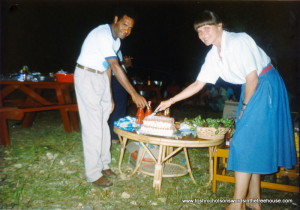 At my farewell party, the team baked a cake which Bonny and I ‘cut’ together – we only had one knife, so Bonny had to ‘act’. By that time, although I’d recovered from a near-fatal bout of malaria, I was still pretty skinny.

I notice there are no photos of me on our wild, three-day bush-trek, but I think, like me, my three companions were too busy trying to work out how many more ridges we had to cross to reach Lake Kopiago … and stay alive. 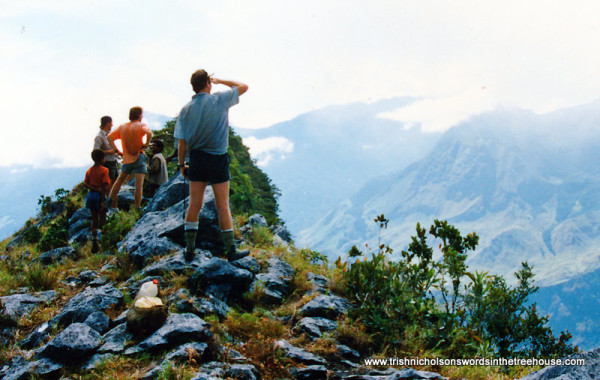 For those of you who asked for more author pics, I hope these will do; I didn’t find any others.

For the full story of ‘tears of laughter and laughter through tears’ you can read Inside the Crocodile: The Papua New Guinea Journals, details here.

And enjoy a toe-tapping video on my Home page here.