As the old song says: “Love is a many splendored thing … nature’s way of giving a reason to be living,” and we teasingly call courting couples ‘love birds’.

But do birds experience love? It’s a moot point. Birds do show behavioural signs of emotions, and it is known that their brains are divided laterally, as are our own. Emotions, such as fear and anger, controlled by the right hemisphere; habitual and more thoughtful responses controlled by the left hemisphere.

Don’t worry, I’m not offering complex research results here, nor do I intend sentimental anthropomorphic interpretations. This photo-essay is simply to share with the you my delight when a pair of white-faced herons (Ardea novaehollandiae) decided to build their nest a couple of weeks ago in the pine tree that bears my tree house.

The tree house is a modest affair, more like an eagle’s eerie, because the welfare of the tree was paramount. “The whole structure flexes to the branches’ own movements with the gentle creaks and sighs of a woody refrain – the lullaby of an old sailing barque.” [The Five Acre Forest] 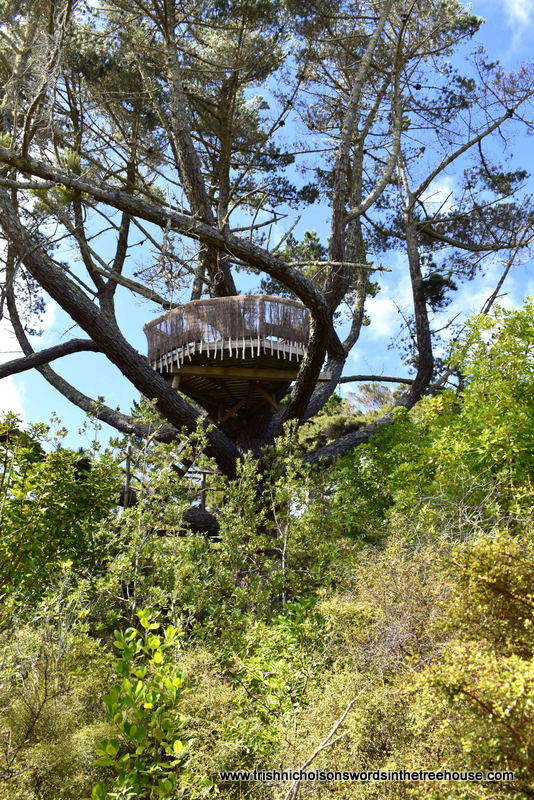 This old Pinus radiata has spreading limbs and plenty of needle-clustered branches for nesting sites, which is, perhaps, why the herons chose it. Below is my view of it from the veranda and kitchen window, and explains why toast so often turns to charcoal and kettles burn dry with expensive regularity. (The nest site is just out of frame in the top left corner.)

I was carefully hand-watering some of last winter’s new plantings one morning when I heard the throaty, chuntering mutter of heron, and looked up.

At midday, there were two of them, indulging in some mutual grooming.

Then they explored the tree together, poking around among needle clusters and stalking along branches until they seemed to settle on one particular branch. 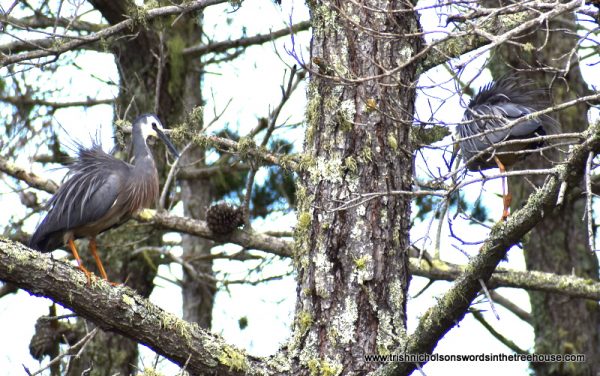 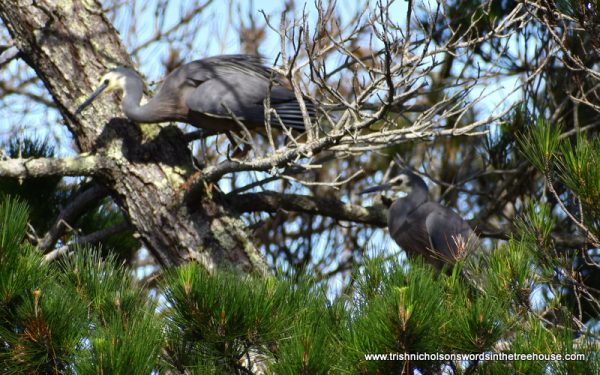 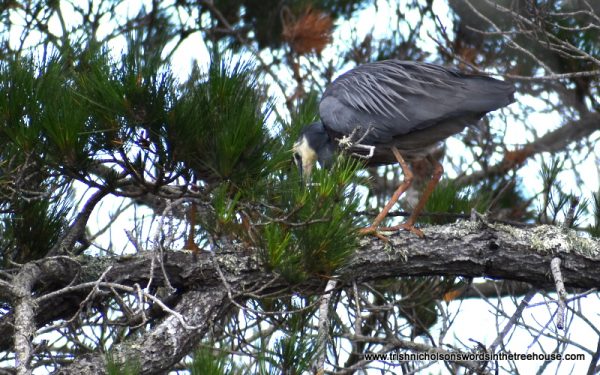 During the afternoon, one of them appeared with a long, unwieldy twig in their beak and manoeuvred it with some difficulty to the chosen nest site where they were clearly sharing the nest building. 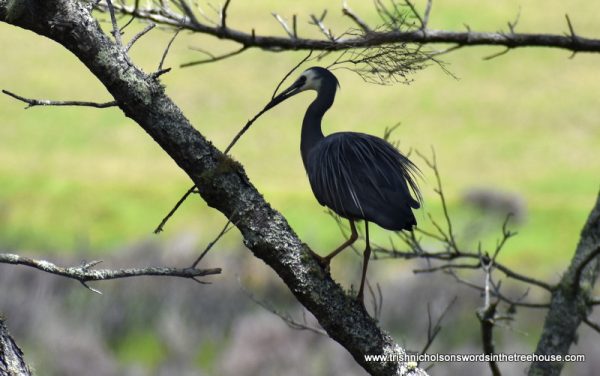 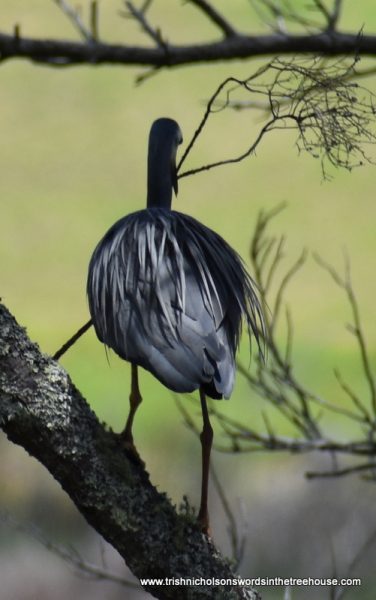 And then I saw where the twig had come from: a pile of kindling beside the woodshed. 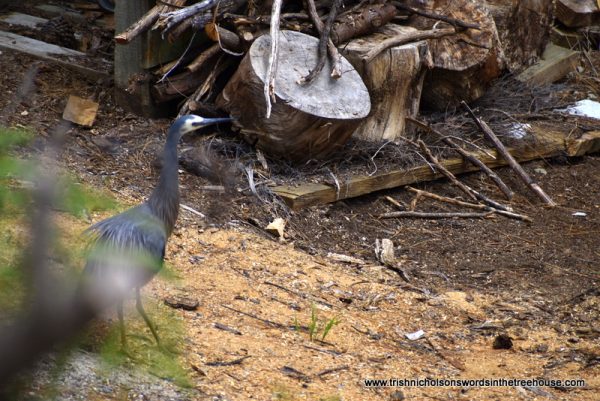 By late afternoon, only one heron was perched in the pine, on the other side of the tree to the nest site, and she appeared to be waiting for her partner, gazing in one direction then the other. She waited there a long time. 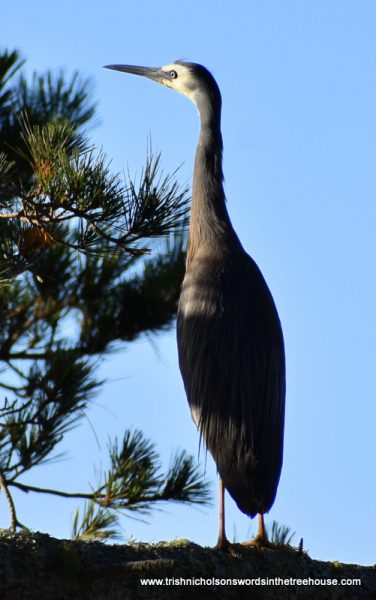 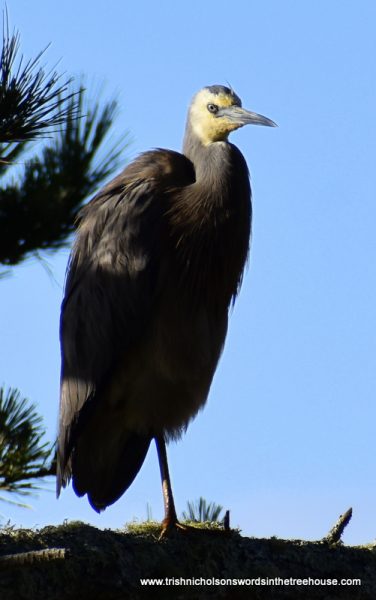 As the sun edged closer to the horizon, she became quite agitated, pacing up and down the branch and I began to wonder…

But just before sunset, he returned, and they stayed together on the branch until twilight when it was time to roost. 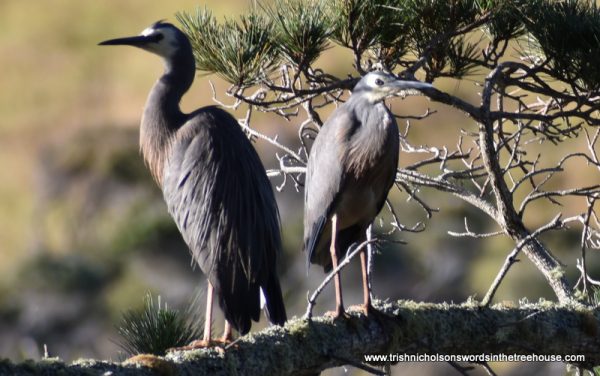 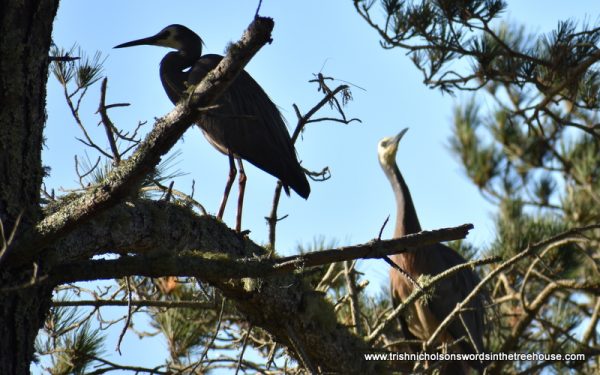 The long, fine pinkish feathers on the neck, shoulders and breast indicate that they are ready to breed. White-faced heron’s usual breeding season is June-October – winter and spring for us in the southern hemisphere. It is now the beginning of January – mid-summer – hot and dry, which might make it harder for them to find enough food to support a brood. Apparently, they lay from 3 to 5 eggs, but usually only 2 fledglings will result. 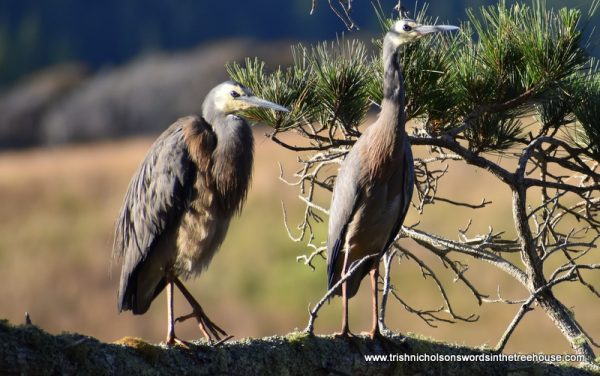 Over the following days, they made repeated forays onto the ground to pick up sticks, and worked together to weave them into their crude ‘basket’ nest. And she tried it out for size. 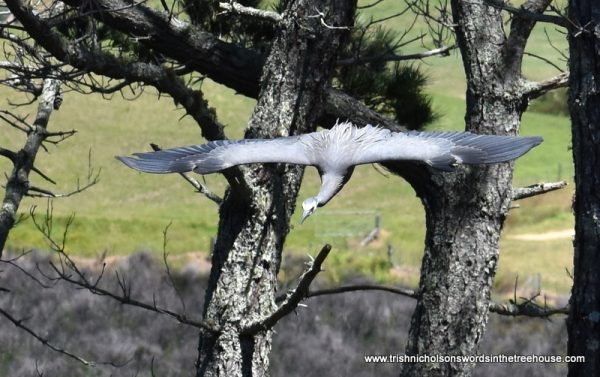 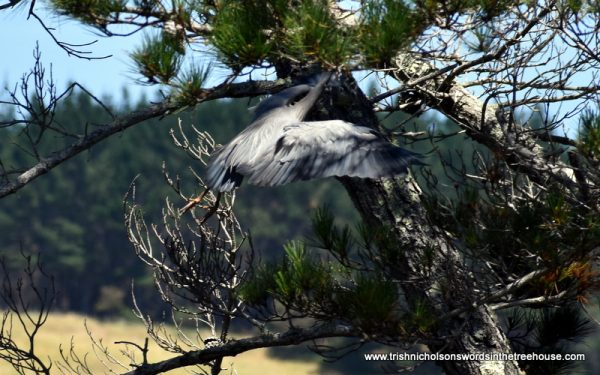 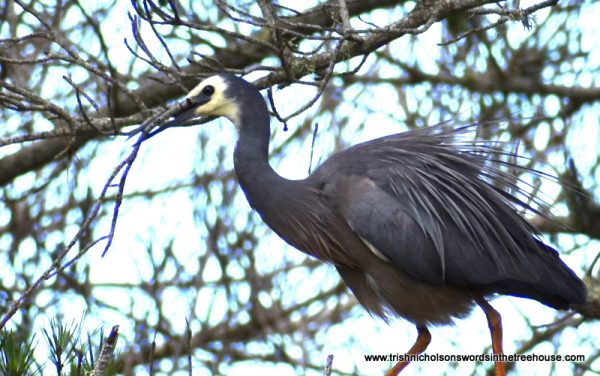 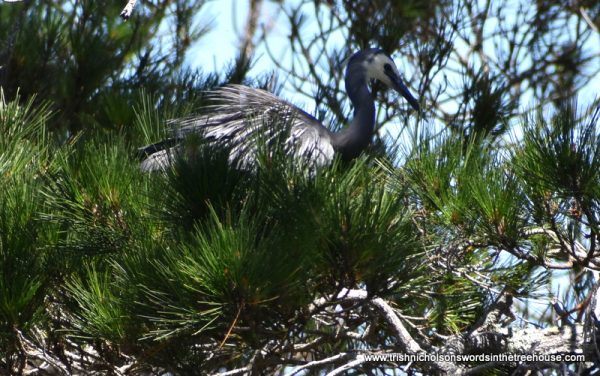 Their wingspan is huge, and I am fascinated by how deftly they steer through the branches when landing and taking off or lifting from one branch to another. 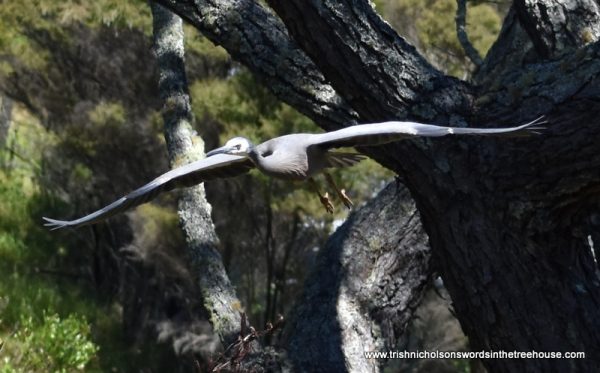 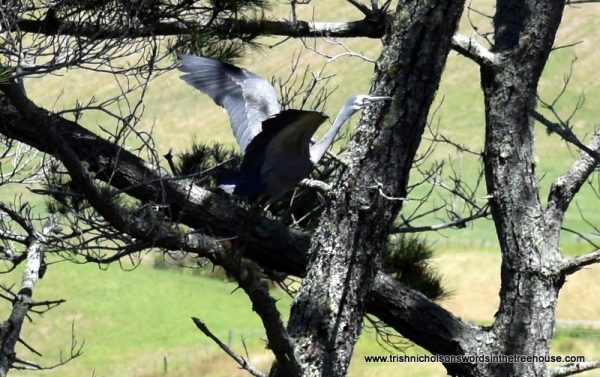 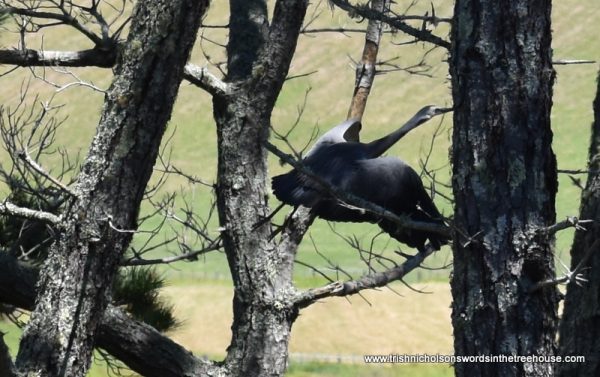 I’m watching out for them every day. Today was especially hot – in the shade of my veranda the thermometer read 33°C (90°F) – and the herons were hunched in deep shade beside their nest, grooming and scratching, clearly irritated by mites. I empathise – I feel hot, tired and itchy today myself. 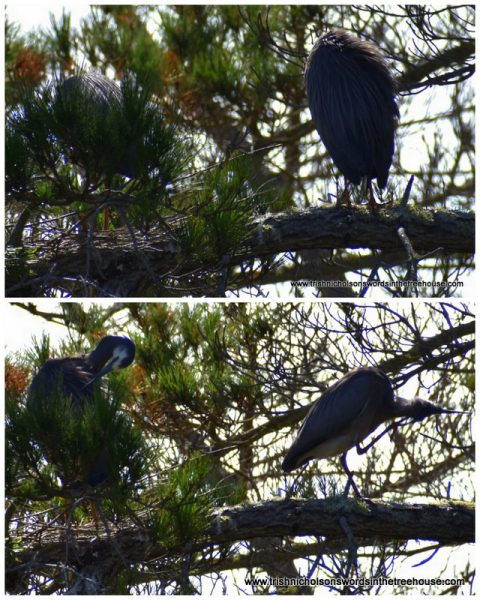 As to whether they feel love and affection, I Ieave you to consider your own view on the question. 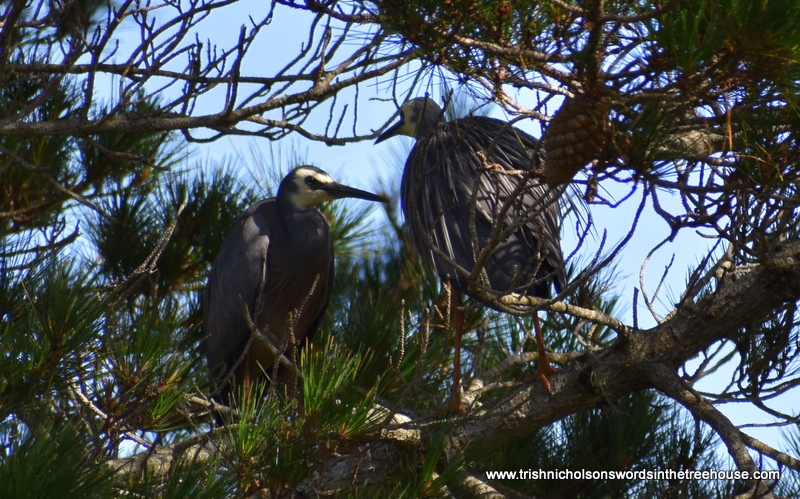 If you have enjoyed this post, please be kind and share it, so that others can enjoy it too.

And if you missed it, you can catch up on the previous post: Time in the Five Acre Forest

I post sporadically, so if you don’t want to miss the next episode, you might wish to subscribe to this Blog: you will be told when a new article is posted, but you won’t be pestered with any other communications. 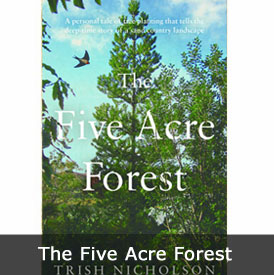 You will find the full story of the five acre forest and the deep-time history of the surrounding landscape and its traditional lore in the nature memoir, The Five Acre Forest.

The Five Acre Forest is also available in a digital edition for all devices, from all major suppliers.

2 thoughts on “Love in the Tree House”