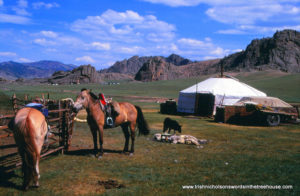 The men in your family could be descendants of Genghis Khan.

Genetic scientists* were astonished when, in 2003, they discovered traces of a single paternal ancestor in 8% of a large sample of men drawn from across the whole of Eurasia. That genetic marker was later identified as belonging to Genghis Khan.

The Mongolian chief had the pick of women captured during his conquests; if he fathered only thirty children (a modest estimate he would probably find insulting), multiplication each generation over the past 800 years would amount to some 20 million men bearing his distinctive genetic pattern today.

But thousands of years before Mongol horsemen galloped across a continent to conquer an empire, the small, sturdy wild horses which ancient Central Asian tribes had first hunted for food, and then domesticated some 4,000 years ago, had already spread their genes across Eurasia west to Scandinavia and east to China and Japan.

Subsistence farmers and nomadic herders of the vast grassland steppes depended upon their horses for transport, meat, milk, hides, and hair as well for war mounts. The Mongol Empire would hardly have been possible without these courageous, hardy animals.

One of the fascinating bye-ways I had to resist when researching for Passionate Travellers was the origins of the unique Icelandic Horse, ridden by Ida Pfeiffer on her journey through Iceland, and its distant cousins in Japan that carried Isabella Bird for over a thousand miles.

Domesticated horses accompanied early migrants through Northern Europe and Scandinavia where the hardiest animals were selectively bred in Norway and Sweden. The shaggy-maned mounts had stamina to winter outside, foraging for themselves; were sure-footed on rough terrain, their hard hooves not needing to be shod; and they were small enough to be stowed in the Norsemen’s ships.

When the Vikings colonised Iceland during the Age of Settlement (c870–c930), they took their horses with them in their longboats.

In Iceland’s volcano-sculpted landscape of lakes and bogs, of stark mountains guarding lush valleys, of glaciers, and gravel plains littered with lava blocks, horses enabled pioneering farming communities to establish and survive. It is hardly surprising that horses feature in Norse mythology, not only among the Aesir, the gods – Odin’s miraculous eight-legged horse, Sleipnir – but even more so in later Icelandic sagas depicting settlement and the conflicts between pagan traditions and the new Christian religion then being widely adopted.

These sagas were not tales of man’s fate in the hands of irascible gods but of human agency amid the practicalities of daily life:

Story weaves a homespun cloth beside the domestic hearths of Norwegian settlers in Iceland, revealing life’s everyday struggles to wrest a living from the landscape while managing relationships with kith and neighbours … in settings where men sleep in their own beds at night and demand breakfast in the morning; where humble shepherds guard sheep in high-meadow summer grazing, and gossip-women pound clothes at the river bank. (A Biography of Story, A Brief History of Humanity)

In Hrafnkel’s Saga, the young settler, Hrafnkel, lays claim to a fertile valley in Jokulsdale district. He builds a temple to the god Frey, dedicating to the deity his favourite horse which he names Freyfaxi – ‘Frey’s horse’. In the grip of his zeal, Hrafnkel swears an oath to kill any man who rides this horse without his permission. A serious act, for an oath to a Norse god was unbreakable.

When Hrafnkel learns that one of his shepherds has ridden Freyfaxi, he goes to him at the shieling, the high summer meadow, and kills him. The rest of the saga resolves guilt, revenge and justice tumbled about between the old and new moral orders.

In Thorstein the Staff-Struck, both main characters breed horses: Thorstein, an industrious young man supporting his aged ex-Viking father, and Bjarni of Hof, a wealthy, powerful chief. The saga begins during a formal horse-fight – a popular sport – when violence erupts between Thorstein, and Bjarni of Hof’s steward, Thord; the latter starting the conflict and leaving Thorstein’s face permanently scarred. In a short, though tense and complex tale, the new order prevails through Bjarni’s wisdom.

When Ida Pfeiffer travelled in Iceland in 1845, horses for riding and as pack animals were still the sole form of transport: the rugged terrain unsuitable for wheeled vehicles in any season. All but the poorest families owned a horse for travelling, the better off, several.

But these were not just any horses: since early in the settlement period, the Norsemen recognised the high value of their small sturdy animals and passed laws at the Althing (the Icelandic Assembly or Parliament) to protect their unique qualities. Importing other horse breeds was forbidden, a law that still exists, along with modern strictures on selective breeding.

As a result, the 80,000 or so horses in Iceland today are all of a single breed – the pure Icelandic Horse. (Though small – 12-14 hands – it is a horse, not a pony.) In its stocky build and shaggy mane and tail it is similar to the Mongolian horse (whose genes it bears), and is commonly viewed as the closest of any breed in the world to the original pre-domesticated horse (Equus ferus), which is now extinct.**

Icelandic horses have certainly weathered major challenges. The massive 1783 volcanic eruption of Lakagigar (Laki) – which lasted eight months, its ash choking rivers, smothering the land, and killing half of Iceland’s population in the subsequent famine – caused the deaths of two-thirds of the island’s horses.

By the early nineteenth century, narrow roads connected Reykjavik to surrounding villages; they were dry in summer but rough with stones, so horses were shod. But there were no blacksmiths; travellers on long journeys carried with them spare shoes and nails.

While visiting the country in 1810, Scottish naturalist George Steuart Mackenzie noted in his journal:

Every Icelander, of any rank, can shoe a horse. The shoes are plain; and the nails which are very large, are driven firmly through the hoof, and carefully doubled over … for a short journey, it is customary to put shoes only on the fore feet of the horses. When iron is scarce, the horns of sheep are made use of for horse shoes.

Mackenzie found Icelandic horses excellent for riding: They are accustomed to scramble slowly through bogs and over rocks, and to dart rapidly forward whenever they come to dry and smooth ground. But he was disturbed by the custom of slitting the nostrils of promising young horses in the belief that it aided their breathing when pushed hard.

My ‘passionate traveller’, Ida Pfeiffer, though unaware of their noble history, described the horses she rode as reliable and responsive. But the woman’s saddle – a wooden ‘chair’ with a board across the mount’s shoulders for her feet – was uncomfortable, “it was impossible to keep a firm seat.”

Traversing landscapes with few, widely scattered inhabitants, and in arduous conditions, Ida was often on horseback for twelve or fifteen hours a day. Though it was customary for Icelanders to take at least two riding horses for a long journey to enable them to alternate, and Ida did so, her guide took only one mount for himself and his baggage – presumably to avoid the additional work, though one pities the poor horse.

Such long journeys on horseback were fatiguing, and exposure to harsh weather had chapped Ida’s face, “scales” flaked from her skin, her lips cracked and bled. She could have avoided long days in the saddle if she had brought tents for shelter at night, but she could not afford them. And the additional load would need extra horses and another guide to lead them. (Passionate Travellers)

Ida’s biggest frustration was the “exceedingly awkward” way that baggage was loaded onto pack horses, a feature noted also by Mackenzie: “…we do not recollect ever having travelled two miles, without stopping ten times to rectify the baggage.”

To load a pack-horse, a slab of dried turf was laid over the horse’s back; a curved length of wood with pegs at both ends was placed across the turf; and hefty, leather-bound wooden trunks containing goods were suspended from the pegs on either side. But as the whole thing was not fastened to the horse, it easily slipped askew, requiring frequent stops to repack the baggage.

It is a final testimony to the stamina of Icelandic horses that Ida Pfeiffer, led by a mountain guide, was able to ride her horse for the first three hours of ascending Mount Hekla volcano (1,500 metres), and then walk – or rather clamber over massive razor-sharp lava blocks – for only two hours to reach the summit.

**The other pre-domestication species in northern Europe, Przewalski’s horse (or takhi), is a sub-species whose evolution split from that of Equus fera around 200,000 years ago. Przewalski’s horse remains endangered in the wild, having been reintroduced during the 1960s.

George Steuart Mackenzie, Travels in the Island of Iceland During the Summer of the Year MDCCCX, Edinburgh (1811) (Forgotten Books 2018).

If you enjoy travel, history, literature and stories, you will find plenty to absorb you in:

Passionate Travellers: Around the World on 21 Incredible Journeys, also an eBook from your favourite digital supplier, and,  A Biography of Story, A Brief History of Humanity, the only global history of storytelling.