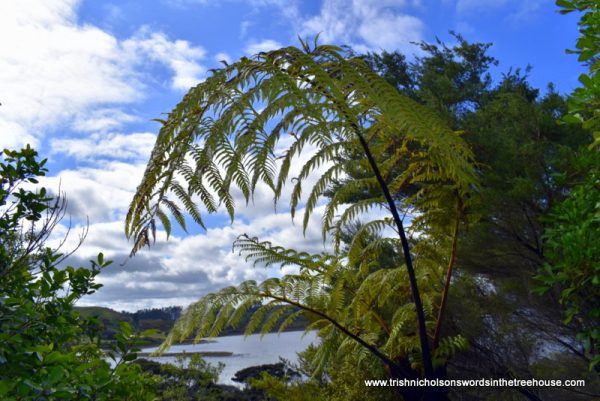 For one person to hand plant five acres of hillside with native trees takes years. And the trees may take decades to reach maturity. But the creation of a forest community extending above and below ground is Nature’s work of centuries.

Time and timing are Nature’s essential resources: time that runs in a cycle of death, rebirth, change and re-balancing through each season and for eternity. It is not a man-made calendar but Nature’s own time to which we are bound.

I had thought of calling this piece ‘Before and After in The Five Acre Forest’, and I have gathered together photographs which show the immense change that has taken place on the Dune, but there is no ‘after’ in planting a forest. Each year, each decade, is a stage of development different for each species in specific situations and microclimates.

Add in that the Dune is all sand on extremely steep slopes, and the task begins to show its true perspective.

The first problem to be tackled on the Dune was to stabilise the sand and stop erosion; a couple of gullies of loose sand had developed on the south-facing slope, and patches of bare sand between invasive plants were vulnerable.

The second job was the judicious removal of invasive and noxious weeds. “Judicious” because on an exposed site, weeds help to hold the sand in place. Most importantly I needed to control pampas grass, extensive thickets of gorse that had reached way above my head in our sub-tropical climate, wattle trees, and young wilding gum trees. I left some of the gorse and gums that would serve as nursery trees once I’d planted native seedlings. Bossy nurses could be trimmed or removed later.

To do both of these jobs I had to cut simple paths and steps along the contours of the Dune to gain access for planting, weeding, mulching and watering newly planted saplings without skidding down the slopes and risking further erosion. The steps have remained remarkably resilient, only a handful need replacing each year.

For me, the most exciting comparisons over time are in the growth of individual trees.

A Pūriri tree (Vitex lucens) planted as a one-metre seedling twenty-one years ago has grown to almost twenty metres, and produces copious nectar-laden flowers and berries which provide bird food all year round. (Another Puriri, planted in a more challenging location, has grown barely eight metres.) 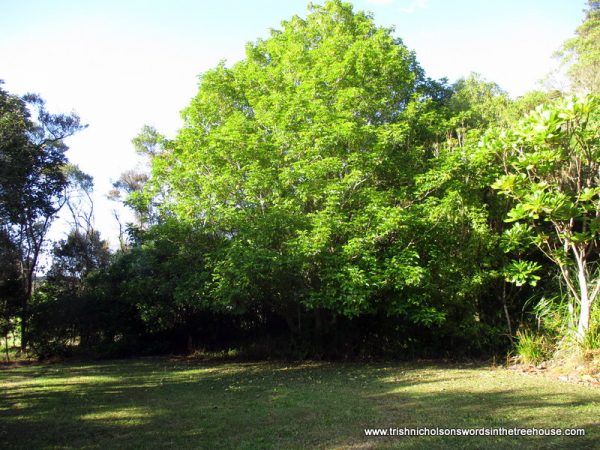 The Kauri tree (Agathis australis) that graces the cover of The Five Acre Forest was planted twenty years ago as a one-metre seedling. He grew slowly for the first ten years, but seems to have raced ahead since and has been producing male and female cones for several years.

A Kahikatea, white pine, (Dacrycarpus dacrydioides), also planted as a one-metre seedling twenty years ago, has grown straight and true; her characteristic, dark green triangular profile now towering over her neighbours, though she is not fruiting yet.

Over most of the Dune, trees have grown to form a light canopy, which shades the ground beneath and creates a more favourable microclimate for bird- and wind-sown seeds to germinate, and for ground cover plants that have struggled, to grow to their full potential.

Now that most trees are mature enough to fruit and seed, natural regeneration is thickening the forest cover. This now makes a combination of planting and ‘wilding’ possible, discussed in an earlier post – ‘Forests: Courting or Wilding?’

Far from being ’finished’, in some ways the passage of twenty years heralds a new beginning: it can take that long to assess which species will do best in these dry uncertain conditions. We experienced summer droughts in 2006 and in 2009, but the worst and most severe were droughts in two consecutive years in 2019 and 2020. The ground is still recovering.

Most of the Ti-kouka, cabbage trees, for example, did not survive beyond the first drought and no more were planted. Seven out of twelve Kauri trees died in the 2019 drought, and I have planted three replacements in more sheltered, favourable sites that can be watered during drought if necessary.

Noting strugglers and survivors, I can identify which species are more likely to cope with increasing heat and dryness,  and in which particular situations ­– shade when young often makes the difference between success and failure in the longer term. With the benefit of twenty year’s hindsight, I am again raising tree and shrub seeds and cuttings, but in small numbers now – not in the hundreds as I did during the first decade – just enough to keep me on my toes.

And the biggest change over time in the Dune is that silent days are now filled with birdsong and the churring of insects. I continue to learn as Nature’s time continues to cycle. 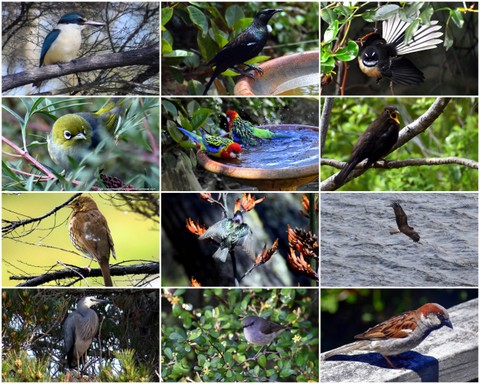 You will find the whole story of the Dune, the forest with its community of birds and insects, and the deep-time history of the surrounding landscape and its traditional lore in, The Five Acre Forest.

The Five Acre Forest is also available in a digital edition for all devices, from all major suppliers.

You can read more details and see an expanded list of contents HERE.

2 thoughts on “Time in The Five Acre Forest”