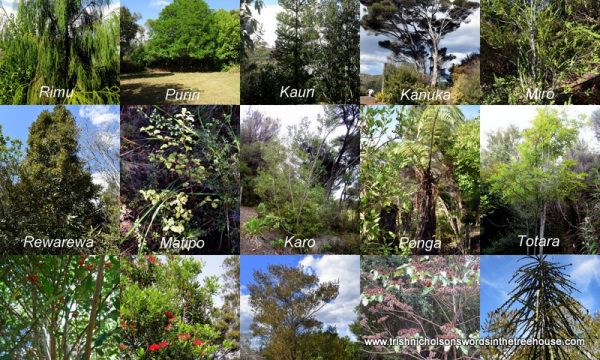 Maintaining and replacing the world’s forest cover is one of the most important actions we can take in protecting ourselves and the environment from the worst ravages of our rapidly changing climate. And yet, forests are being lost to industry, agribusiness, and now often uncontrollable fires at an alarming rate.

An increasingly popular remedy is ‘rewilding’. Applied to any ecosystem of plants and wildlife, rewilding requires the land to be protected from whatever pressures are degrading it – stock, people, extractive industries – and allowing nature to restore itself with a minimum of intervention beyond, for example, reintroducing an animal species that had previously flourished there.

Rewilding landscapes are often large – whole valleys or extensive forest reserves, for example – but human destruction of the world’s primary forest has been so great that even small remnants are of immense ecological value. Old growth trees cannot simply be replaced; they must be protected. Secondary forest does not perform a comparable role until it is matured over centuries, and original diversity may be lost in the process.

But ‘courting’? If I were a professional arbourist or forester instead of a writer and social anthropologist, I would probably use the word ‘managing’ in contrast to rewilding. But although my tree planting in the five acre forest is grounded in a fair knowledge of ecology and conservation, this is not a technical post.

I want, instead, to muse on the deep emotional element in conserving or establishing forest. Planting trees whose maturity we may never see, is about faith, hope, and ultimately about a sense of belonging in nature. It is in recognition of this, and the approaches and attitudes it entails, that I use here the word ‘courting‘.

Courting does not carry the expectations of control that hovers around the word ‘managing’, a concept that misleads us into thinking we can gain the upper hand. In the five acre forest I am the junior partner subject to constraints and events I may be able to foresee but not avoid. I can only adapt by trial and error, coping with natural uncertainty accentuated by the climate crisis.

Sometimes, my attempts at affection and nurturing may be rejected, and each failure must be absorbed as a learning opportunity, a chance for fuller appreciation of the needs and personality of each patch of ground. With the constancy of a lover, I have achieved a clearer understanding and created a deep bond with the land and the trees that begin to form a distinct community – a woodland of native trees.

As early as possible, this young forest community needs to be independent of my interventions because, in tree-time, I am but a fleeting presence. This necessity determines which indigenous species I plant and their precise position on the steep sand slopes of my land – the Dune.

‘Courting’ describes better this more personal relationship with the land, nourishing the soil, coaxing growth, not attempting to impose my will but following the land’s lead by encouraging its natural potential; by preparing the ground and selecting plant species that speed up ecological succession, diversify microclimates and habitats, and increase opportunities and choices for a myriad life forms above and below ground.

Rewilding in its strict ‘hands off’ form would not have resulted in a five acre forest, even in the long run. Apart from the fact that ‘fencing it off and leaving it alone’ would take too many decades when our need for tree cover is increasingly urgent, the land lacked the basic foundation to enable a forest to develop: existing diversity of native vegetation and seeds, or at least local seed sources for dispersal by wind, birds and other wildlife.

The whole surrounding landscape of the Dune had long been transformed into pasture, pine plantations, avocado farms, or residential sites. Whole hillsides have been stripped of trees and scrub and left to mass invasions of wattle and gorse. There are no stands of native forest within seeding distance of the Dune.

At the beginning of our courtship, the steep sand slopes of the Dune bore deeply eroded gullies where huge Eucalyptus stumps had been dragged out years before. Between these wounds, exotic weeds such as gorse, pampas grass, wattle trees and assorted garden escapees held sway. Only a small area of bracken and tea tree (mostly kānuka) on the south-facing slope showed any signs of reverting to some early stage of natural vegetation.

Along with native ground covers and understorey shrubs, I planted podocarp conifers and broadwood tree species that had forested much of this area thousands of years ago. The climate would have been slightly different from now, but over the twenty years since I began, the earliest trees planted have grown up to 10 metres tall, and species that mature and fruit at a younger age are already regenerating from their own seed, spread by the increasing bird population which the five acre forest can now support.

It is this new source of seeds, both wind-borne and bird-sown, that is now adding diversity by germinating in gaps and along the edges of the patch of tea tree and bracken on the Dune which was left alone except for regular weeding out of gorse, wattle and pampas grass. In this case, courting most of the land has led to rewilding in one corner of it. The two approaches are not incompatible.

As with any old courting couple who have reached an age of comfortable companionship, the intensity of my intervention has decreased over the years. Although I had to return to ground preparation on some of the steepest slopes, and begin again to raise and plant a small n umber of tree and ground-cover seedlings in response to the last two years of severe summer droughts. Replanting with species that coped best with the droughts will, I hope, make this phase of intervention temporary.

Controlling noxious weeds, though far fewer than there were at the beginning, is an endless task, surrounded as I am by properties on which gorse, wattle, pampas grass, lantana and jasmine among other menaces, run riot and cast their seeds and invasive roots in every direction.

Even native plants who play important roles in the ecosystem of the five acre forest may need their enthusiasm tempered for the sake of their neighbours: bracken (Pteridium esculentum), for example, which Charles Darwin referred to during his New Zealand visit as ‘the tyranny of fern’. Bracken is a natural sequence after forest is cleared or burned which, in theory, will be followed by open woodland after several decades. But, like all ‘nurse’ species, it can also smother tree seedlings … and that is a whole other story for another post. 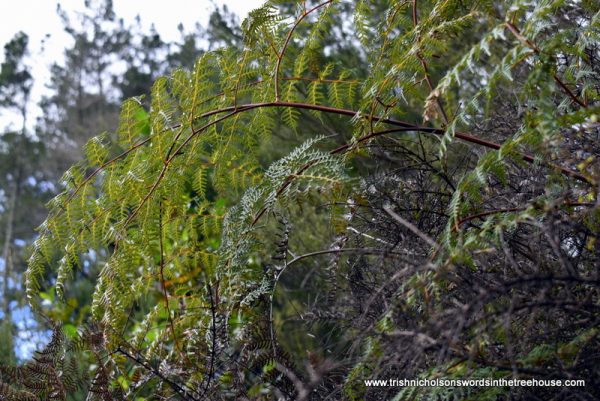 If you missed the first blog post in this series, on how it all began, you will find it here: ‘Seeds of the Five Acre Forest’

Trish Nicholson is the author of The Five Acre Forest, a personal tale of tree planting that tells the deep-time story of an extraordinary landscape of dunes, swamps, lakes and beaches in New Zealand’s sand country.

Pre-release copies are available direct from the publisher (UK only)  here: