My most productive period as a storyteller was between the ages of three and five years.

I hid for hours in the bathroom, squabbling with my characters. Sebastian was there too: we were inseparable. He sat on the floor, ears pricked, tail wagging as if he understood every word. Being an only child, he was my sole critic for a long time. 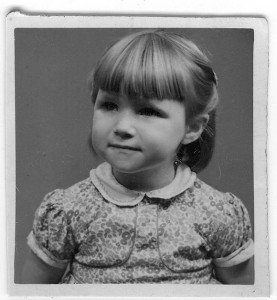 Then one day, the relations came for tea. There were frantic preparations. Clothes, shoes, used tea bags, half-eaten gingerbread men – all the things normally within easy reach in our living room – were stuffed into cupboards and drawers. The table was wiped and draped with a lace-edged cloth I’d never seen before.

My face was washed, ears inspected, hair tugged painfully into bunches, but I didn’t mind: I would have an audience at last.

Uncle Alec gave me sixpence and I decided, at that moment, I would share with him my best story. When a stab of indigestion briefly silenced Aunt Maude, I seized my chance. Engrossed in my first character it was a moment before I realised Mummy was hissing in my ear: “Empty your mouth before you speak.” Driven to tell my story, I spat the mush of peas and fish fingers back onto my half empty plate and kept going.

But they weren’t listening anymore. It was then that I learnt how important presentation is in storytelling.

There were other set-backs in my journey as a writer. One in particular occurred after I began high school. We learnt geography. I loved geography – all those exotic places. I knew about some of them already: my great grandfather and two uncles had been missionaries in China, and Africa, and great aunt Lucy spent years in India and came back a yogi. We didn’t talk about her though: she grew strange plants at the bottom of her garden.

When my first assignment was on Africa I was ecstatic. I wrote about a man taking a river steamer into the deepest jungle to recover from a broken heart – it was my heroic phase and I’d seen The African Queen – he became a missionary, living among the lepers but died tragically, shot by a madman. I sweated over it for days; checked all my spellings and everything. I put it on Mr Rime’s desk on Friday afternoon and waited modestly all weekend for the recognition I was sure would be mine on Monday morning.

I was devastated to see ‘1/10’ and ‘this is not an essay’ scrawled across the page in red ink.

It was much later that I understood the word ‘genre’ and the absolute necessity of researching your market.

I didn’t let it undermine my confidence. In fact, a year or so later, Graham Greene’s A Burnt-out Case was published and I did wonder at the time whether he had somehow managed to read my geography homework.

But the way before me was more treacherous than I knew.

I soon found myself thigh deep in the quagmire of knowledge. The burden of footnotes, citations, bibliographies, examinations, and parabolic curves, sucked me back into the gore with every step until I had to abandon my stories by the wayside to avoid sinking into oblivion.

Eventually, I scrambled clear of the swamp. The path narrowed, passing through a cleft in the rocks, and suddenly I was engulfed in a seething, yabbering river. At first I was tossed about and dragged below the surface, struggling for breath. But once I learnt to swim, the turbulence was exhilarating; the scenery we swirled through intrigued me; and I was fascinated by my fellow swimmers  – like me, gasping for air and striking through the current.

There were respites – still pools and shingly banks where I wrote journals, features, even books about my work and travel  –  but there were no stories.

As rivers do, it slowed its pace approaching the sea. Before it sluiced me out to the final destination, I waded ashore and trekked to the hilltop of tranquility from where I could view the distance covered. Here I rested. And here I planted a forest and watched it grow.

During those quiet years, slowly, stealthily, the characters sought me out and insisted on their stories. I had grown accustomed to the stimulus of colleagues, events, and storms in canteen coffee cups, to fuel my writing. Now, my characters demanded the creation of their own world, but there are no colleagues in the workplace of my mind. I can share the reality of my imagination only through the written word. Where would I find the inspiration and feedback to satisfy my characters?

The way revealed to me is long but passes through sweet meadows.

I enrolled in a writing course; my friend enrolled too – my first travelling companion. We found another aspiring writer in our small community, and then two more. We are unofficial: no ‘business stuff’ to gobble time; no pecking order – a band of word guerrillas ambushing the world of letters. When one wins a competition or is published, the euphoria is multiplied, and we are caring critics of each other’s tender creations.

We write different kinds of stories in distinctive styles but we are all readers who understand the struggle to find the right words. To see my story through the eyes of another can release that lightning moment of insight.

Our lunchtimes together are too short – we have to talk with our mouths full. There is a delicious déjà vous in that for me. And as Sebastian has long since reached the celestial kennels, I value instead the sharp ears and wagging tales of my fellow travellers.

Our band of scribblers is starting its writing journey in a small town whose motto is ‘where journeys begin’. We each have different ambitions, and our fingers have to tap those keys alone, but companions on the journey can enrich the whole person that is the writer, and encourage those fingers to tap their way to new heights.

This post was written six years ago, the first post on my first website. It proved to be an extraordinary beginning. During the intervening years I wrote dozens of short stories, some of them winning prizes, and produced six non-fiction books: three travel-related, and three story-related. But there was also something else going on: research and frantic scribblings for a project dear to my heart that I called my ‘magnum opus‘.  An idea that would not let me go, but such an ambitious project that I was never entirely sure it was even possible, until reviewers assured me that it was. You can judge for yourself: A Biography of Story, A Brief History of Humanity.

And here are the reviews on Goodreads.

Since Story was published, I have continued my writing journey combining a storytelling style with non-fiction in my fascination with history and with travel, which you can read in, Passionate Travellers: Around the World on 21 Incredible journeys in History

also available as an ebook on Amazon.