Ferrari or Ford fiesta, the inside of a moving vehicle offers special opportunities for a writer. 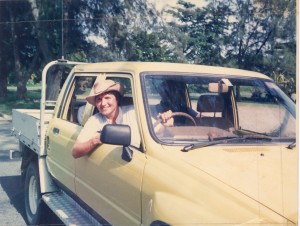 I’m not suggesting you actually write while driving: I have as much vested interest in the safety of other drivers as the next person. It’s more a matter of making the most of the opportunity whether as passenger or driver.

A moving vehicle is a detached and private world: no-one can walk in on your conversation and you can’t stomp out and slam the door. The intensity of an encounter can increase by this enclosure in a moving capsule – seclusion felt variously as liberating, protective, intimate, threatening, or imprisoning. And it often results in change.

I feel conscious of a certain privileged situation in time and space in a moving vehicle; the limitations on my actions seem, temporarily, to suspend both. Social anthropologists call this a liminal state (in limbo): neither here nor there; an in-between status, suspended from the main flow of events. This may become exasperatingly vivid in a rush hour traffic snarl-up.

Most cultures recognise these transitional states as special and often dangerous, requiring ritual to ensure a person’s safe passage through the social no-mans-land, and a return to normality in a new role. Initiation into manhood, weddings, and funerals are all rites of passage that include elements of seclusion or liminal states before people take up new roles as adults, in-laws, or widows.

The other interesting aspect is the limited eye contact between driver and passenger – well, one hopes so or the outcome could be dramatic and the change in status terminal. The point is, people often open-up, talk about what’s on their minds – almost talk to themselves – when there’s not much else to do and they have a captive audience with limited eye contact.

As a writer, I use these opportunities in three ways:

I have a friend who talks non-stop whenever she is a passenger in my car. Whether this is an indication of how nervous my driving makes her, or whether she simply needs the occasion to off-load, I’m not sure. Either way I learn a huge amount about human nature, family life and local gossip. I do miss bits, tuning out for a moment to negotiate traffic but I usually pick them up the second time around.

It depends who is driving, but sometimes I can ramble aloud and productively through ideas for my WIP, uninhibited by rays of boredom from the eyes of my listener, or the risk of interruption as a critical thought emerges. It is much better than talking to one-self. Sometimes it even keeps the driver amused.

In the back seat you have a third person point of view appreciating interaction between driver and front seat passenger – especially with judicious use of the driver’s mirror.

A vehicle scene can increase pressure on characters: by their proximity, fear (either of the driver’s ability, crazy traffic, or the situation), tension because of delay or destination, or more obviously in car chase or abduction scenes. All of these can show new aspects of character or highlight unexpected traits.

The in limbo status is particularly useful and a wonderful opportunity for dialogue. A normally reticent character can become garrulous. Under the liberating influence of limbo, a character may say things that delight, anger or horrify the listener. Exchanges may reveal to a character, aspects of herself that she was not aware of.

I have to remind myself, though, not to leave the readers in limbo: to recall for them subtly from time to time that we are in a moving vehicle, otherwise they can experience a nasty shock of disbelief when we hit the kerb at the next corner.

For more tips and techniques for planning, writing, editing, publishing and selling your book, see Writing Your Nonfiction Book: The Complete Guide to Becoming an Author

And if you love stories, you should read the new cultural history, A Biography of Story, A Brief History of Humanity, on the power of stories in the comedy and tragedy of human affairs from our foraging prehistory to the digital age.

7 thoughts on “Write Behind the Wheel”