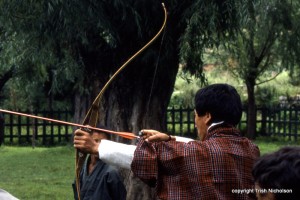 Archery – datse in the Dzongkha language – originating in ancient warfare and hunting, is the national sport of Bhutan practiced by everyone from the King to a village school boy.

Datse tournaments are held regularly at local and regional levels throughout the country, and as part of the yearly tsechu religious festivals, and Losar, the New Year celebrations. Astrologers divine auspicious days for matches, but every village has an archery field; wherever, whenever you visit Bhutan you will find at least a practise match.

Traditional Bhutanese archery requires not only great strength to flex the bamboo bow, but speed and agility to avoid the arrows, because team members surround the target during shooting. A tournament is a festive and noisy event of song, dance and ritual. The archer’s team calls out encouragement, praising the player, the bow and the arrows while members of the opposing team hurl insults. Such repartee can reach a high level of intellectual challenge with symbolic and literary allusions. The ability to respond in like manner becomes almost as important as shooting the arrows.

Spectators join in the mayhem, women singing their distinctive brand of sharp insolence to the opposition, and boosting the morale of their own archers. Complicated rules for scoring can extend a tournament for days, even weeks.

Like everything in Bhutan, datse is embedded in religious mythology. King Langdarma, the last ruler of a unified Tibetan Empire, whose persecution of Buddhists in the 9th century almost wiped out Tibetan Buddhism, is said to have been assassinated by a bow and arrow concealed in the robes of a Black Hat dancer performing to entertain the king.

Originally a male preserve – considered bad luck for a woman even to touch a bow – datse now fully embraces female archers. Bhutan has fielded a women’s Olympic archery team since it first participated in the games in 1984. Some of the best archers are women. 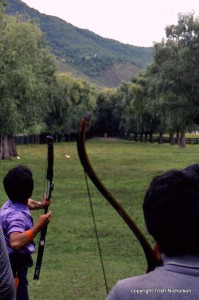 “The range is 130 metres with target boards at both ends. Each archer in a team releases two arrows at one target before the team changes ends. Amidst much movement and noise, the players distinguished by their red check ghos, a brief expectant silence precedes the deep satisfying thwang of the bow string as each arrow is released…

Accidents do happen. During coronation festivities for King Jigme Singye Wangchuck, foreign dignitaries were invited to try their hand at the sport. A powerful performance by Sir Michael Walker, then Britain’s High Commissioner to India, let fly an arrow that pierced the leg of a bystander who had not dodged from the target area fast enough – or far enough.”

Excerpts from the illustrated e-book travelogue: Journey in Bhutan: Himalayan Trek in the Kingdom of the Thunder Dragon. 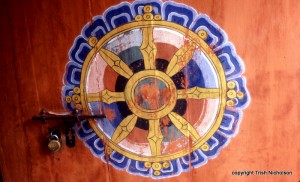 One thought on “Travel Tales of Bhutan: Olympic Archery”