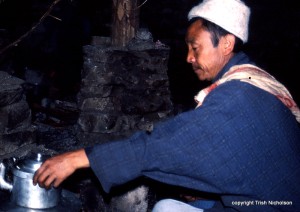 Enjoying a holiday in distant lands it is easy to forget that those around us are working, and yet, taking an interest in people’s everyday lives is an excellent way to understand another culture.

If we are trekking, one of the most important people around us is probably the camp cook. Camping menus in Bhutan are quite sophisticated these days, but during our trek the cook achieved mouth-watering results with basic local produce like pink rice, pork and cabbage. Like a magician, he guarded well his recipes and their secret ingredients. 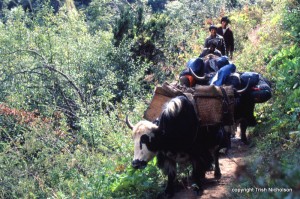 The rest of the crew, too, spend many days away from their families to ensure the safe transport of supplies and baggage, put up tents, bring us morning tea, and the many ‘invisible’ tasks that make a trek memorable. Handling yaks requires skill and patience. Never entirely domesticated, they are irascible creatures. It takes three men to hold down a yak for a seasonal light trim of its long, tough hair – to weave into blankets, rugs, bags and, of course, yak hair tents.

Yak herders wrest one of the most challenging livelihoods from Bhutan’s unforgiving environment. In high altitude summer pastures, their tents must withstand gale force winds and sub-zero night temperatures. With no trees to replace them, wooden tent poles are precious possessions, along with batteries for a transistor radio, if they have one – the only source of outside news.

While men and boys herd in the mountains, women and small children usually stay in their stone winter houses at lower altitude. And sometimes they cater for passing travellers, offering sudja (butter tea) and snacks of chogu (smoked yak cheese). 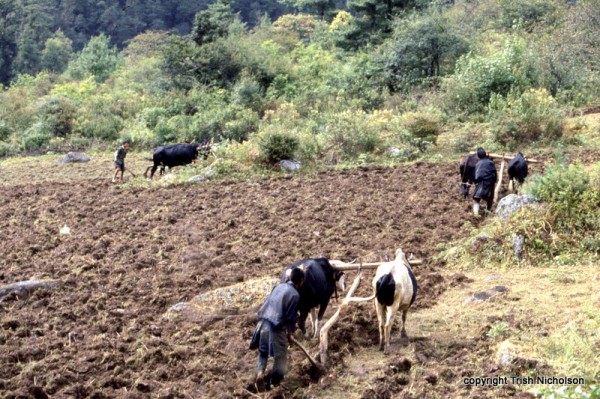 Ploughing the hard way with a sling-plough – still used in much of Bhutan. The national government’s intention for Bhutan to become the first nation in the world to farm 100% organically is an achievable target, because the country has not been subjected to the agri-business of rapacious foreigners, nor misled into inappropriate high-input models of rural development.

This is more difficult than it looks. I tried threshing with this traditional method, but the two articulated sticks have a will of their own, making more impact on my feet, or anyone silly enough to stand close to me, than on the grain. It’s probably better to leave the threshing to the experts and just enjoy the songs and dances of harvest celebrations. 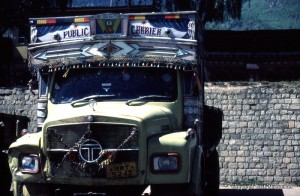 I have a special respect for the people who spend their working lives driving Bhutan’s picturesque and precipitous roads, gladly forgiving the blaring horns and cacophony of pop music blasting out from the cabs. In the interests of public safety, there is no ‘self-drive’ in Bhutan: you need to hire a local driver with the car.

Wondering through side streets, villages and monasteries you may come upon some of the many superb craft workers – painting elaborate designs on furniture; fashioning silver and copper ware; sculpting clay; carving wood, or weaving. 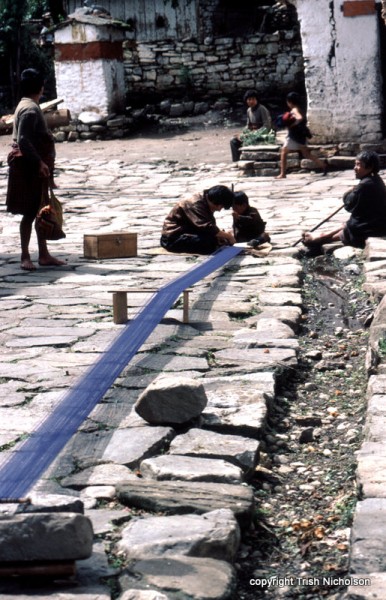 Setting up the warp for what is probably going to be a kera – long, colourful belts wound around the waist to secure the traditional Bhutanese dress for women, the kira. Weaving is done by women, working a range of large and small, hand or pedal looms, using wool, silk, cotton or combinations of these. Each intricate and vivid design has a specific name and is characteristic of a particular district.

If you are travelling in Bhutan, you can ask your guide to arrange a visit to see work of special interest to you, whether it is art, craft, teaching, farming, cooking, or some other occupation. 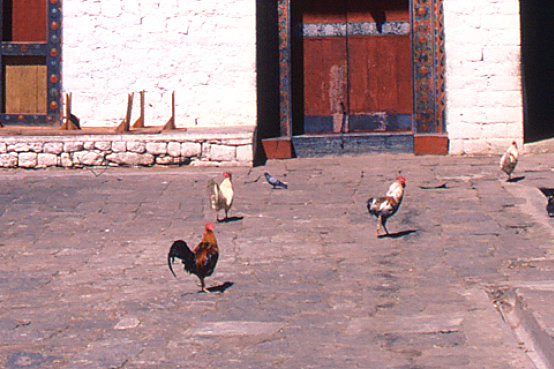 “I ask Ngawang why chicken seems to be on the menu so rarely. With Ngawang translating, the farmer tells us of an old country belief that after death, before it is determined in what form one is reincarnated, a chicken represents one’s good deeds by placing white stones on the scales of judgement. Bad deeds are counted in black stones placed on the scales by a pig: there is less compunction in eating a pig.”

Extract from the illustrated e-book travelogue:  Journey in Bhutan: Himalayan Trek in the Kingdom of the Thunder Dragon.

4 thoughts on “Travel Tales of Bhutan: what about the workers”