Come back with me to stroll through my favourite city. There’s plenty of accommodation, but a special treat in Inverness is to stay with a local family in a B&B. Years ago, signs outside Bed and Breakfast establishments would boast of “H & C” in every room – that was your washbasin for a skinny-lick in the morning – but now it’s en-suites, televisions, wi-fi, and central heating. The big breakfast is the same though, nowhere in the world beats a Highland breakfast. On the north side of the river, between the Cathedral and Greyfriars Bridge (the one with the snowflakes shown below), whole streets of lovely, old pink sandstone houses offer hospitality to visitors. In keeping with the Highland character, I’m sure they’re all friendly, kind and generous, (yes, generous, I don’t know where the ‘mean Scot’ slander started; it doesn’t apply to the Highlands), but I can only sleep in one bed at a time, and I started at the Torridon Guest House in Kenneth Street and was too comfortable to move on. The warm welcome began with a ‘key to Inverness’ along with those for the front door, and breakfast started in the usual way with a choice of juices, cereals, yogurts and fruits, 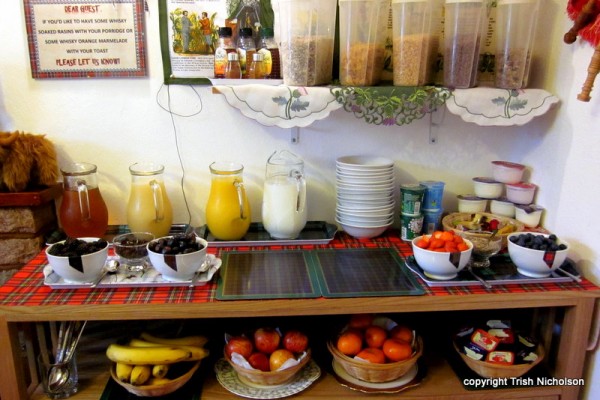 including grapes, strawberries, blackberries, and…mmm…let’s have another look at those luscious local blueberries. 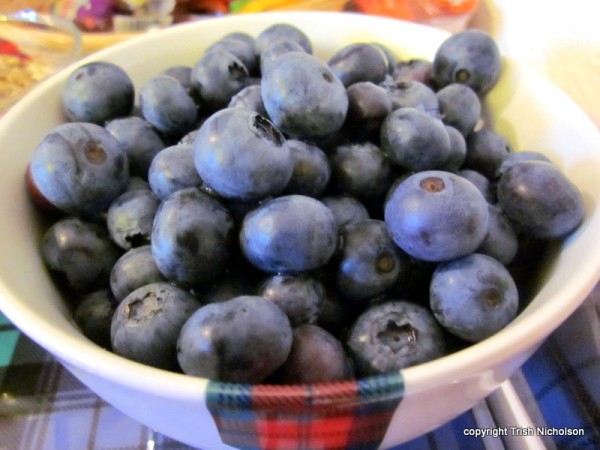 And then the menu card lists eggs (any way you want them), bacon, mushrooms, black pudding, tomatoes, white pudding, sausages, beans, ham, haddock and on, and on, but if you’re not up to making decisions at that time of the morning – you can have it all!  The rooms are cosy rather than large, but I prefer traditional highland ambience to an anonymously modern hotel, and wi-fi in the rooms is free – the choice is yours. Full to the gills, I took my camera for a wander through town, crossing the river over Greyfriars Bridge which bounces disconcertingly when more than one person walks along it, so I had to wait for a quiet moment before photographing the snowflakes. 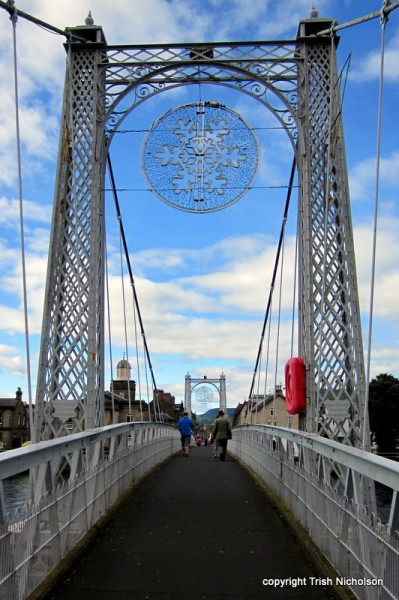 The paved High Street is for pedestrians only, and the original elegance of its architecture is still in evidence, 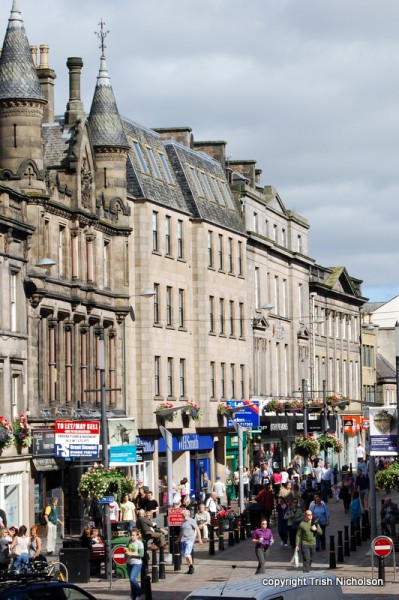 and especially in the Town House – a council office hard to beat for grandeur. 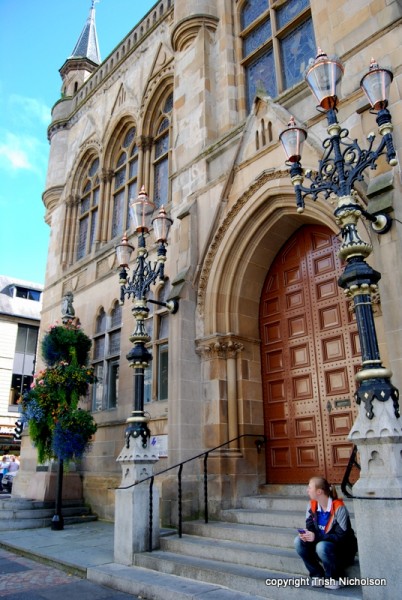 There are lots of places to sit, which is good, because you never know what may be going on: craft markets, street performers, parades, or a few young pipers and a one-man band – 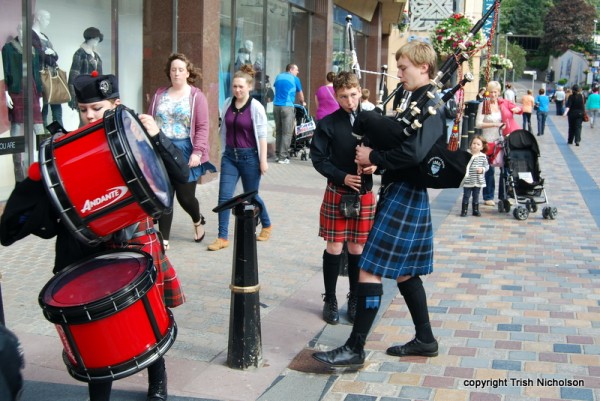 At the far end of the High Street, opposite the swish Eastgate Shopping Centre, a series of murals depicts not only well known stories, but a local character who would be amazed to find himself adorning a public place in Inverness City. 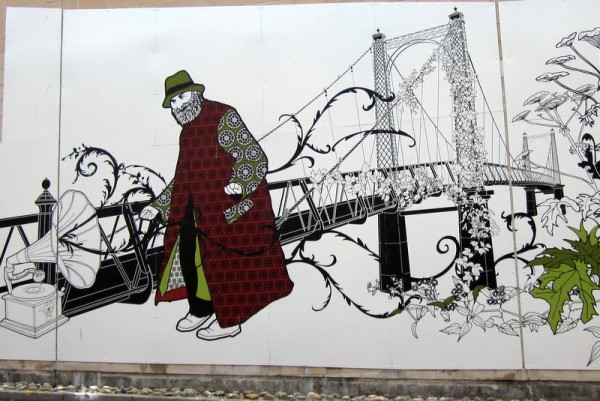 Let me introduce, Pockets: so nicknamed not because he picked them (I don’t think so anyway, although he was a poor man), but because of all the pockets in his cast off clothing where he placed the coins he begged.

This faded old photograph of him (date and photographer unknown) is in a fascinating book: Old Inverness in Pictures, by Loraine MacLean; still in print and listed on Amazon.       If your breakfast is starting to wear off,  we’ll pop in here for a refill. 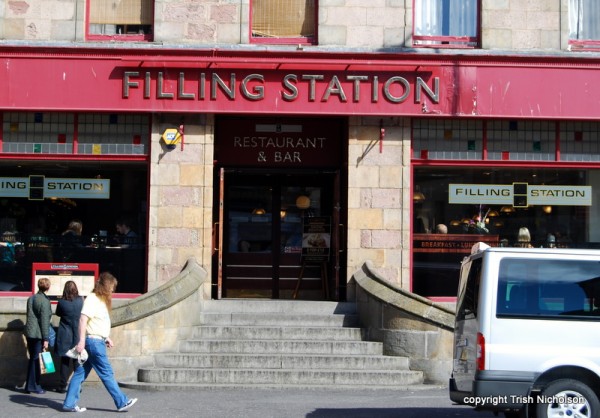 And then cross the road to roam around the old, but revitalised, Victoria Market, which is likely to erode both our time and our spending money. 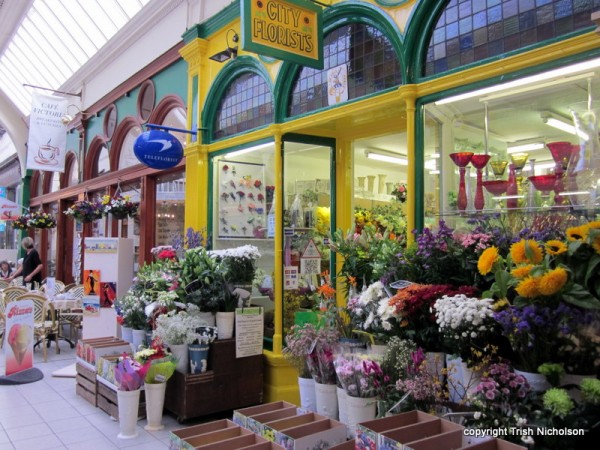 Tradition is never far away in Inverness, and along Queensgate, one of my favourite characters is still there to greet me with a jolly grin, 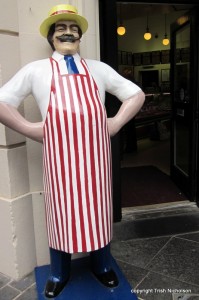 Duncan Frasers, Butchers, have been in town a long time: they’ve just celebrated their centenary, 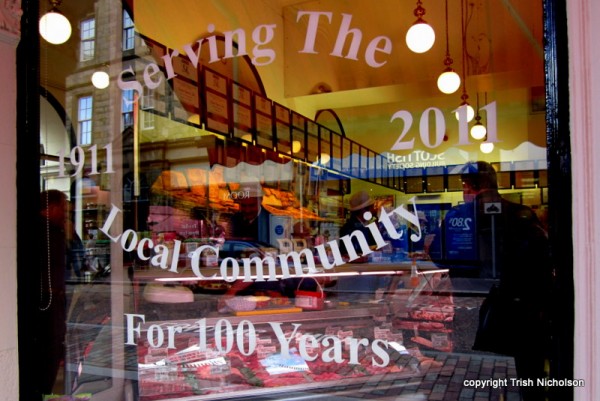 The pavements are not lined with gold, but these brass oak leaves form a lovely setting in front of the oldest secular building in the city, 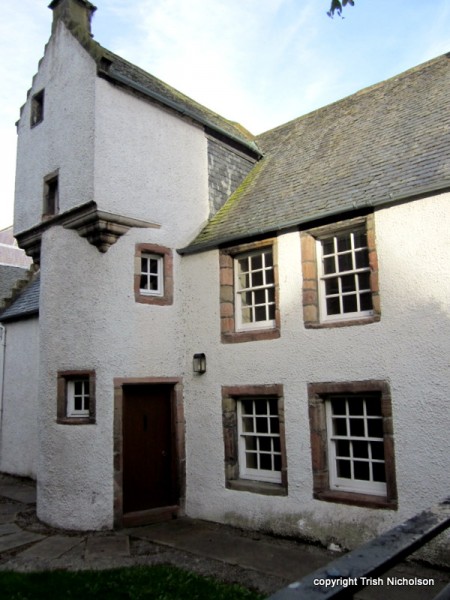 Abertaff House: built in 1593 as a town residence for the Frasers of Lovat. The same Frasers whose descendants lived at Eilean Aigas in Strath Glass, mentioned in the first of these Highland posts (Hidden Gem in the Scottish Highlands). And do you know why the humble thistle, the scourge of farmers, is the beloved emblem of Scotland? It goes back a long way: Alexander lll of Scotland routed the Viking King, Haakon, at the Battle of Largs in 1263. Planning to take the Scots by surprise under cover of darkness, the Vikings crept over the ground in bare feet, but when one of them trod on a thistle his cries of pain alerted the Scots. Thank you for joining me for this bit of nostalgia. This is the last of three posts on the Highlands for the time being, and as usual, no one has paid me to write anything here – it’s all for love, but if you would like to know more, here are some useful links: a free Smartphone App for Inverness > >  http://www.miinverness.co.uk the city’s information site > >  www.inverness-scotland.com and the National Trust site for Inverness > > www.explore-inverness.com  ‘I’ve been a wild rover for many a year’, so if you enjoy travelogue that carries you away to new places, try my recent eBooks Journey in Bhutan: Himalayan Trek in the Kingdom of the Thunder Dragon  , and Inside the Crocodile: The Papua New Guinea Journals, also in paperback here.

8 thoughts on “The Key to Inverness”