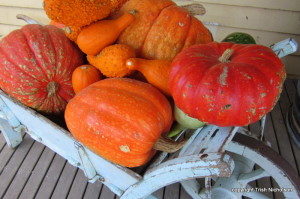 Part of Australia’s magic is that while snow nestles against rocky peaks, and dripping jungle throbs with life, desert sands could grill a T-bone steak. But the distances are great: you can’t have it all at once. 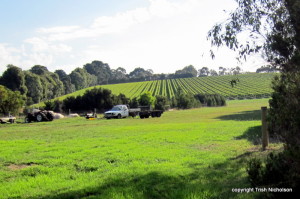 Last week I was in the Mornington Peninsula, an hour or so drive south from Melbourne and their particular wizardry is wine. Within a 20 km radius, at least 50 vineyards offer tasting, tours, restaurants and cellar sales, including hand-crafted artisan wines in family-run wineries – a gourmet’s paradise. (If you nurse a degree of snobbishness in your palette, be aware that Australian wines have pretentions to grandeur: in the duty free shop in Auckland airport was a single bottle priced at NZ$559 (roughly £300) – no, that’s not a typo). 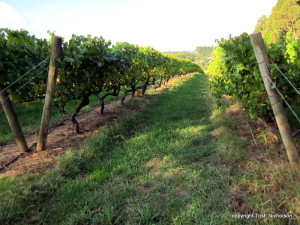 A world away from city wine racks the intimacy of these vineyards lets you sip wine from the third vine on the left before trying the fourth one down on the right. Lush names swirl over the tongue: Pinot Noir, Shiraz, Chardonnay and Cabernet Sauvignon. For lunch or dinner it is essential to book and bring a well stacked wallet – some venues charge $70-$80 for a one-platter deal. 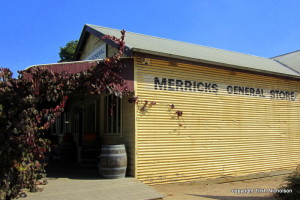 We settled for lunch at Merricks General Store. Now a wine cellar and restaurant with 80+ covers, it began in 1924 as a shop and post office serving the scattered rural community.

On previous visits to the area years ago I bought bread, coffee, handicrafts and birthday cards there, and being protected as historic heritage, it has retained its traditional appearance. 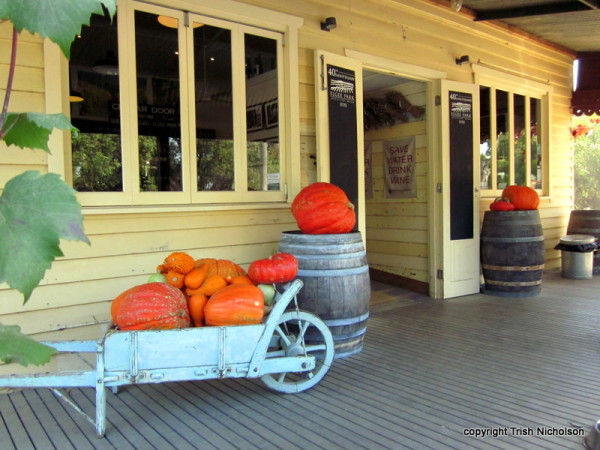 They still sell milk and stamps during the week, but this time, I bought freeze-dried strawberries coated in thick dark chocolate to accompany the wine.

And what better place to enjoy it than my friend’s terrace. Next summer, she’ll be able to pick grapes without getting out of her chair. 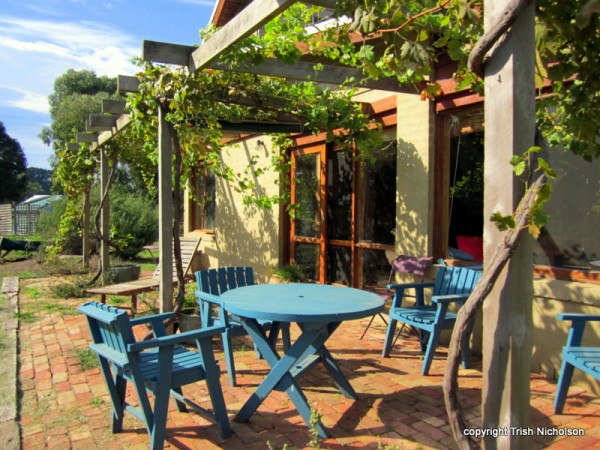 I walked-off my lunch around the garden, under some of the trees I saw planted ten years ago and now towering overhead. 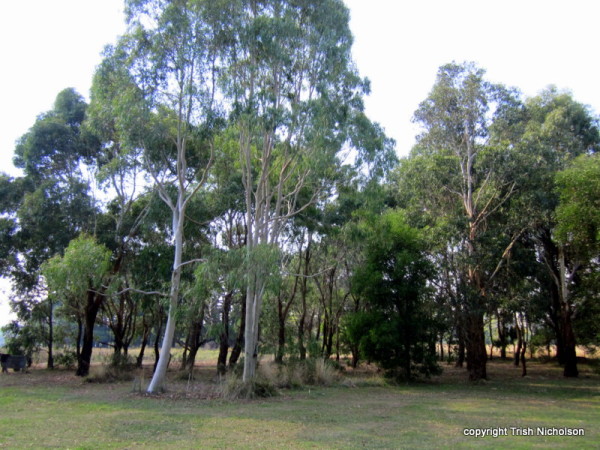 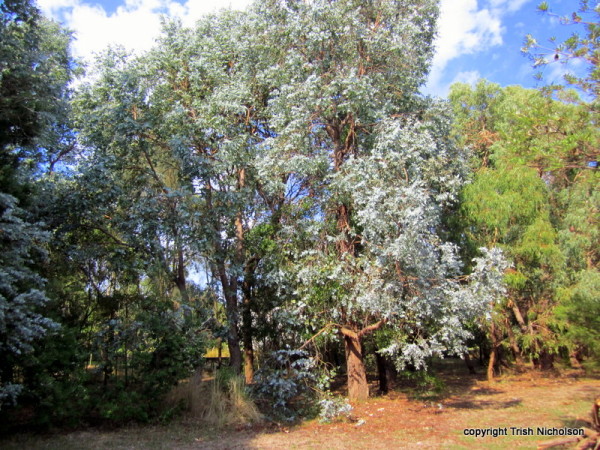 And in the grass lurked not The Tin Man,

but a tin cow. 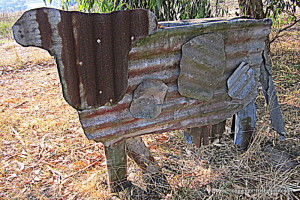 By the way, there is nothing wrong with this naked tree, some gums are natural ‘strippers’, shedding bark like a snake sloughs off its skin.

With spot-on timing, a King Parrot posed for me in the fig tree.

Equally colourful is the Cubby House, a favourite place to exercise teenage independence. 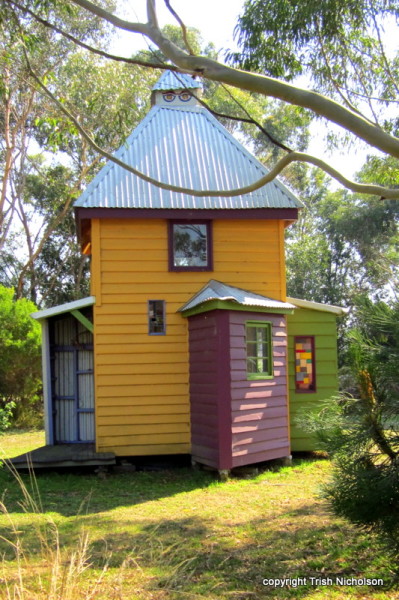 A downside of the farming boom is destruction of native habitat. Koalas, such fussy eaters that only certain Eucalypts will suit them, are rare in the area now, but on an earlier visit these cuddly-looking, razor-clawed marsupials were a common sight on my friend’s property. 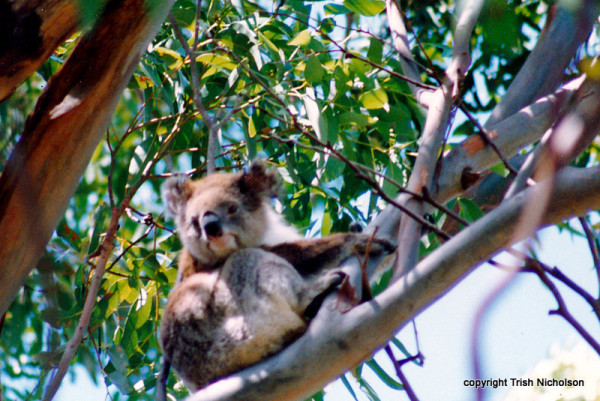 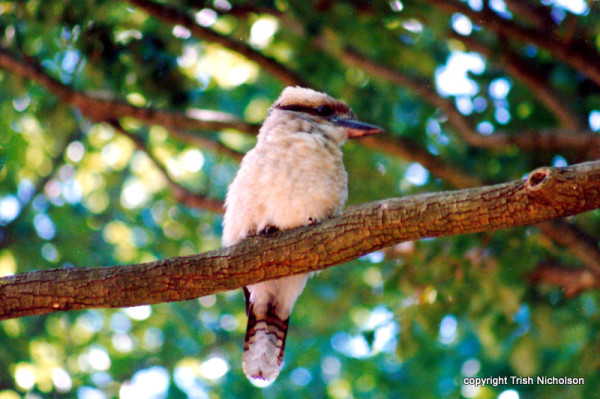 Mornington Peninsula is long and narrow – a beach never more than a few kilometres away – with many small communities sporting such evocative names as Rosebud, Sorrento, Mount Eliza and Bittern. As well as booze and berries, birds and boats are everywhere.

The energetic can walk along the coast, in the national park, or through the wetlands and woodlands of Coolart Reserve near Somers, exploring also the 19th century homestead at its centre. No wonder half the population of Melbourne pours into the area at weekends.

It has been a long dry summer on the Peninsula. I did what I could to conserve water: 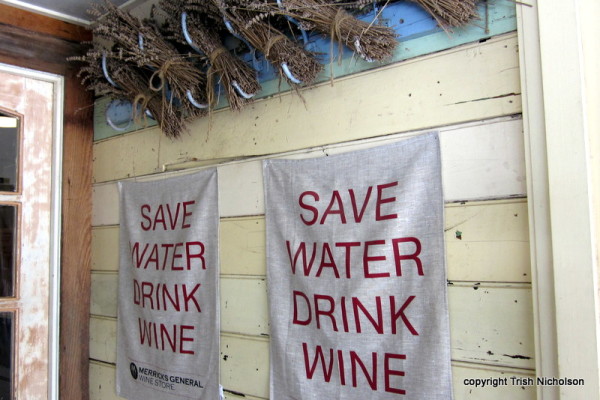 4 thoughts on “The Wizardry of Oz”