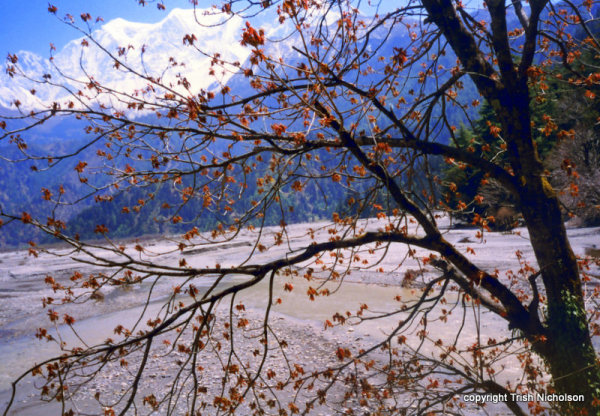 It wasn’t that Bashō travelled widely, but that he journeyed deeply. Although he walked 800 kilometres on his second trip, he stayed within his own country – Japan. Inland travel was difficult and hazardous in the 17th century – trade between Osaka and Edo (Tokyo) was by coastal sea routes – and few people ventured through the interior without a special reason.

But he knew that what makes us true travellers is not how far we go, but how well we see. In his travel tales he recorded in prose and haiku the tiniest details of places and people that portray atmosphere and release emotions.

Indeed, one of the greatest pleasures of travelling was to find a genius hidden among weeds and bushes, a treasure lost in broken tiles, a mass of gold buried in clay, and when I did find such a person, I always kept a record with the hope that I might be able to show it to my friends.

Among the literary conventions that surround the writing of haiku, most notable in Bashō’s verses are references to nature that evoke place, and the second part arising from the first two lines that reveals an association from deep in the poet’s consciousness, the meaning of which may seem opaque on first reading.

I picked my way
Through a mountain road,
And I was greeted
By a smiling violet.

(Smiling gentians on a mountainside in Bhutan).

In a way, his whole life was a journey seeking that inner world, what he called ‘the true self which is a poet’. Although known as Matsuo Bashō, that was not his original name. It was customary for poets to take pen-names, and for favoured students to be given a pen-name containing a syllable from that of their teacher. But he took the name ‘Bashō’ (a species of banana plant) from a favourite tree whose generous shade he sat under beside the small hut his admirers built for him – wry humour is rarely far from his writing-brush however tragic the circumstances.

The leaves of the Bashō tree are large enough to cover a harp. When they are wind-broken, they remind me of the injured tail of a phoenix […] I love the tree, however, for its very uselessness … I sit underneath it, and enjoy the wind and rain that blow against it.

His father was a minor official in the local feudal court, and Bashō was engaged as a young boy to be companion to the lord’s son, Yoshitada, sharing his education in classical literature. When Yoshitada died tragically young at twenty-five, Bashō, two years younger, ran away from his court responsibilities.

He was forty-years old when he first took to the road, having spent many years in studying, visiting fellow poets, and in lonely soul-searching meditation in his little house in Edo. In 1684, he gathered his straw sandals, paper raincoat, padded cotton jacket, ink block, brush and paper, and set out walking east, up into the mountains and along the valleys as far as Yoshino. The eastern fringes of the country were inhabited by ‘barbarians’, peoples not then under the control of the government and its regional forts, but he travelled unarmed.

I do not wear a single piece of metal on my belt, nor do I carry anything but a sack on my shoulder. My head is clean shaven, and I have a string of beads in my hand. I am indeed dressed like a priest, but priest I am not, for the dust of the world still clings to me.

His route was serendipitous; he stopped for days or weeks at shrines, or with other poets, and wandered back along the coast, returning to Edo eight months later. Literary circles welcomed him back; his poetry was well known and he published several anthologies, including an account of his recent travels, The Records of the Weather-exposed Skeleton.

At home, while being entertained by his friends, he indulged in an earlier, lighter form of poetry in which each took turns to write linked haiku, creating long poems in the form of witty repartee. But not only the dust of the world, but also imperfections he sensed in his inner being continued to torment him, and after a trip to Kashima Shrine, he left on a second journey lasting almost a year.

This second walk followed roughly the same route as the first, but extended further, and at the beginning of his travel account, The Records of a Travel-worn Satchel, he refers to something inside himself as a wind-swept spirit, ever since it began to write poetry, it has never found peace with itself. What had begun as a pleasant pastime had taken possession of him.

Religious themes in prose and poetry of this period are rare, and it helps us to appreciate something of Bashō’s self-searching if we understand that, although Buddhism and Shintō were still practiced among the general population, Japan at that time was largely secular, intellectuals focused on rationalism and a search for reality and truth.

With decisive intent, Bashō sold his house, and for the next two-and-a-half years he tramped on his third long journey, following a new route north of Edo to Shiogama, over rugged mountains to Sakata, and south along the coast of Honshu to Ogaki – across the lake from his native village near Kyoto. His lifestyle was ascetic in the extreme. Over the years he had sought detachment from all worldly concerns, immersing himself in nature; this journey was his attempt to disengage from the only item he had left – himself.

In his best-known travel sketch, The Narrow Road to the Deep North, he describes this pilgrimage in prose and haiku that achieve perfect harmony. He walked along roads so thick with white blossoms it looked like snow; gazed at waterfalls and chestnut trees that recalled ancient poems; sipped tea in temples, and composed haiku with poets he visited.

As those who travel to resolve difficult situations or to find new lives will have discovered: we cannot avoid taking ourselves with us, we are always part of the problem as well as part of the solution.

On his return, Bashō shut himself away completely.

Only for morning glories
I open my door –
During the daytime I keep it
Tightly barred.

If we had stood outside his window we would have heard only his faint scraping on his ink block. For almost three years he lived as a recluse, composing many verses, until 1694 when he began his last journey at the age of fifty. He intended to walk to the extreme south of the country.

His writing on this journey shows an almost prescient gloom, for he reached no further than Osaka before he fell ill and died.

Bashō’s spiritual suffering has left us with exquisite prose and poetry. And his advice to poets is eternally relevant to all writers:

All quotations are from the translation of Nobuyuki Yuasa in, Bashō. The Narrow Road to the North and Other Travel Sketches, Penguin Classics, 1966 – a little book to treasure.

Background on the Edo period is from Professor Masahide Bito in, The Great Japan Exhibition: Art of the Edo Period 1600-1868, Royal Academy of Arts, 1977. A memorable exhibition I have enjoyed ‘re-visiting’ as I write this post.

If you missed the first in this series, the travels of Mas’udi, it is here. And the second one, on a journey to Lhasa, is here.