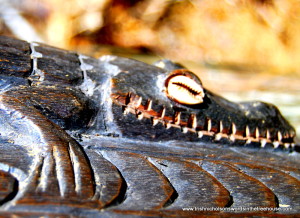 I’ve been asked several times why I chose Inside the Crocodile as the main title for my recent travel/work memoir.

Crocodiles are common in Papua New Guinea’s lowland rivers and they have in many ways become an emblem of the country itself: Papua New Guinea’s annual literary award for poetry, prose and journalism is called The Crocodile Prize.

I have seen crocodiles in the wild; put up with them tied up in vines, squirming around my feet while giving a training session; watched them in crocodile farms, and even eaten crocodile steaks – which to me had the appearance and taste of pork. Crocodiles are magnificent and dangerous creatures.

But there was another special reason why I used them as a metaphor for the country. Unlike many writers of travel books, I was not passing through Papua New Guinea, even on an extended trip. I lived there for five years, working with provincial government on a development project. Based in the remote Sandaun Province (West Sepik) adjacent to Irian Jaya (West Papua) in Indonesia, I visited as well in other areas and islands: Manus, Bougainville, Wuvulu, the Southern Highlands, and now and again, in Port Moresby, the capital.

My job was to work alongside local officials to help strengthen the management and delivery of public services by designing and offering training courses and offering management assistance. This also involved setting up a local human resources unit and training a team to run it. Although part of a development project funded by a World Bank loan, I worked within the local staff structure – on the inside – and had to cope with the same conditions and tangles of bureaucratic red tape as my Papua New Guinean colleagues. We found solutions together.

Because all-season roads are few in Sandaun, I travelled almost every week in tiny planes to rural districts and remote base camps. The great reward for me was working with people in villages and out-stations as well as those in our one small town of Vanimo. It meant that I spent a lot of time with women and children as well as men and could share their stories. Local women are often ‘invisible’ in accounts of ‘adventure travel’ and I wanted their voices to be heard.

And although I was working there, my life did not lack adventure: struggling through jungle in the dark on the hair-raising trail from Oksapmin to Kopiago; driving The Beast through creviced mud tracks and over disintegrating bamboo bridges; fending off ant invasions, and fighting almost-fatal malaria saw to that. Battling with central bureaucracy and defending myself against raskols – Papua New Guinea’s own style of ‘bandits’ – were something else again.

Even my companion, Frisbee – the dog left to me by the project officer when he ‘went finish’ – had her own adventures.

Everything was recorded in my personal journal which extended to somewhere around 600 pages by the time I left. As I studied them while writing this book, I realised that Papua New Guinea contains the wildest places in the tropics: being ‘inside’ is, like the crocodile, a magnificent and dangerous experience.

Papua New Guinea celebrates 40 years of independence this September. To learn more about this extraordinary, beautiful country and its people, read Inside the Crocodile: The Papua New Guinea Journals,

…and don’t miss the fascinating video.

If you’d like to see a reader’s review, there is one here by book-blogger Anne Mackle known on Twitter as @cassam101 “…so descriptive, I felt I was walking alongside...”

In a review in the Sydney Morning Herald, Gordon Peake @GordonPeake wrote: “With easy humour and affectionate prose, Nicholson has packaged together a lovely 40th birthday present for her once island home.”

And you can read the review from The Australian by ‘old PNG hands’, Phil Fitzpatrick and Keith Jackson, posted on the website PNG Attitude  “an alluring read…” 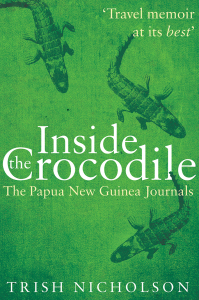 4 thoughts on “Why Inside the Crocodile?”