Certain images catch my eye anew even years after they were taken; they set my mind on a trail of thoughts often in diverse directions. I decided to share a few with you for this post in case they do the same for you.

The first picture is the trunk of a kauri tree (Agathus australis), a native of northern New Zealand and endemic: it grows nowhere else in the world. Much of the native kauri forest was felled for timber by European settlers; growing up to 30metres high with a smooth, straight bole for most of that distance it’s a woodsman’s delight. But the tree trunk in the photograph below is swamp kauri. It has been extracted from the deep peat swamp that formed around it (and preserved it) some 50,000 years ago when a natural cataclysm felled the entire forest. When worked, swamp kauri has a fine, even grain and dark-gold sheen; it is highly prized for designer furniture and for carving. 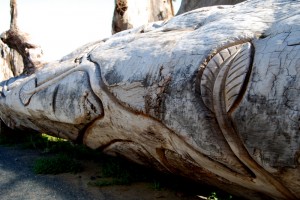 What interests me about this ancient fossil tree is that someone has carved leaves on it, as if the carver sought to release the tree’s own memory of what it had once been.

We may all look like ordinary people on the outside, but on the inside, we are each everything we have been since our conception – that is our uniqueness. And in our stories, it can make our characters unique if we think of them with this depth, letting our words carve their leaves on the outside. 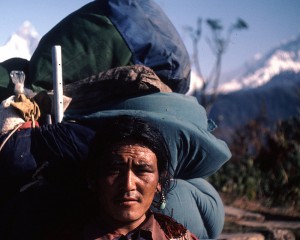 This portrait of a porter was taken – at his suggestion and to my delight – when I trekked the Annapurna Circuit in Nepal in the 1980s (the peak of Mount Machhapuchhare is just visible in the background on the left). During the three-week trek we talked often. A kind and thoughtful companion, Dhawa was a family man who struggled to support his children’s education so they could lead a different life, although he feared they would become like strangers to him.

I was reminded of this photograph when I learned that Barak Obama’s grandfather  was a Kenyan, who served as a cook in the British army, his grandson now the president of the United States of America, and I wondered where Dhawa’s grandchildren were and what they were doing. The potential in every human being is almost beyond comprehension.

Taken early morning inside the temple of Nefertari at Abu Simbel, southern Egypt, this photograph was one of those lucky ‘grab shots’ you get once in a while. I’d been examining the wall paintings and turned around, simultaneously pressing the shutter release and thinking a hieroglyph had stepped down from the wall to walk in the light. So many associations and spin-offs come out of this image I will leave you to experience your own.

What it brought home to me was the importance of being open and ready for inspiration at any time. 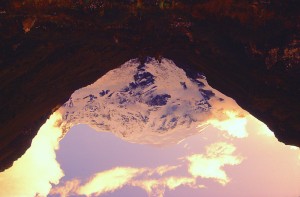 Puzzled? I hope so.

An artist friend told me that to appreciate a scene with fresh perspective you should bend down and view it from between your legs. Mount Chomolhari in western Bhutan is a shy mountain usually hiding behind cloud; sighting it at dawn was like a revelation, but seeing it upside down creates a whole new experience. (My travelogue of that amazing trekking experience, Journey in Bhutan,  is available as an eBook here> http://collca.com/jib )

(Confession: I cheated for this one, flipped the pic over in my picasa programme).

If you enjoy inspiration for creative writing, and creative reading, take a look at my new inspirational book > Inside Stories for Writers and Readers > http://collca.com/is  now available in a range of digital formats, and very soon as a paperback.