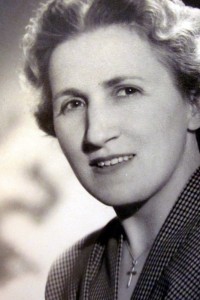 Like many daughters, I didn’t fully appreciate her qualities until I was an adult with my own experience of living. She was easily incensed by cruelty to children or to animals, and wouldn’t hesitate to intervene – on buses, in shops, in the street – if a child was being hit or a too-young puppy being dragged along on a length of string. As a teenager I wanted to melt into the paving stones; as an adult I sometimes had to rescue her before her target’s abusive language became physical harm. All her life she was mad about dogs and made many lasting friendships with other ‘doggie people’. She invested the same degree of generosity and loyalty to a wide circle of friends and acquaintance; whether they were members of the ‘county set’ or ‘bag ladies’ made no difference to Ma as long as they had a dog. 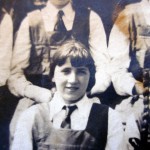 Her other great love was opera. As a girl she was taken to La Scala theatre in Milan, but I don’t think she had another opportunity to go to the theatre until I took her to Verdi’s Nabucco in Brighton for her seventieth birthday. All through my childhood a precious collection of old vinyl records in brown paper covers gathered dust under the bed for want of a machine to play them. But I can see her now at the low, stone sink of our farm-worker’s cottage, porridge-coated pan in one raised hand, scrubber in the other, singing arias from Tosca accompanied by Radio 3. When the batteries ran out she had to sing unaccompanied as we had no electricity, and didn’t always have the bus fare to go into town. 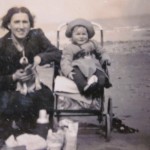 Ma had a beautiful singing voice, though few but I heard it. One of the unspoken regrets in her life was that she’d had no chance to use it. Unfortunately her singing genes passed me by but she inspired in me a love of music that has given me a lifetime’s delight.

Ma enjoyed writing poems. She never kidded herself she was ‘a poet’, she wrote for her own pleasure, musings about all sorts of things she needed to express, but she loved to share her poems with anyone who was interested. Had she known about blogging she would have been thrilled to have her poems here for others to read, so I’ve selected a few to share with you on her behalf. Not for critical acclaim; just in the hope that you might enjoy them.

The artist in this first poem was a dear friend of ours from Scotland.

I can feel the loneliness of snow,

Can look in wonder at the sunset’s glow,

Walk beside the cottage down the glen,

See the woodlands wrapped in mist and rain,

So many pictures, sombre, bright and warm,

Cascading water falling down a hill

To Lochs between the sands stretched out so still,

All these you give, I love and understand,

Created by an artist’s gentle hand.

Ma wrote this next poem in support of Mental Health Week one year.

A blistered heel or a broken foot

Are painful and hurt for a while,

But very soon heal without much fuss

And the tears disappear in a smile.

But a broken mind is a fragile thing

And it’s hard to discover the pain.

It’s hard when you lose your bearings

And you can’t find your purpose again.

It’s the nightmare of not knowing

How best to cope with the stress,

Or to understand what’s happened to you,

To explain why life seems a mess.

When you enter an endless tunnel

With no sign of a light at the end,

You are longing to find a solution

With the help of some caring friend.

So dark and deep are the realms of despair

Relentlessly robbing your peace of mind

As you desperately search for the light.

It’s hard to believe that you’re not all alone

Or to know that you need not despair,

For answers there are, and friendship too,

Living in Brighton later in her life, Ma didn’t have to go far to see lonely or homeless people; she would have brought them all home if she could.

Watching people down the street,

Where is his home? Has he a wife?

Or has he a friend to share his life?

So many people passing by

Give not a glance, nor wonder why

And makes no move, as if for home.

His heart more weary than his feet.

Old man you really ought to go

Homeward to your lonely room,

By someone, perhaps a friend or wife

Who shares with you a happy life.

Watching people down the street.

Why do they call when it’s dark at night?

As they fly by the streets reflected light

They seem to know when dreams are broken

Finally, another very short poem Ma wrote when her friend’s father died many years ago. I asked the vicar to read this one at her funeral. I’d like to have read it myself – but I couldn’t.

On the Death of a Friend’s Father

With the sigh of the wind

And the mist on the hill

There is peace now at sunset

And the rivers flow still. 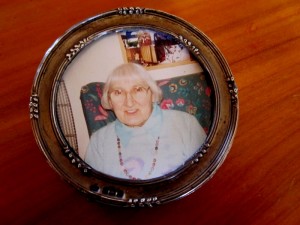 On Ma’s behalf, thank you for visiting, if you’ve enjoyed this post, please Tweet it for others to share her poems, just in case someone finds one of them helpful. That would delight her.

“Though lovers be lost love shall not; and death shall have no dominion.”  Dylan Thomas