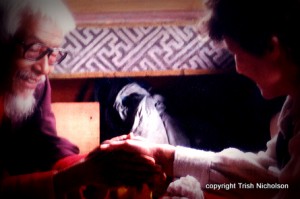 Most people fly to Bhutan, holding their breath for the nerve-racking landing in the spectacular Paro Valley. But we took the long way round – driving from Siliguri through the Darjeeling region of India to the border town of Phuntsholing. From there, the road to Paro twists and turns around precipitous mountain spurs, overlooking valleys veiled in wisps of low cloud: an exciting and intriguing entry to Bhutan if you have time.

When Major Francis Younghusband led his expedition of British Indian forces into Tibet in 1903, he followed the same route, pushing his 3000 troops further north through Sikkim, a corridor between Nepal and Bhutan. It was a bloody encounter for the Tibetans: 700 monks killed in one engagement at Guru. As a result, Tibet became a British Protectorate.

Joint leader of that incursion was political officer Jean Claude White (1853-1918), now better known for shooting with a camera. His were the first photographs taken of Tibet. Later, he travelled into Bhutan and tried to capture the wonder of that country, too, on film, and his images were the inspiration for my own visit.

“A couple of years ago, sorting through dusty boxes of old books and magazines left me by a favourite aunt, I came upon a National Geographic Magazine from [April] 1914. A book mark – a crinkly, yellowed invoice for marzipan (my aunt had owned tearooms) – drew me to the most amazing photographs of mist threaded mountains, exotic architecture, and distinguished looking men wearing what appeared to be navy blue dressing gowns with broad white cuffs. ‘Experiences and Journeys in Unknown Bhutan’ – had my aunt longed to go there herself? Was the marzipan marker a message of some kind?”

[Excerpt from Journey in Bhutan: Himalayan Trek in the kingdom of the Thunder Dragon.]

British political and trading ambitions in the Himalayas had already secured Assam, bordering the south of Bhutan, and they now claimed part of that area known as the Duars – trading routes in the foothills between India and Bhutan – that had been earlier occupied by Bhutan.

Despite the fact that Bhutan was emerging from a civil war, and had no standing army or modern weapons, it imposed several humiliating defeats on British Indian troops during the five months of intensive fighting that became known as the Duar War.

The outcome is written in history books as a victory for the British – but they wrote the books.

In fact, British Indian troops did not penetrate far into Bhutan and the two parties negotiated a settlement – the Treaty of Sinchula (1865). Under its terms, Bhutan ceded to Britain the land it had occupied in the Duars, and a small area of its own territory around Deothang. In return, ‘perpetual peace and friendship’ would be established, and Britain would pay Bhutan 50,000 Rupees per year. Bhutan remained independent.

By 1907, Bhutan was unified under the leadership of Ugyen Wangchuck, elected by a Bhutanese assembly as the first Druk Gyalpo (King of Bhutan). And in an updating treaty with the British government, the Treaty of Punakha (1910), the independence of Bhutan was guaranteed and its annual allowance doubled. In 1949, the territory around Deothang was returned to Bhutan.

The ultimate denouement, then, is that it lost none of its sovereign land, and is one of the few nations in Asia to have escaped colonisation – Bhutan has never been conquered.

To this blessing can be attributed much of Bhutan’s present capacity to adapt to modern geo-politics by establishing a constitutional monarchy in a democratic state; to measure its citizens’ welfare in Gross National Happiness, and realistically, to aspire to be the first country in the world to attain 100% organic food production. There is much to be learned from Bhutan as well as enjoyed.

Whether or not you can visit this remarkable Buddhist Kingdom deep in the Himalaya, I welcome you to share my experience of the mountains, the people and the monasteries in Journey in Bhutan: Himalayan Trek in the Kingdom of the Thunder Dragon.