Pedro Chaminé da Mota delights in sharing the antique treasures in his extraordinary collector’s bookshop at 26 Rua das Flores, in Portugal’s medieval city of Porto. It was sheer serendipity that I found it while sauntering in the rain looking for somewhere small and interesting to eat.

The outside was not spectacular. But the sign over the door said ‘Livraria’ – bookshop, so naturally, I went in to nose around. I found an illuminated cave of goodies, a smiling welcome and an elderly man beckoning me to follow him inside. 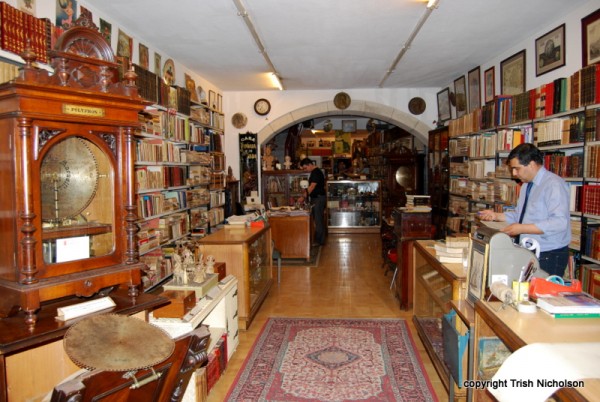 He started up this magnificent old Polyphon phonograph for me, playing the Marsaillaise. 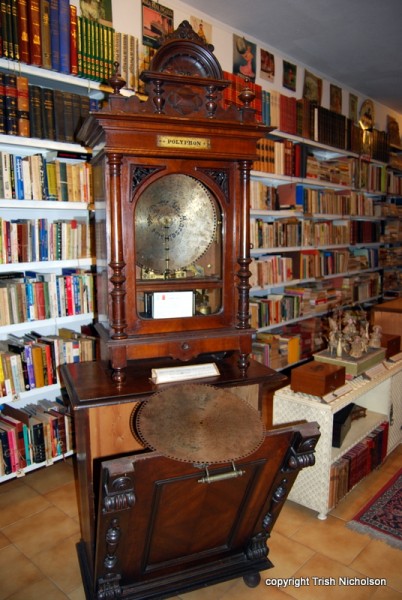 It plays discs with a rather different appearance to our compact variety. 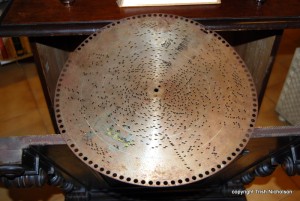 Although Pedro collects “everything”, the sign inside the shop door confused me a little.

“Perfumery?” His face radiant, he explained: “Ah, the smell of old books.” And indeed, the air was redolent with that distinctive aroma of the written wonder and wisdom of centuries. His oldest volume dates from 1516. 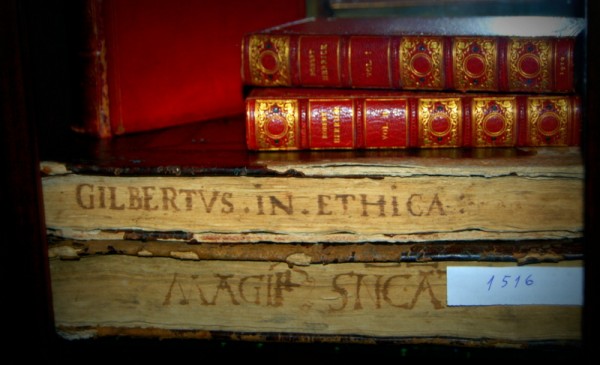 And if you are straining your eyes to read the titles of those red-bound 1912 volumes on the shelf above, it is Robert Merrick, volumes l and ll. Which Merrick, I don’t know; it is too early for a biography of economist and philanthropist Robert G. Merrick, Sr. (1895-1986) associated with the Equitable Bank and the University of Baltimore. Anyone got any ideas? If you are more into stories, you can buy a second edition of Tin Tin – in French. But there are old vinyl records, musical boxes, maps and art memorabilia as well as novels and literature. 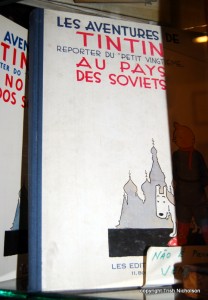 Assistants Nelson Silva and Joao Paulo showed me other bulging shelves contain dictionaries, lexicons, military and political histories dating from the 1700s and 1800s and, in keeping with the expansive vision of the age, a History of the Universe in heavy, golden leather binding, flaked and scored with antiquity. 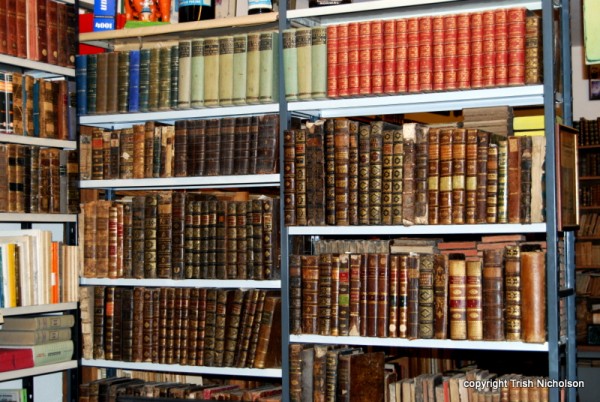 And then I saw two pieces of special interest to my Twitter friend @RobAroundBooks – book fiend and typewriter collector extraordinaire – and felt a keen responsibility to record them for him. First a neat little early typewriter that would suit well the ‘one finger’ typist – you simply point and press one letter at a time. 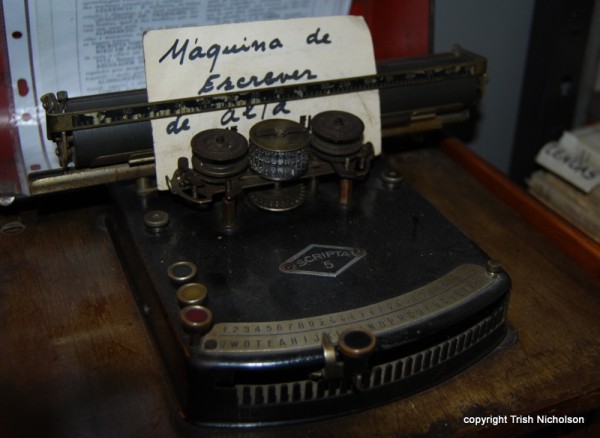 And then what I think might be older, a MIGNON, manufactured by AEG Deutsche, Berlin, with a long needle pointer and an amazing contraption of levers that activate a cylindrical typeface. I can’t think this would be quicker than writing, but it may have been essential for those with an indecipherable hand. I’ll leave Rob to Google them. 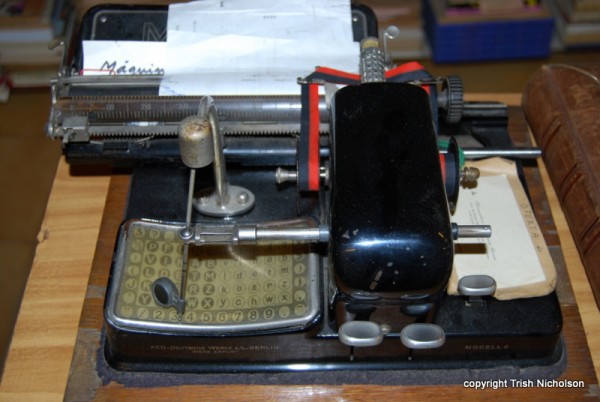 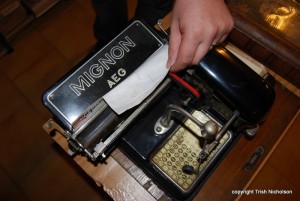 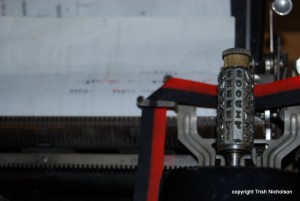 The second bookshop was not hard to find. It is the famous Livraria Lello, at the top of Rua das Carmelitas, with its distinctive neo-gothic frontage. 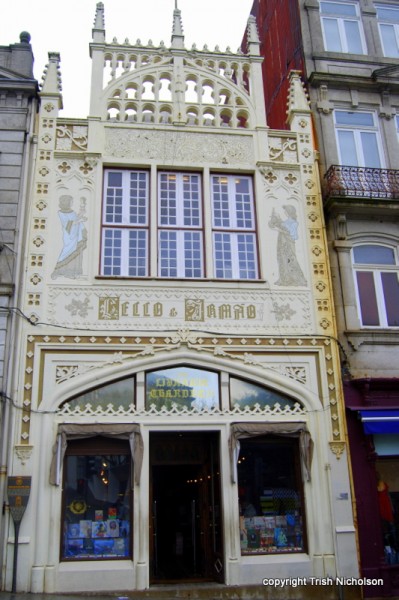 You can read for yourself the plaque on the wall outside. 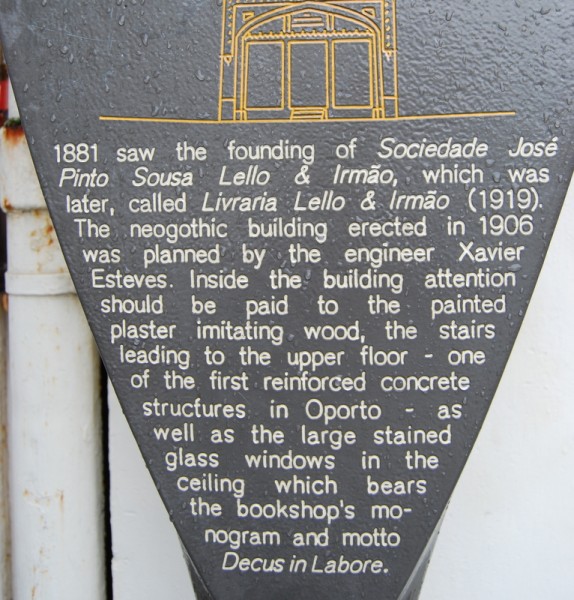 Unfortunately, though understandably, it is forbidden to take photographs inside the shop, and its staff are vigilant. However, they do sell posters, cards and prints of the interior, so to give you an idea of the atmosphere, especially that amazing staircase, I’ve taken a shot of the two prints I bought at Lello’s, both from original photographs by Prólogo Lioreiros S.A. I hope this is not infringing any copyright (it seems more like free advertising to me). 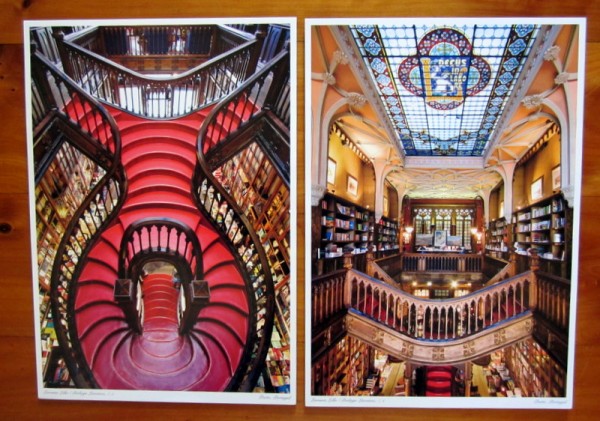 To stand and gaze at two storeys of book-lined walls glowing in light flooding down from the ornate ‘glass ceiling’ is a wondrous experience. Upstairs, in a small seating area at the front of the gallery, coffee, or char camomile (camomile tea), are available while customers chat or read, but it would take days to appreciate the contents of those shelves. The third bookshop I promised to tell you about is on the other side of the city, occupying a large site on the corner of Rua de Santa Caterina and Rua de Passos Manuel, not far from the Café Majestic, and it is called ‘fnac’. 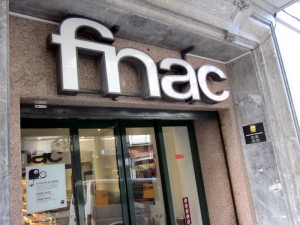 Photography is not allowed inside this store, either, but what is remarkable about it is not the decor but the stock. Apart from an impressive array of new books in several languages and all genres, other departments offer the latest technology and accessories in mobile phones, cameras, e-readers, tablets, and gadgets I’ve never heard of. Row upon row of these shiny techie toys are plugged in for customers to play with – and to buy.

On other floors are music, CD and video departments – everything related to culture with a small ‘c’ and a global reach, but especially the music of Portugal.

As I write, Amalia Rodrigues – the doyen of traditional fado singers – pours out from a CD the resonant, heartbreaking tones of this haunting Portuguese music. There is a cafe here, too – The Forum – offering a range of drinks and delicious cakes. But there are delicious cakes all over the city – leave your diet behind.

If you enjoy reading about travel, you would love  Journey in Bhutan: Himalayan trek in the Kingdom of the Thunder Dragon,  an ebook travelogue, and Inside the Crocodile: the Papua New Guinea Journals. There are backpacks rather than handbags, but you won’t have to carry them!

2 thoughts on “3 Special Bookshops in Porto”