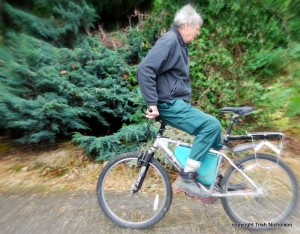 An octogenarian riding a bicycle backwards is not the only unexpected gem in the Highland strath I stayed in recently. The real hidden treasure is the parkland golf course he and his family created on their farm beside the River Glass almost twenty years ago. This visit was pure nostalgia for me. I used to live in Strath Glass, scrambling through heather-fretted hills on hazy mornings, packing wilful fleeces into bales in the shearing shed, and carrying a bottle of ‘the precious liquid’ on a sleigh through the snow to each neighbour at Hogmanay, creating memories blearily magnified three mornings later – we held a full celebration of the New Year in those days. 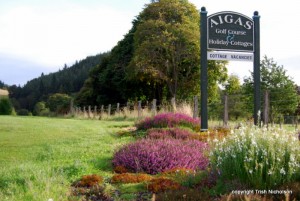 Among those old friends are Peter and Jessie Masheter, farmers at Aigas Main for over fifty years, whose Aigas Golf Course has been a family affair since its first inspiration as an antidote to declining fortunes in hill farming. Son, daughters and daughter-in-law all lent a hand with turfing and landscaping, and are still part of the team that runs and maintains it all, with the occasional addition of grandchildren. The young are an important element; among members of the local golf club based here, 130 are juniors, some barely the height of a putter. 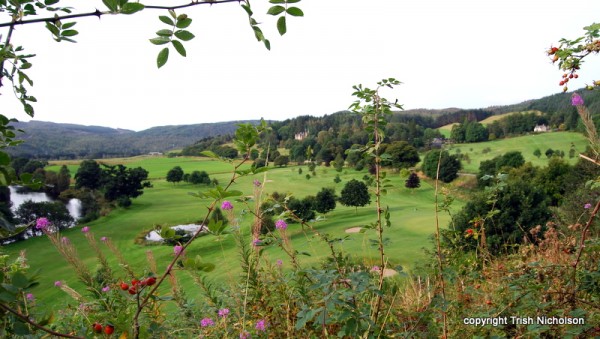 Lingering in the club house coffee shop, I gazed over a beautifully tranquil site nestling between the sparkling salmon run of the River Glass and the dark moody pines of Aigas forest. The rolling contours of this nine-hole course appear deceptively easy; in fact it was designed to provide a challenging game by the Scotsman, Bill Mitchell, who had recently planned the championship course at Kitzbühel in Austria. Par for the course at Aigas is 63 for 18 holes, going round twice as most keen golfers do. The one that will catch you out, though, is the 6th hole – not named ‘The Gorge’ for nothing – where you drive across an 18ft deep pool in an elbow of the river. Peter recently persuaded a member of the family to dive to the bottom – he retrieved 1,400 golf balls! 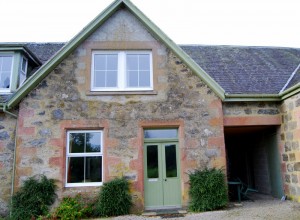 Years before they started to lay the course, Jessie already offered holiday accommodation, having discreetly converted a courtyard of traditional, pink sandstone steadings – stables, dairy and coach house – into cottages, and furnished them to her own high standards. The combination has proved extremely attractive to golfers from all over the world, with the added appeal of a further 25 courses within a 40 mile radius. One Englishman has been staying every summer for ten years. 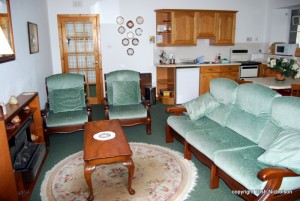 Strath Glass feels remote, if you tread gently along its streams and forest trails you may see red squirrel, pine marten, Osprey, or otters, and you’ll certainly see plenty of deer, and yet it is only half an hour west of Inverness, the Highland capital which I love dearly (as long as I’m not driving in it) and will tell you about another time. 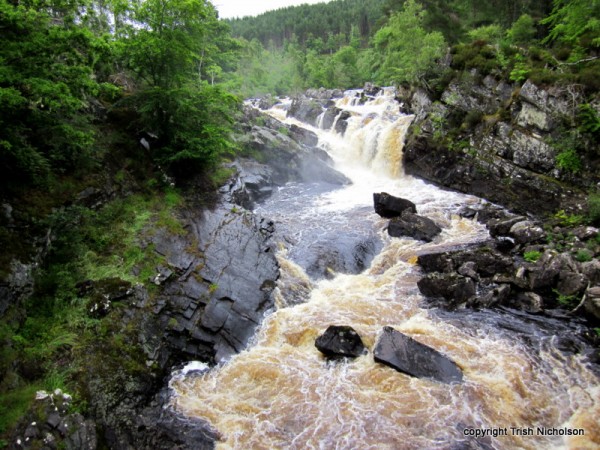 And an aside for those addicted to historical biographies: across the river from Aigas Golf Course, on a private island, is a truly splendid baronial mansion, Eilean Aigas, previously the home of Lord Fraser of Lovat and where his wife at that time, Lady Antonia Fraser, may well have written Mary Queen of Scots (1969). This and her other notable works, including Marie Antoinette and The Wives of Henry Vlll, earned Lady Antonia a Nobel Laureate in Literature in 2005. Eilean Aigas was sold to a Malaysian businessman, King Chong Chai, in 1995, who later sold it to the Canadian Telecom tycoon, Brendon Clouston. It was on the market again for £15 million only six months ago, so you may still be in time to snap it up. But there is another delightful surprise in this peaceful Scottish strath. In the scattered hamlet (or clachan) of Struy, a couple of miles drive under the overhanging tresses of silver birch trees, The Cnoc Hotel (pronounced ‘nock’) offers not only authentic Highland character and hospitality, but an award-winning restaurant. Unfortunately, this is no longer a secret and you are advised to book. As Peter, Jessie and I sank into enormous upholstered armchairs, sipping aperitifs by a crackling fire while waiting to be ushered to our table, we came to a conclusion as to my handicap in golf – complete ineptitude. 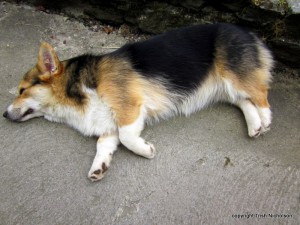 And this is Pip, the sleeping partner in the enterprise. As usual, nobody’s paying me – I must be doing something wrong 🙂 – this is a personal post on a private visit, but if you would like further information about Aigas Golf Course, or The Cnoc Hotel, here are their websites: www.aigas-holidays.co.uk    www.thecnochotel.co.uk

4 thoughts on “A Hidden Gem in the Scottish Highlands”