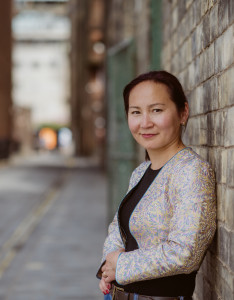 Mongol [mong-gohl], noun, 1. a member of a pastoral people now living chiefly in Mongolia. 2. (offensive) a person affected with Down’s Syndrome. Uuganaa is a Mongol living in Britain, far from the world she grew up in: as a nomadic herder she lived in a yurt, eating marmot meat, distilling vodka from goat’s yoghurt and learning about Comrade Lenin. When her new-born son Billy is diagnosed with Down’s Syndrome, she finds herself facing bigotry and taboo as well as heartbreak.

In this powerful memoir, Uuganaa skilfully interweaves the extraordinary story of her own childhood in Mongolia with the sadly short life of Billy, who becomes a symbol of union and disunion, cultures and complexity, stigma and superstition – and inspires Uuganaa to challenge prejudice. Mongol is the touching story of one woman’s transformation from outsider to fearless champion of love, respect and tolerance. It’s a moving tribute by a remarkable woman to her beloved baby son, testifying to his lasting impact on a sometimes imperfect world.

I connected with Uuganaa (@guuye) a couple of years ago through Twitter, partly because she lived in Scotland where I lived for many years, but also because she is from Mongolia – a tough and beautiful country of resourceful, friendly people where I spent some time in 1995.

Trish: Welcome to the Tree House Uuganaa. When did you cross the world to settle in Scotland, and how did that come about?

Uuganaa: I used to teach English as a Foreign Language in a language school in Ulaanbaatar, the capital city of Mongolia. The school sent me to go on a professional development course in London in 2000. The course was only for four weeks and I met my husband then. In December 2000, I was back to Britain celebrating my first ever Christmas in a British style, pulling crackers and trying turkey for the first time.

Trish: You have two twitter accounts, one in English and one in Mongolian, in what other ways do you live in both cultures?

Uuganaa:I write blogs in both languages and write in both on Facebook too. I try to speak Mongolian with my children although they tend to respond in English. They understand me and that’s the important thing. I feel as if we have a secret with them speaking in Mongolian. I can tell my little boy to clean his nose or something in Mongolian without embarrassing him in front of his friends [“smiles”]. I cook Mongolian buuz and lamb noodle soup occasionally.

Trish: I’ve eaten lamb noodle soup and loved it, but what is ‘buuz’?

Uuganaa: Buuz are dumplings made of beef, lamb, goat meat or horse meat. They are a traditional dish which is served mostly for celebrations. They’re also my family’s favourite. My mother is very good at making them. I occasionally make them now in Scotland.

Trish: What family do you have in Mongolia, and how do you keep up with them?

Uuganaa: My parents and my sister, brother and most of my relatives live there. Nowadays, it’s much easier because of Skype, mobiles and other messaging systems. Technology definitely makes the distance less. My parents chat from their ger and I can see the inside of my childhood home. It’s lovely to see the hand-painted wooden furniture and the stove in the middle. The small details like the wok they are using make it so good. My parents are retired but they seem to find other projects related to their professions. My mum is training trainers and my dad is working on veterinary projects. They still carry their water from the nearby spring and use the wood-fired stove for cooking.

Trish: Let’s pause a moment and show everyone what a traditional ger looks like: 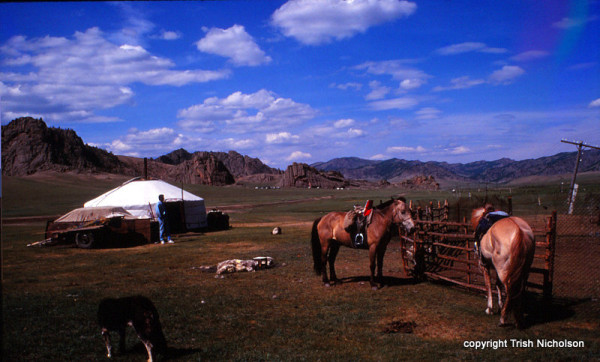 Trish: I enjoyed staying in a ger – a convenient living space and they stay wonderfully warm. When did you last visit your Mongolian family?

Uuganaa:   I visited Mongolia in 2012 for about 5 weeks, 3 years after my last visit. It was good to be back but a lot had changed. There were many new roads, new buildings and the culture had changed too. It’s funny because I behave and do things the way I did many years ago and realise things have moved on. I saw cousins I hadn’t seen for 20 years and had to try to guess their names. It’s always great to see my friends in Mongolia. One of the highlights from that visit was meeting up in Ulaanbaatar with my schoolmates from Sant, a small village in western Mongolia. They took me to a nightclub where they played songs which reminded us of our teenage years. It was fantastic dancing to Stumblin In by Smokie and that memory still makes me smile.

Trish: It’s 17 years since I was in Ulaanbaatar, taxis did not exist then, you simply flagged down a passing car and if the driver was willing, he took you where you wanted to go. There was a generally agreed rate for his petrol. I expect that is different now?

Uuganaa: There are taxis, but you are right, you can still flag down a car and they can take you. The traffic is so much busier now. In Ulaanbaatar, they sometimes have a temporary system that certain cars are not allowed to be on the road on certain days depending on the last number of their licence plates to try and keep the traffic in control. A lot of shopping centres have opened recently and many of my friends work for the new mining companies as they speak both English and Mongolian.

Trish: How did you become aware that ‘Mongol’, the name of your ethnic group, is misused in the West to refer to Down’s Syndrome?

Uuganaa: In my teens, when I started learning English I saw it in a dictionary. I was startled by it, but I didn’t know the background history then.I experienced and learnt the history after Billy’s diagnosis.

Trish: How aware are people in Mongolia that their name is still misused here.

Uuganaa: Most people are not aware of this misuse. Of course, everyone is a Mongol in Mongolia and they are very proud of their roots. When I visited in 2012, I spoke on the national news and was interviewed on one of the TV morning shows. For some people, that was the first time they heard about it. On the other hand, when Mongolians travel abroad they come across this term. Many Mongolians have started telling me what had happened to them since hearing about my campaign. I’ve heard from Mongolians in France, UK, Netherlands, South Africa and the USA.

Trish: How do you tackle this problem in your book? Is that the main reason you wrote it?

Uuganaa: My book is a memoir, so I take the reader on a journey and show what happened and how it happened. There is no ‘educational’ lecture or blame involved. It’s simply a human story.

No, it’s not the main reason I wrote it. I wrote the book in memory of our son Billy and for my other kids to one day know their background history especially because they are growing up in Scotland.  They don’t really know what my childhood was like and how I came to Britain.

Trish: In what other ways do you campaign?

Uuganaa: I use social media because it’s immediate. I also blog using stories and I’m working with local Down’s Syndrome associations to reach medical workers, teachers and the general public.

Trish: Do you think the situation is improving?

Uuganaa: It’s a complicated concept with many angles, meanings and spread around the world. I think it depends on the country, region and the culture. For example, in North America it seems almost non-existent whereas in Lebanon they have been campaigning for a year to stop using the word mongol and added the word to their official blacklist of insults. In UK, I’m sad to say that it’s in fashion amongst some young people. The latest use is in skateboarding language. ‘Push mongo’ means pushing the skateboard with their wrong foot. 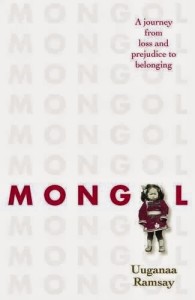 Trish:  The publication of Mongol can only help. I’m looking forward to reading it and wish you every success. It deserves to do well after winning the Janetta Bowie Chalice for a Non-fiction book award from the Scottish Association of Writers’ Conference in 2012. And I noticed that your publisher, Saraband  Books, recently won the Saltire Society award for the Scottish publisher of the year. This sounds a winning combination.

Uuganaa: Saraband are a fantastic publisher and I’ve enjoyed working with them. Thank you for speaking to me Trish. It’s been a pleasure meeting you.

Trish: It’s been a delight to learn more about you Uuganaa, thank you for sharing so much with us. And for those of us living at the other end of the planet, the paperback edition of Mongol can be ordered from The Book Depository freight free.

UPDATE: This interview took place shortly before Mongol was released in paperback in January 2014. It has since become a bestseller – Congratulations, Uuganaa!