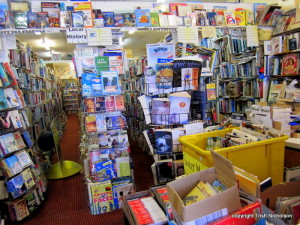 If I know a book’s details I can order it, or I can search a topic to see what is available, but that’s all pretty mundane. What I enjoy about browsing in bookshops is the serendipity: you never know what you might find in your hand. The ease of online purchasing and closure of many bookshops is denying us this pleasure.

But the greatest treat is to rummage among second-hand books, especially where books rise in pillars out of the floor like stalagmites, teeter off dusty shelves, and mound on every available surfaces so that you have to search hard for the gnome in the dented felt hat who might be persuaded to part with a few specimens – when he’s finished what he is reading. 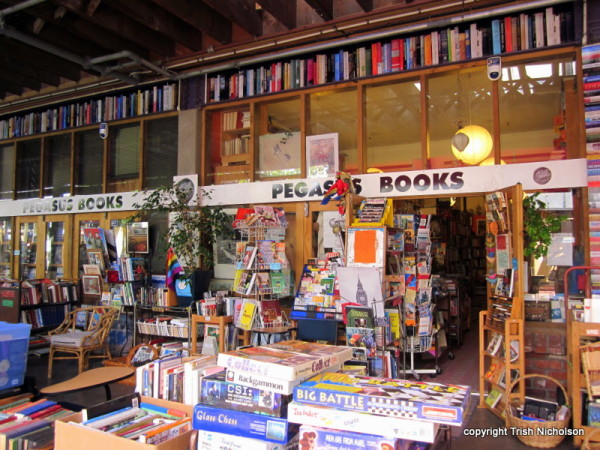 The principal mission on my recent trip to Wellington was to find books of folktales, myths and obscure 19th century literature, but of course, all sorts of other titles insisted on coming home with me and I never could resist the sweet seduction of a book. Around Cuba Street, in the city centre, the main honey-pots – Arty Bees, Quilters, Pegasus, and Finders – occupied most of my time for a week.

I came away with a haul of over fifty volumes which had to be couriered home in boxes, but I’ll mention here only four from this treasure trove.

Anton Chekhov: I already have his short stories and collected correspondence – what I found was an unexpected travelogue. Chekhov’s letters are revealing about his early struggles as a writer and an impecunious doctor, but by the time he was thirty, he was financially successful in both spheres. In July 1890, he embarked on an extended trip; not on a Grand Tour of Europe, or even to a Black Sea resort, but to the dreaded penal colony on the island of Sakhalin, lying off the east coast of Russia and separated from Japan by the narrow La Perouse Strait.

In her introduction to The Island: A Journey to Sakhalin, poet Irina Ratushinskaya explains this seemingly odd choice of destination as both natural to the compassionate nature of Chekhov’s character, and befitting a Russian writer. ‘Russian literature has always focused on questions of conscience […] A writer’s most important task is, after all, to make the human soul perceive the dividing line between good and evil, to voice unequivocally that which nobody had been able or dared to voice before.’

The first half of The Island is meticulously researched reportage on conditions in the labour camp, the prisoners, and those who control them, even down to measuring the inmates’ diets, and he pays much attention to the plight of women and children with insight and sensitivity unusual for the times. Later in the book he shares his views and feelings, but the fascination for me is that, throughout, his ‘characters’, descriptions and images are those of the consummate storyteller he was. I’m looking forward to a more thorough read.

[Anton Chekhov, The Island: A Journey in Sakhalin, Century 1987].

Voltaire: a slim volume of Voltaire’s rambling, amusing observations on life assembled into an A–Z collection would not be left behind. Naturally, there’s an entry on ‘books’: ‘Remember that the whole world, save only the savage parts, is under the sway of books.’ He refers in particular to the books of Confucius, the Vedas and the Koran, ‘If you get into a lawsuit or a criminal trial, your property, your honour, and perhaps your life depend on the interpretation of books you have never read.’

But the authors’ dilemma he describes seems strangely contemporary: ‘If you publish a book, a parish curate accuses you of heresy, a college sophomore denounces you, an illiterate condemns you, the public derides you, your publisher renounces you, and your wine dealer cuts off your credit. I always add to my prayers, “Deliver me, O Lord, from the itch of bookmaking.”’

Voltaire is unsparing in his own criticism. On ‘ignorance’ he begins: ‘Some there are who are so ashamed of all they do not know that they strive to disguise themselves either as wits or philosophers.’ (Himself excluded, we assume).

Edward F. Turner: a 19th century author I had not come across before, and for me, the special interest of this collection of 22 short tales is that they were written specifically for reading aloud at a time when not everyone was literate, and reading to others in the drawing room or elsewhere was a natural part of life.

The style of the stories and some of the characters reminds me a little of H. G. Wells’ Mr. Polly. To give you a flavour, a couple of extracts from the first story, Mr. Piper’s Mittens: ‘The thermometer was falling fast, and so were the foot-passengers, for the pavement was covered with a coagulated mixture of frozen mud and snow as hard as iron and slippery as glass.’

And referring to Mr Piper’s daughter: ‘She had married secretly and very imprudently, a young gentleman with light-blue eyes and little fluffy whiskers, and whose means were even smaller than his whiskers.’ I anticipate a great deal of gentle fun, but what I want to do with these stories, is to see if I can identify what features make them more appropriate for reciting aloud rather than for private reading.

Robert Louis Stevenson: better known to me, and perhaps to most modern readers, for his travel writing and novels, Stevenson was acclaimed in his day as an essayist. I stumbled upon a collection of his literary criticisms which had been previously published in monthly journals – New Quarterly, Macmillan’s, and especially in the Cornhill Magazine – and which he published in 1882 as a complete volume intended for ‘the man in the street’.

In Familiar Studies, Stevenson examines various aspects of nine famous writers from different periods and places, including Victor Hugo, Robert Burns, Henry David Thoreau, François Villon, and John Knox (re his relations to women). “For these were all men whom,” he declares in his preface, “for one reason or another, I loved; or when I did not love the men, my love was the greater to their books.” And yet he has doubts about the way he treated them, “when I came to write of them, my tone was sometimes hardly courteous and seldom wholly just.”

He is certainly incisive as he opens the chapter on Thoreau: “Thoreau’s thin, penetrating, big-nosed face, even a bad woodcut, conveys some hint of the limitations of his mind and character. With his almost acid sharpness of insight, with almost animal dexterity in act, there went none of the large, unconscious gentility of the world’s heroes […] he had no waste lands nor kitchen-midden in his nature, but was all improved and sharpened to a point.”

[Robert Louis Stevenson, Familiar Studies of Men and Books, illustrated by Nick, Collins’ Clear-Type Press; my small, faded red-leather edition is undated, but as the Introduction was clearly written after the author’s death, it must be post 1894].

And in Arty Bees Books, I saw the best advice for aspiring writers – 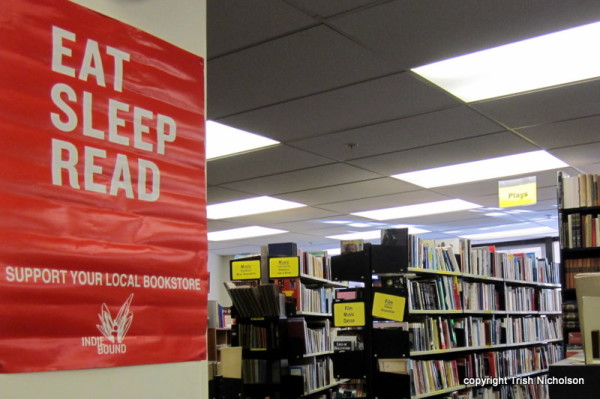 If you love stories, I think you would enjoy A Biography of Story, A Brief History of Humanity, more details here

And if you are interested in writing, you will find lots of tips from planning, researching, writing, editing and publishing, to marketing a book in, Writing Your Nonfiction Book: the complete guide to becoming an author.