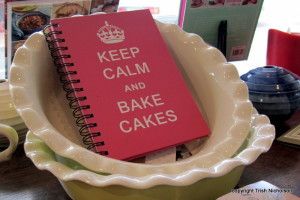 A pragmatic traveller rather than a gourmet ‘to-go’, I rarely write about eating. But in the first of a series about my recent sojourn in Wellington, I decided to make an exception and start with food, so that you had sustenance for the later posts and because, as everyone knows, the way to the heart is through the stomach.

Wandering idly through the small seaside town of Petone on the outskirts of Wellington, and lead by my love of storytelling, I came upon the most delicious of stories: 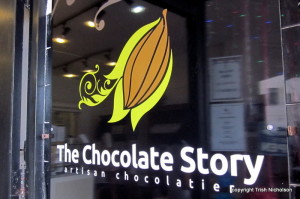 Brett Nicholls opened The Chocolate Story almost two years ago – wisely just in time for Easter – and has seduced local residents and visitors with the results of his French-style chocolatier skills ever since. “All are from natural products without preservatives,” he told me. “Some ingredients like almonds and hazelnuts change during the year because we use only what are in season.” 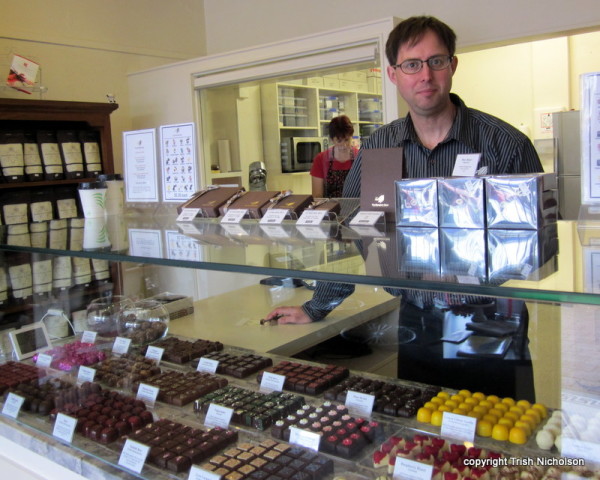 Obeying the harsh, unbending disciplines of journalism, I was obliged to sample the chocolates by way of research. And then a few more were necessary – to use as photographic models before ‘disposing’ of them in a responsible manner.

While still under the influence of chocolate, and therefore vulnerable, another French aroma drew me, quite unconsciously, into Crêpes a Go-Go, to watch Thomas Tondu, from Marseille, creating amazing organic confections on his hot-plate. 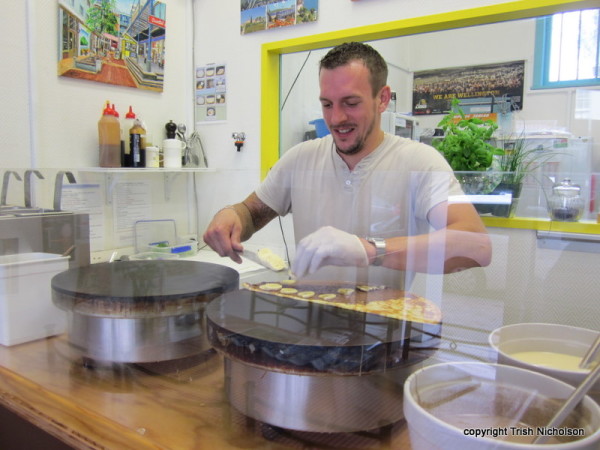 Somehow, I found myself eating a ‘Canadian’ – drenched in maple syrup and encrusted with flaked almonds.

Inexplicably, I was there again the next day and met Thomas’s assistant, Julien – another Frenchman – succumbing to a crêpe enfolding fresh raspberries and whipped cream in addition to the maple syrup and almonds. 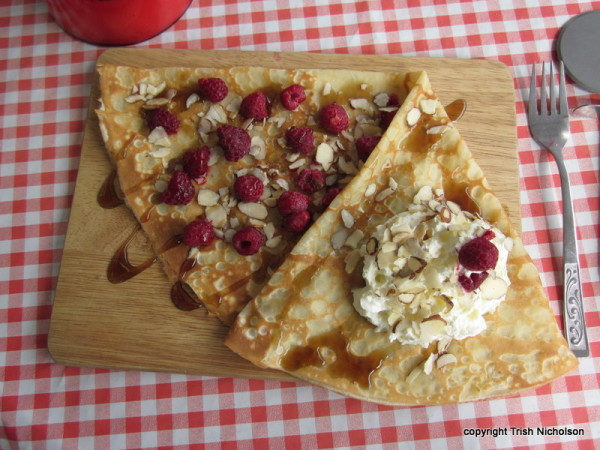 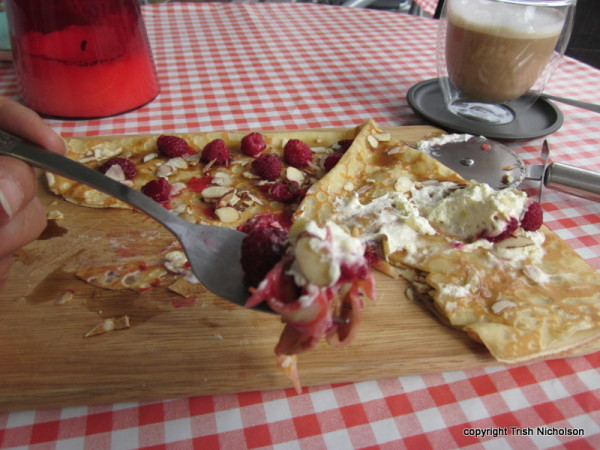 Probably just as well I was leaving the following morning.

A little further down Jackson Street – the artery through the centre of Petone – is a shop proudly baring the name, British Goods, that sells marmite, humbugs, Daddy’s Sauce and all the goodies that folk in the UK take for granted, and for which ex-pats in New Zealand (and Kiwis who have tasted them on their travels) regularly pine. 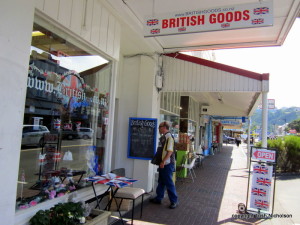 I asked store owner – suitably named Les Brittain – which lines were the most popular. Apparently, he sells an awful lot of that flour with the little man in the bowler hat on the bag. “People baking from English recipes find that the local flour doesn’t work so well for them.” Not something that would have occurred to me as a devoted non-baker.

British nostalgia is rife here, with street names like Nelson, Brittania, Victoria, Kensington, Queen, and Richmond, but Petone’s taste buds are cosmopolitan. Restaurants and cafes offer fair from Vietnam, India, Thailand, Turkey, China, the USA and Italy – including a pizzeria called Hell, selling what they describe as ‘Damned Good Pizza’. 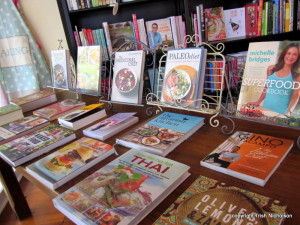 While standing, gazing, on the pavement, I spied a bookshop and without a second’s thought, scuttled across the road – narrowly missing a van coming from one direction and a bus from the other – but it turned out to be a bookshop such as I’d never seen before. Every shelf and display space in Book Feast is devoted entirely to … food. I swear there is a not a dish in the entire world that is not immortalised in print somewhere on a shelf in this store. 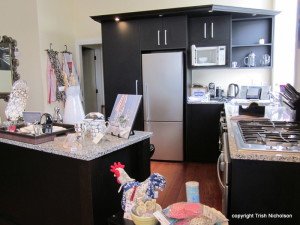 One corner is equipped as a kitchen where cookery authors can demonstrate their recipes and, presumably, sell their books: a unique kind of ‘signing’.

If you write about food, I suggest you chat-up your local cafe or restaurant for a demonstration date and take a pile of your books with you.

In Wellington city centre, hot on the scent of second-hand books rather than food, my meals were quick and prosaic, but I ate them in delightful venues. A chicken and rosemary pie, at Smith the Grocer in the Old Bank Arcade, along Lambton Quay, was memorable for its lightness, flavour and generosity of chicken. 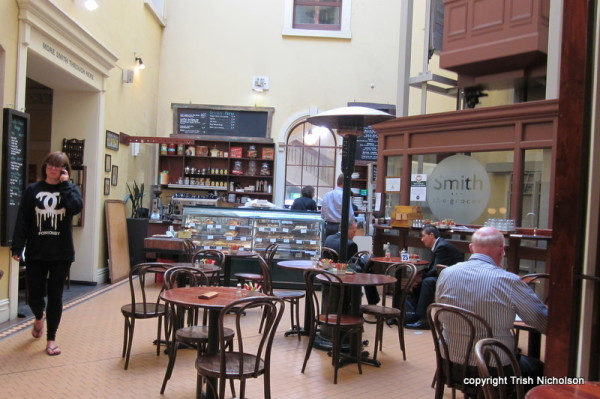 But in my favourite part of the city – the extensive pedestrian area of Cuba Street – I found J. J. Murphy’s. You guessed correctly – an Irish pub. They were barely open when I hustled up to the bar one morning in urgent need of coffee. 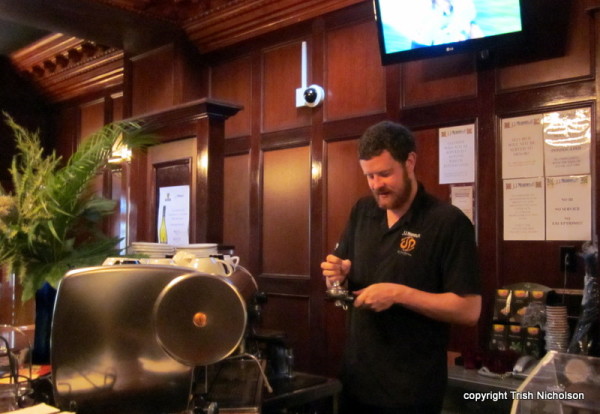 While the coffee brewed, the barman, Gavin – a Scotsman working his way round the world – showed me the interior of carved wooden cornices, an elegantly turned staircase, and decorative leaded windows providing additional discretion to intimate booths. 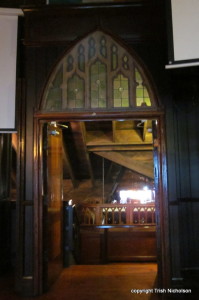 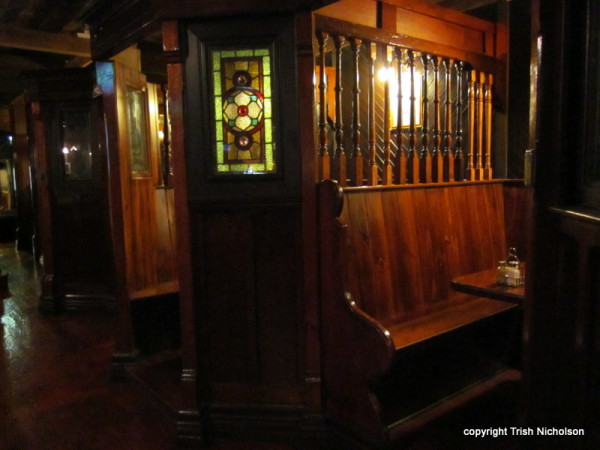 But this pub is Irish: all is not what it seems.

When John J. Murphy bought the building twelve years ago, it was a stark, furniture warehouse. Once these chattels had been removed, not a splinter of wood remained. All of it has been recycled, brought in from – Gavin didn’t know where – but a church, by the look of it. Rather a delicious idea. 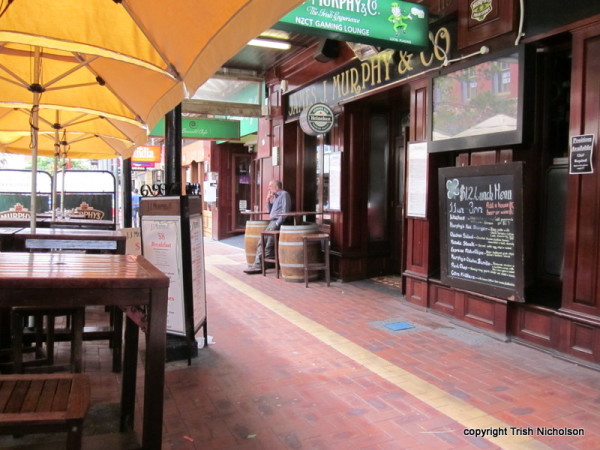 And not the only tasty aspect of this pub: I returned regularly for egg and bacon breakfasts at $5, and chicken salad lunches for $12 – every other dollar being carefully hoarded to buy books (see next week’s blog post).

In Petone, I stayed at the Foreshore Motor Lodge – quiet, spotlessly clean, fresh fluffy towels daily – and as the Petone Beach Cafe is located opposite, as it says, right on the beach (it’s an old boathouse), I decided to eat there on my last night. Idiotically, (though this is not the place to vent my wrath on town planners), a dual carriageway of fast-moving city traffic separates the town from the beach and it’s walkway. Since there is neither pedestrian crossing nor overpass, I felt quite fortunate to reach the other side and be welcomed by Rene Hunia, business partner in the cafe.

I ordered fish and salad (skipping wine in preparation for re-crossing the Rubicon afterwards), and settled on the balcony, warmed by the evening sun, watching more energetic souls trudge across to the sea with their racing skiffs balanced on their shoulders. 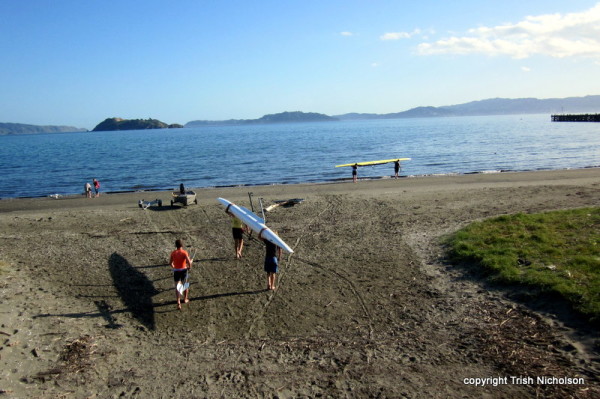 A few minutes later, Rene re-appeared: “I’m just popping down the road to Jackson’s the fish merchant to get your fish.” In due course I was served the most fresh and flavoursome piece of gurnard I ever tasted. 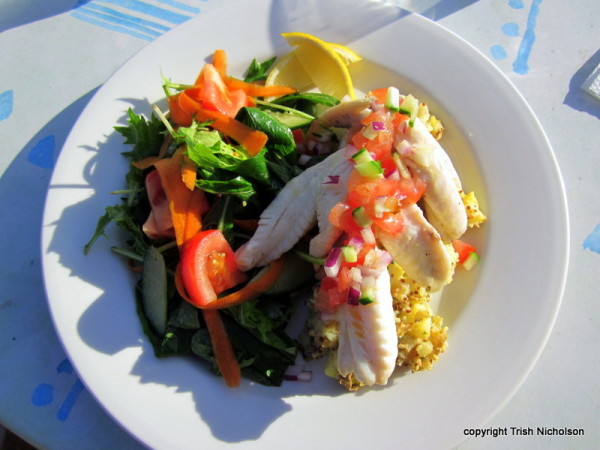 Not without a pinch of regret (especially where the chocolates are concerned), I confirm that discounts, extra portions and free samples were neither offered nor asked for – my views here are entirely independent of sticky inducements. 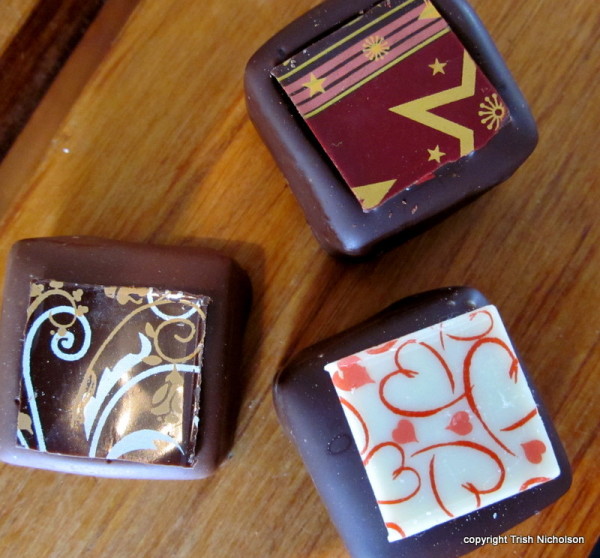