Traditionally, the string was also hand-made, from strips of leaves or grasses dried and twisted into strong fibres. Commonly retained in its natural ‘biscuit’ shade, or dyed in a variety of colours, the fabric of the bilum is constructed using a looping technique without knots.

Bilum making is both a practical and an artistic skill of women, and nowadays, crochet is sometimes used instead of looping, and bought wool or other coloured yarns are frequently employed with individual touches such as beads or fur introduced into the fabric. While living in Papua New Guinea, I could identify my own everyday bilum by half a dozen tiny white beads threaded into it. 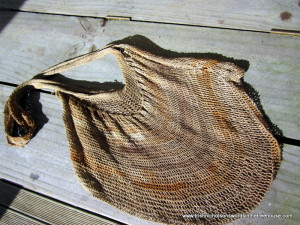 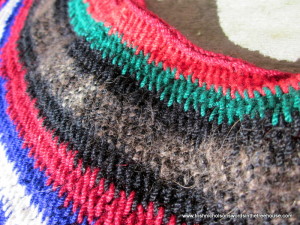 A bilum from the Highlands made with wool and fur from the cuscus (a small marsupial native animal). 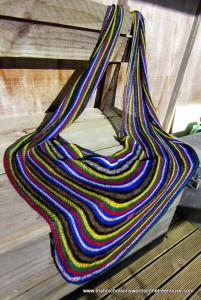 Another Highland bilum made from wool and cuscus fur. 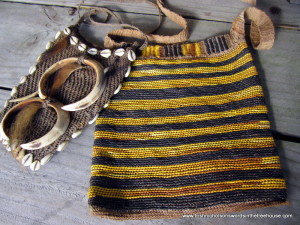 Bilums from Wamena in West Papua, one decorated with yellow orchid fibres, the other with pig tusks, shells and tufts of cuscus fur.

In a country where barter and gift exchange are still important, bilums make exceptional gifts: this unique double one was made especially for me by my friend, Jem. She lived in Telefomin, a mountainous area in West Sepik Province, and as was usual in that area, she made it in the natural shade of the bleached fibres. 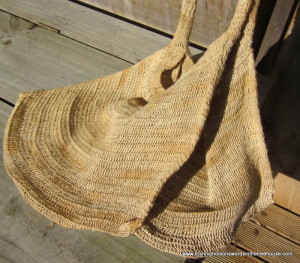 Commemorative bilums were made especially for the 15th Pacific Games hosted this year in Port Moresby, the Papua New Guinea capital. Over centuries, many areas and tribes have developed their own distinctive designs and patterns. 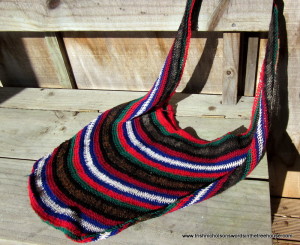 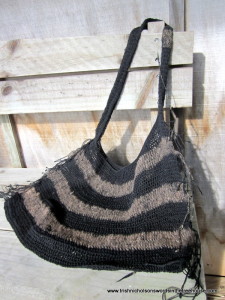 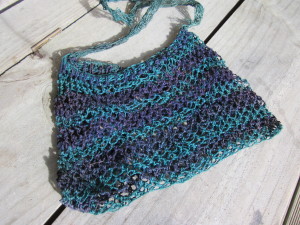 It is customary to make men’s bilums with a longer narrow  strap because they wear them hanging from their shoulders. They are also much smaller than women’s bilums, because in Papua New Guinea men carry only their betel nut, car keys and a few kina for an SP beer. 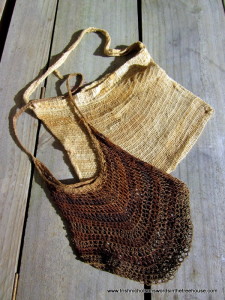 A traditional woman‘s bilum has a short, wide handle that fits around her forehead, so that the bag hangs down her back. Her bilum can expand to ten times its ‘resting’ size when filled with firewood, harvested yams and vegetables, and topped with a baby coddled comfortably in a blanket. 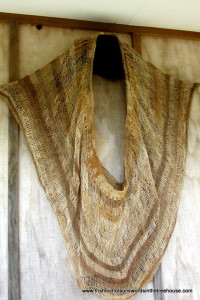 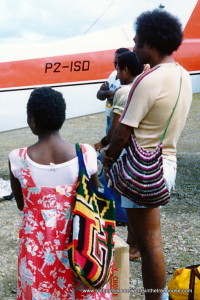 But times are changing and many women now wear colourful bilums as shoulder bags and fashion statements.

And not only bags. With classic Papua New Guinean creativity, the basic techniques have been adapted to create gorgeously unique fashion wear for men and women, like the ‘Bilumwear’ exhibited in London in 2009 by Cathy Kata.

For more on this remarkable country read the new travel memoir: Inside the Crocodile: The Papua New Guinea Journals – reviewed here in The Australian, and on Goodreads.

If you are in the UK, get a discount for the print edition direct from Troubador Publishing.

From anywhere else on the planet, there is nearly always a discount at The Book Depository.

Or go to your favourite digital supplier for the eBook.

To stay in tune and read some of Papua New Guinea’s own talented writers, follow the wonderful blog PNG Attitude run by Keith Jackson, on twitter @PNGAttitude

Not sure where Papua New Guinea is? It’s part of the ‘dragon’ that sits above Australia. 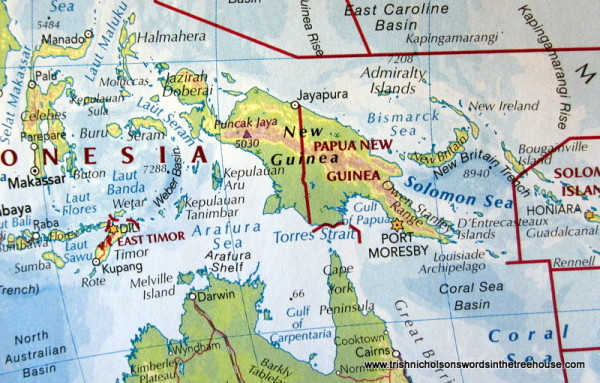 Is Your Bilum Bulging?
Tagged on: bilums    Inside the Crocodile    papua new guinea

2 thoughts on “Is Your Bilum Bulging?”