Papua New Guinea has moths as big as your face. 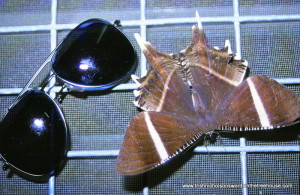 And some colourful butterflies,

Not so shy cockatoos

And other ‘creepies’, of which this is a particularly small one – they can come as big as dinner plates… 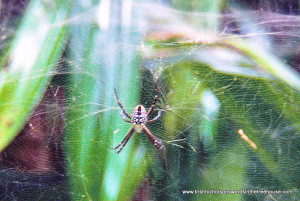 But insect life in Papua New Guinea is not only outside:

“Going to bed late and tired in the dark one night, putting my hand on the bed cover to pull it back, it seemed to move under my fingers.

When I switched on the light, millions of egg-carrying ants were scurrying around in a mass covering the entire bed – it had turned into a slab of shiny, solid ebony. A satellite city had formed under the pillow and they were still marching up the bed legs; a heap of sawdust in the corner near the window showed where they had chewed their way in. Once I realised this was not an illusion, I sprayed the whole thing and shut the door on them for half an hour. It seemed a pity; they had come so far and worked so hard, but what else could I do? Later, wanting to dispose of the bodies outside, I grasped the corners of the laplap I used as a bedspread and found it was almost too heavy to lift.” [extract from Inside the Crocodile]

At least in daylight you can see which critters are where, and sometimes you feel them before you see them:

“I was near the back of our little crocodile when it suddenly stopped. Mike called back for me to light a cigarette and pass it to him. I laughed because he didn’t smoke; I was the only one who did, but he showed me the leech on his leg, a small one, about an inch and a half long. It had lodged its head deep under his skin, now the rest of its slug-like body was rapidly darkening and swelling with his blood.

A lighted cigarette applied to the fat end made it wriggle out faster than it went in, but they are tenacious; he flicked it a long way off. The remedy was passed around as the others discovered they also had leeches; their legs were vulnerable in knee-length shorts. I felt quite left out, the only one without a leech, perhaps because I wore long, thick socks. But it might just have been coincidence because Greg found three of the slimy pests, half-way through the seams of his boots – maybe they could smell the blood from his blisters which he said were agony. The cigarette was carefully handed back to me, but I no longer fancied smoking it.” [extract from Inside the Crocodile]

But on the hair-raising bush trek from Okspamin to Kopiago, night overtook us and we had to scramble through dense jungle in the dark:

“The path, such as it was, began to descend steeply into dense forest where fallen trees across our way were constant hazards to be scaled, or slithered over, depending on their girth. Fuelled by a sense of urgency bordering on desperation, because there were no more alternatives, we pushed on in silence. Our silence, not the forest’s – the trees cut out most of what natural light remained and the night life of the jungle was loud around us.

Crickets and frogs screamed from branches. Disturbed birds, or maybe bats, shrilled in protest, flapping noisily over our heads. Our pace slowed while we tried to detect in the gloom whether what looked like a patch of mud was actually a rock, a hole in the ground, or a sudden drop masked by undergrowth. We came to a small clearing, a steep patch of tall, swampy grass and had to stop Ricky fantasising about spending the night there.”

As it grew completely dark, I wore a small head-torch for as long as the batteries would last:

“It felt eerie, seeing only a tiny patch in front of my feet. The ground sloped away so abruptly, the rest was a black void of screeching insects and Ricky crashing through the undergrowth behind me, sometimes bumping into me, or falling in the mud and cursing roundly and loudly. I fell a few times – over tree stumps, or into holes where the path had been washed away – grabbing hold of what I hoped was a branch attached to a tree somewhere in the darkness.”

And when we finally emerged from the forest in moonlight obscured by clouds, we caught only an indistinct glimpse of our next challenge – a ‘swinging’ bridge similar to this vine bridge over the Strickland Gorge we’d crossed earlier in the day –  in daylight: 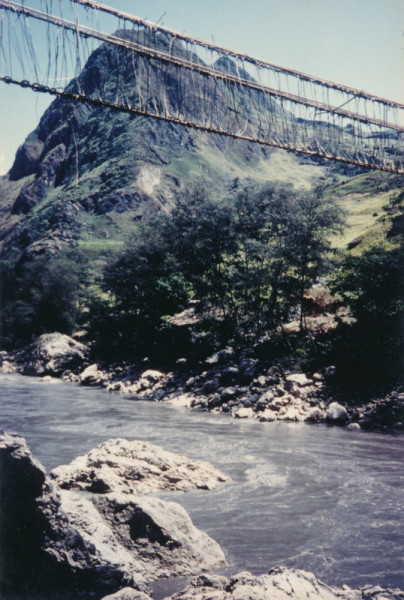 Did we make it across the bridge in the dark?

To know the rest of the story you’ll have to read Inside the Crocodile: The Papua New Guinea Journals  (also available as an eBook from your favourite online store.)

Or you can read a review from Goodreads, and from The Australian