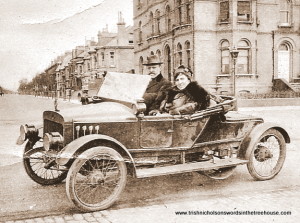 To make family histories enthralling reads we must tell them as stories. Why? Because stories are how we learn and understand. Not just where and when people were born, married, and died, but who they were – their characters and motivation – and what their daily lives were like.

Our ancestors were real people with failings, foibles, likes and dislikes more or less in tune with their times. We need to write them as rounded characters within their own tale.

So, what makes a story?

I can show that best by telling you the story of how I came to have this old photograph of a young Scottish soldier: 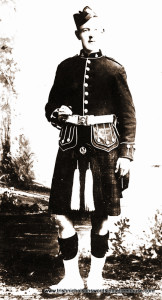 Jock Ingles did not like taking a bath. Bathing had never been part of his lifestyle. He grumbled and cussed as I struggled to help him into the big old enamel tub. I was living in a glen in the Scottish Highlands and helped out in the local old folks’ home (that’s what we called them in the 1970s). This building, a Victorian ‘folly’ – a huge red-sandstone mansion with antique plumbing, back-stairs and side-stairs and turrets in the corners – had been bought by the council for residential care. You can imagine what a nightmare it was to run.

I finally manoeuvred the protesting Jock into the bath and started sponging his back when he began to chuckle, and then to laugh out loud. “What’s up Jock, am I tickling you?”

“Nae, lass, nae. I was thinking, what would Sir Gordon Oswald say if he saw me sitting here in his bath?”

Gordon Oswald, a Glaswegian industrialist, had built the folly. At that time the industrial revolution was in full swing with steel mills and ship-building, and railways rolling out through the countryside. Landed gentry had had their Highland estates and shooting lodgings for generations, now, the newly-wealthy factory owners wanted the same for themselves. When Jock returned from the trenches after the First World War he worked as an estate labourer for Gordon Oswald – his boss in the Big House. Though born in the area, Jock had never even been inside the Big House until he’d ended up a resident there in his early eighties.

Jock became too frail for us to nurse him, so I was telling him that he would go to the hospital at Inverness where they had much prettier nurses, and trying to get a clean pair of pyjamas onto him, when he asked me to open the drawer of his bedside cupboard. “There’s a picture in it,” he said. I opened the draw and took out the photograph you see above.

“Is this handsome young soldier you, Jock?” 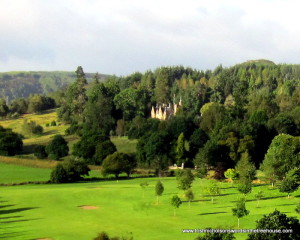 If any of Jock’s relatives had been alive to write it, this little tale would have made a good beginning to a family history, or an opening to a chapter about him.

I could have written: ‘Jock Ingles was born in 1896 in the Scottish Highlands. He survived World War I and returned to work as a labourer on a local estate. When the mansion house was turned into a care home, Jock became a resident there. He died in 1975 at the age of 81.’ Those are the facts, but they do not draw us into a story and we understand very little.

What made this a story?

It is all true – I made nothing up – but I arranged the facts in story-form.

To draw the reader into the story, open with any piece of action which is humorous, dramatic, unusual or mysterious. From that hook you can work backwards or forwards in time as you reveal the rest of the family saga.

What else makes a story?

Focus on your readers – don’t assume they know what it is like to dunk laundry in an old copper; travel everywhere on foot; wait weeks or months for a reply to a letter; work in the dim light of a smoky oil-lamp; take their turn in the weekly bathtub, or realise the determination necessary to gain an education. We have to show them what life for our ancestors was like.

Fill out the story – bring historical periods, locations and people to life by expanding the facts you know with researched detail and imagination. Show the social background – what major events were happening – and describe the atmosphere of places. For example, if you know your forebears took a long sea voyage, read about sea travel at that period so that you can suggest the conditions they experienced and how this would/could have affected them. And you can surmise from the general to suggest the particular: ‘it was customary at that time for … so our great grandparents probably…’ 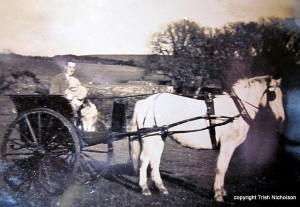 Deepen the ‘characters’ – actions, dress and other people’s memories can all indicate character; motivation is more difficult because we cannot see inside anyone else’s head and heart. Diaries or letters are helpful, although people don’t always write in letters what they really think or feel, so we should be cautious with assumptions, but we can draw on other information to speculate with phrases such as: ‘Perhaps’…‘she might’… or ‘I imagine that’.

Handle uncertainty – often, you will not be sure of the facts, the motives of your forebears, or the truth of family ‘myths’, but you don’t have to exclude the material. Jock had once mentioned a younger brother who did not return with him from the Somme. I suspect the photograph is actually of his brother: people ‘live on’ when they are remembered, and it is possible that Jock wanted me to keep the photograph for his beloved brother’s sake rather than his own. Recognising and discussing uncertainties enhances the authenticity of your story.

Deal positively with conflict – conflict within families is not unusual, nor is it uncommon for other branches of the clan to claim different versions of the same events; even siblings may have disparate memories and attitudes towards the same parent. This is real story-territory. Give a balanced account of contending claims: each person’s memories are valid; recognising this, exploring the ‘why’ and the outcomes of such differences enriches your story and deepens understanding of your family history – it might even be healing.

Family histories, like all stories, need a theme and a structure. You will find notes on these here.

For tips and techniques on the whole process of researching, writing, editing, publishing, and selling your book, see Writing Your Non-fiction Book: the complete guide to becoming an author. (Reviewers say they also found much of value for fiction writers).

2 thoughts on “How to Write Family History as Story”