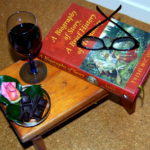 This post is linked from the main post for A Biography of Story, A Brief History of Humanity

Pasted below is the Table of Contents for Story’s ‘biography’. (Unfortunately, I do not have here the beautiful Aldine type that we chose for the book.)

Before we meet Story: facts with imagination

Chapter One: In the beginning were the words

Story is born among our foraging ancestors with whom she shares knowledge for survival and spins our creation stories.

Chapter Two: And the words were inscribed into stone

Demands of trade develop writing systems, allowing ancient tales of Thoth, Gilgamesh, Homer and Valmiki to be written down.

Chapter Three: The hawk, the owl and the elephant

Story recalls the wisdom of the animals as they mingle in the fables of Aesop and Indian storytellers along the Silk Route and over the seas.

Celts migrate across Europe to flourish in the west, and when Christian scribes convert Celtic heroes into saints, Story holds the threads of their myths.

Chapter Five: The fates of champions in long-ships

The sagas of Norsemen raiding and trading from the North and Baltic Seas to the Caspian and to Iceland are gathered up by Snorri Sturluson in the Edda.

Chapter Six: 1001 tales and as many knights

The age of exploration brings Black Death as well as gold, but Chaucer and Boccaccio cheer ordinary folk with saucy stories in the vernacular.

Centuries-old block printing is replaced by Johannes Gutenberg’s printing press, and Wyllyam Caxton translates some of Story’s favourites into English.

Chapter Nine: A clash of two ages amid gargantuan change

Marguerite of Navarre protects humanists and Protestants from persecution, while Rabelais satirises the desire for reform.

Chapter Ten: All the world’s a stage

Story recalls with Dionysus the first drama in ancient rituals, memories which set the stage for Shakespeare as they do also for the Commedia dell ’Arte.

Chapter Eleven: Once upon a time

Chapter Twelve: Tell it how it is

Story recruits Russian, French and American storytellers to reveal stark realities brought by industrialisation and to oppose serfdom and slavery.

Technology shrinks a world dominated by imperialism where Kipling and Conrad call from opposite corners, until world wars change life forever.

New voices from many nations tell their tales in a digital world which promises freedom yet threatens oppression. Story waits for us at this fork in the path.

And here is one of the original pieces of artwork that I commissioned from the talented illustrator, Graeme Neil Reid, and which we chose for the printed endpapers of the hardback edition.

The gorgeous acacia tree – symbol of life, of stories, of ideas, of our diverse human family – is a truly ancient species whose multiple benefits have nurtured humans since our origins. Acacia is native to Africa and Australia where some of the oldest indigenous stories to ensure our survival were told – and they still are, if we choose to listen.

Available in the UK, from your local bookshop; or direct from the publishers here; or from Amazon UK here.

From elsewhere in the world you can order from The Book Depository here with no freight charge.

Table of Contents to Story’s ‘Biography’
Tagged on: A Biography of Story A Brief History of Humanity    story