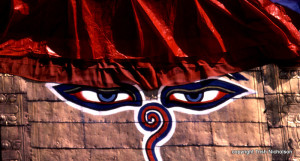 What did travellers of the past bring back from their journeys in distant places?

I happily accept the title, Queen of Clutter. And I have no intention of being anything less. To pick a way through the jumbled rooms of my house is to relive a life of travel with its moments of confusion, euphoria, disaster, and hilarity.

I’m not talking about plastic Buddhas or stuffed camels. But the natural and handcrafted oddities gathered, bartered for, bought or given, which, for me, evoke each person and place with delightful clarity: the deadly blowpipe bartered for with a pair of wellington boots in the Amazon; the sooty, chipped, clay cooking pot exchanged for the skirt I was wearing in Papua New Guinea; and the glorious thangka, traditionally painted wall hanging, so patiently negotiated for in Bhutan.

It was natural, then, that I should take an interest in the ‘souvenirs’ acquired during the twenty-one incredible journeys in the past that feature in Passionate Travellers. Unlike so many of the grand explorers and ‘discoverers’, my passionate travellers were not looters; although, the Abbot Daniel of Kiev was a bit naughty when he visited Jerusalem after the First Crusade.

Having been deeply moved by the Easter rituals in the Church of the Holy Sepulchre, Daniel slipped a “small gift” to the guardian of the inner sanctuary or Aedicule: “The keeper of the keys, seeing my love for the Holy Sepulchre, pushed back the slab that covers the part of the sacred Tomb on which Christ’s head lay, and broke off a morsel of the sacred rock, this he gave me as a blessed memorial, begging me at the time not to say anything about it at Jerusalem.” [The Pilgrimage of the Russian Abbot Daniel in the Holy Land 1106-1107, C. W. Wilson]

Daniel would not have been the only pilgrim seeking such a memorial; a marble cover was placed on top of the original tomb slab some years later to prevent further ‘pious desecration’. (The protective slab remained undisturbed until 2016, when it was lifted for conservation work.)

A series of dramatic events prevented the Mongolian monk, Rabban Sauma, from reaching Jerusalem, but he made the most of his opportunity when he visited Pope Nicholas IV. The elderly monk had been sent by the Ilkhan of Persia to persuade European powers to join the Ilkhan in a further crusade in the Holy Land. On his visits to Constantinople, Paris, and Rome, Rabban Sauma had been impressed with the wealth of religious relics – the head of Matthew, the foot of Philip, the arm of James, and a robe of the Virgin Mary – treasures unknown in his own Nestorian Church, and he was a bit envious.

Before Rabban Sauma’s return to Baghdad, he plucked up courage to ask the Pope for a few sacred relics to take home.  The pontiff was reluctant: if he gave relics to everyone who asked, there would soon be none left. But as Rabban Sauma had travelled so far, he relented, giving him some pieces of Jesus’ and Mary’s clothes, and assorted fragments of saints’ bones.

For some travellers, vanity dictates an ‘I was there’ kind of souvenir. During Michel de Montaigne’s long sojourn in his beloved Rome, he went to considerable lengths to obtain citizenship of the Eternal City in a Bull signed by Pope Gregory XIII, “glorious in seals and gilded letters.” The Renaissance philosopher in Montaigne recognised that his gesture was “full of inanity and foppery”. It gave him immense pleasure nonetheless.

And it should not surprise us that fun-loving Anton Chekhov brought back two little playmates, mongooses, picked up in Asia when he returned by sea from a harrowing three-month study of the prison colony on Siberia’s Sakhalin Island. His pets’ antics livened up the long return sea voyage which bored him.

Sometimes there are regrets and embarrassments. Such as the moment you unpack that unique piece of indigenous craftwork to impress your neighbour, and their knowing smile when they point out a tiny ‘Made in China’ sticker you hadn’t noticed.

After years of penetrating the Gobi desert with a cart load of Christian literature, missionary Mildred Cable decided to buy some souvenirs. It was 1926 and, due for furlough leave, she would travel north-west following the Silk Road, and via Semipalatinsk, to Omsk, there to pick up the Trans-Siberian Railway into Europe. Along the way, in the boisterous market in Urümchi, she bought a woman’s face veil from a Muslim trader. Mildred was more amused than anything else to see the label ‘Made in Manchester’.

For a few travellers, their most significant ‘souvenir’ turns out to be the gifts they give to others. It is possible that ibn Fadlān bought a slave girl for his boss, the Caliph in Baghdad, from the Rūs market when he travelled to the River Volga to meet with the Saqāliba king. But his best gift, to us, still good over a thousand years later, is his risala: the account of his journey and the earliest, fullest first-hand record of the Rūs traders, known in western Europe as the Vikings, and in the Mediterranean as the Varangians.

What is the oddest souvenir you’ve brought back from a trip?

I relate more closely to the times and places past travellers journeyed through by searching for the small intimate details of their experience. And for this series of short blog posts I have chosen specific themes familiar to most travellers. But in Passionate Travellers, I recount complete journeys of the past for you to follow step by step, and discover why these travellers undertook such difficult and dangerous adventures, often risking their lives to achieve their quest.

You can read the background to Passionate Travellers and find out who they are here: