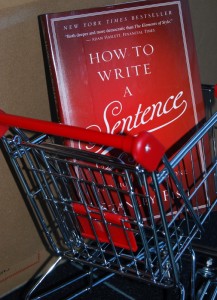 Though a mere 165 pages, this book is bigger than it looks. Its title and its slim figure indicate an innocent simplicity until, layer by layer, Stanley Fish unveils the wealth of delight within its pages. He doesn’t so much parse a sentence as tenderly caress it into yielding its innermost secrets. Clearly, Stanley Fish is besotted with the sentence and listening to him – he writes as if he were sitting in the opposite armchair – it is impossible not to be drawn into the affair.

The seduction begins slowly, so slowly in fact that it caused me some impatience. Aspiring writers are told ‘trust your reader, don’t spell everything out’; I would have liked a little more trust but Fish had a reason for starting from base one – not, mercifully, with grammatical terms and structures – but with “the logical forms that link actor, action, and the object of action in a way that make available simple and complicated predication.”  His purpose in insisting on form first is not, he says, to give it pre-eminence but to demonstrate, as we move through his analysis, that it is the writer’s knowledge of form which gives content the power to release its meaning. His role is that of dance master in the tango between form and content that gives the remainder of the book its rhythm.

The reward for our staying power at the beginning is a romp with some of the greatest writers of prose spanning several centuries: Milton, Donne, Conrad, Swift, Woolf, Hemingway, Agatha Christie, and Ford Madox Ford to name but a few. In their company Fish guides us through substantive, additive, and satirical styles, first sentences – “they lean forward…[they] have content in prospect,” – and last sentences, especially “sentences that would make an impression even on those who did not know the works they bring to a close.”

In his final chapter, Fish identifies closure as an essential quality not only of the sentence but of human experience, the mortality that creates the need to write. One last quote from the dance master: “It is the inevitability and shadow of death that provides life with a narrative arc, and provides moments in that narrative with a meaning; for the meaning of a moment – its distinctiveness – is a function of the place prepared for it by a past and the place waiting for it in a future that has (again, like a sentence) a terminal point.”

I must confess that this eminent American scholar was unknown to me before reading this book and being on a tight budget and risk-averse I borrowed it from the public library, but resisting the urge to participate, to mark and underline, to scribble in the margins, became such a strain I went out and bought my own copy.

How to Write a Sentence, and how to read one, fulfils its promise to both writers and readers; all writers are readers – or should be – but readers who never thought to write a single word will go back to their bookshelves to reread their favourite volumes equipped with new insights. This is not a book you ever entirely finish – whether I’m reading or wrestling sentences onto the page, it will remain where I can lay my hands on it.

How to Write a Sentence (2011) is published by Harper, an imprint of Harper Collins Publishers.

This review first appeared as a guest post on http://pamreader.blogspot.com full of excellent reviews and insights on reading by blogger and Tweeter @pamreader