I don’t have a roof-space; mine is a small single-storey cottage with beams – not even old ones – but my living room is pretty much like anyone else’s can’t-find-a-thing-for-dust-and-boxes attic. 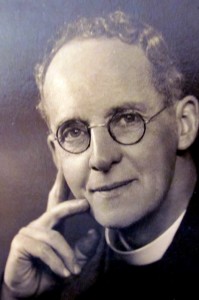 Yesterday, whatever I was searching for in one of these boxes was pushed out of my head when I found a small forgotten treasure: a booklet, A Short Historyof East Stoke, Dorset, by The Rev. Hugh Selwyn Taggart – my gorgeous granddad!

He wrote it while he was Rector of Saint Mary-the-Virgin in East Stoke, England, probably in 1939 as that would have been the centenary of the ‘new’ church building (the original church dating from at least 1306). On the cover is written ‘With the author’s compliments’; it hadn’t been addressed to me, I wasn’t even a twinkle in anyone’s eye then so it must have been sent to me by my aunt at some time in the distant past.

Why he took up the living in Dorset in 1936 , or how long he stayed there, I don’t know; he was a Manxman and, like his father before him, was ‘Parson Taggart’ of St Matthews Church in Douglas for most of his career. It was in the Isle of Man as a child that I knew him. Visiting him was a huge treat. Retired by then and becoming frail, he would beckon me nearer, his eyes shining with smiles, and talk in his soft confiding voice as if I was the only person in the world he could possibly share his thoughts with. And now he’s quietly re-appeared in New Zealand from a box under the bed.

I turned the booklet over to the advertisements on the back: ‘George Dicker, Grocer, Wareham. Telephone: Wareham 11’. That telephone number says so much. Is Dicker’s still there?

The booklet begins: “The name of our Parish is derived from the Saxon word “stoke,” which meant a village. In the reign of William l its over-lord was the Earl of Mortain (or Moreton). Before the Conquest it belonged to a Saxon named Edmer and had a mill worth 50s. This is undoubtedly the Mill which still stands, though it no longer grinds.” 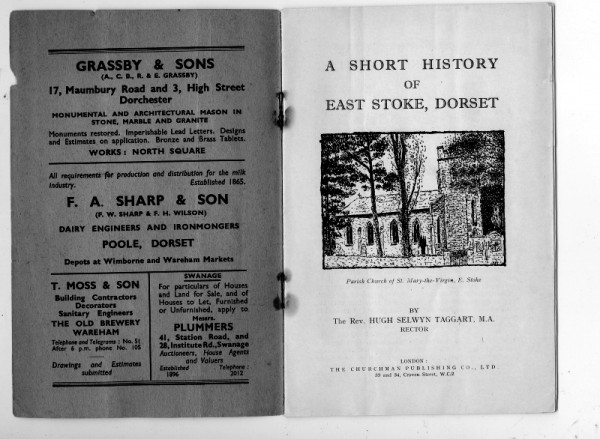 A later section gives a potted history of several ancient ‘big houses’ of the area, including Hethfelton (Hafelton in the Doomsday Book); Stockford and, of course, Woolbridge, famous for its part in Thomas Hardy’s Tess of the d’Urbervilles. Originally belonging to the Abbey of Bindon, Woolbridge came into ownership of the Turberville family in the reign of Elizabeth l. The last Turbervilles were twin sisters who lived all their lives together and died in the same house (in Fulham) in the same year at the age of 77 years. “The portraits of the two Turberville ladies, whose features caused Tess in Hardy’s novel to shudder, are still to be seen on the walls of the first-floor landing.” 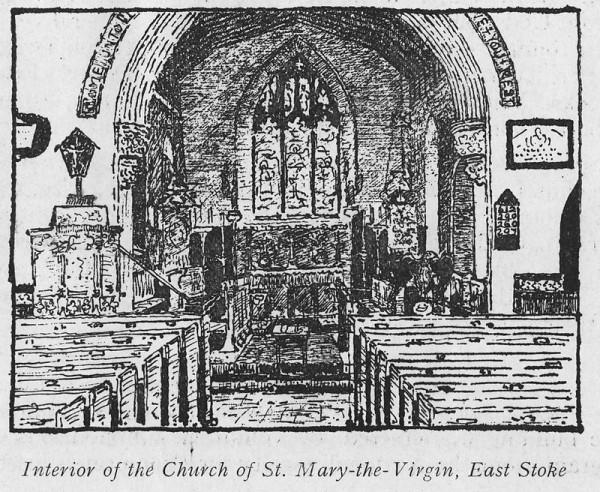 Granddad used his own detailed sketches in describing the ruins of the old church and the ‘new’ building as it was in his time. I can imagine that sitting in one of the pews and sketching his own church gave him particular delight: it was not his usual view from in front of the altar or in the pulpit.

Of special interest to him, though, would have been the Parochial Records: he always took a practical interest in the physical as well as spiritual wellbeing of his flock – to the annoyance of my grandmother it was not unusual for him to give away his clothes or even his dinner if a needy person knocked at the vicarage door. In the early 1800s, in the absence of a welfare state or of union benefit societies, the poor were assisted by officials of the Parish using funds collected by local levy. A few of the many examples in the booklet are given below: 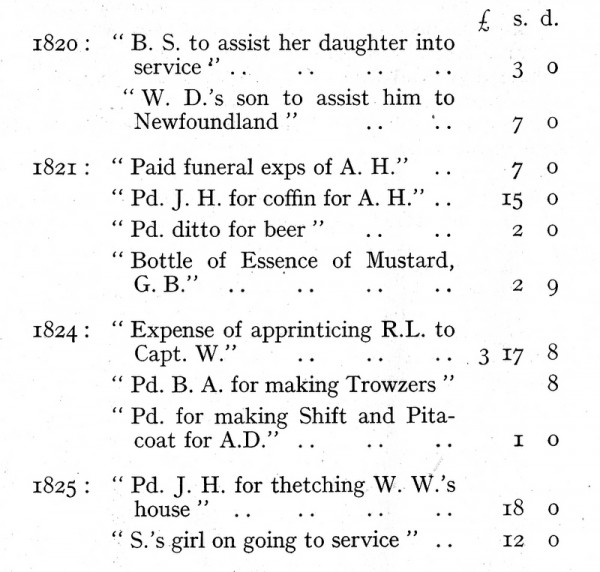 There was another problem in the Parish at this time, too. At a Vestry Meeting on 29th April 1802, it was decided to pay the following bounties for the killing of vermin within the Parish of East Stooke [sic] : 2 shillings a dozen for rat’s heads; 2 pence per dozen for sparrow’s heads, and 4 pence for each and every hedgehog’s head.

(It may be some comfort to know that no payment for hedgehog’s heads is recorded).

As a final extract, here are the lists of Rectors from 1306, and of People’s Wardens which were listed only from 1860. If you are from the area you might know some of these names: one of them might be your granddad or great-granddad. 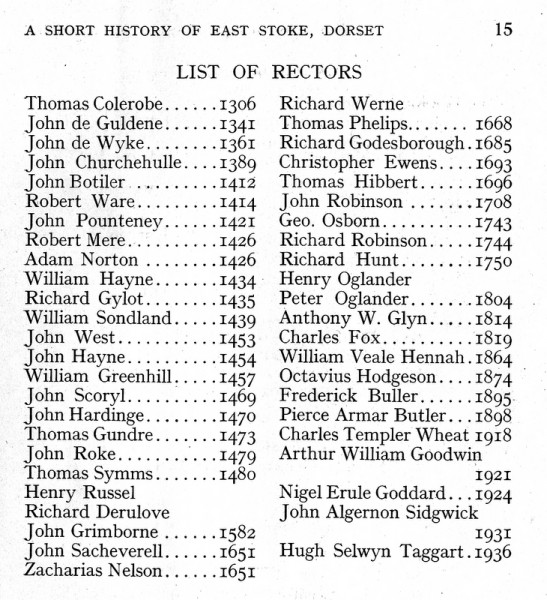 Regrettably I was born too late to hear Granddad preach at St. Matthews in the Isle of Man, but my Aunt (Betty Taggart) – who dedicated her life to teaching infants and looking after both her aging parents – once told me that when Granddad offered sung evensong, the church was so full people stood in the aisles right back into the porch. I suspect most of the ladies of the parish were secretly in love with him.

I was only 9 years old when Granddad died at the age of 92; I couldn’t expect him to wait for me much longer but I feel an unreasonable sadness that I wasn’t born a few years earlier, or Granddad born later.

If you still have grandparents, go and talk with them; if not, try ferreting around in the attic – you never know what treasure you might find.

If you are writing memoir, biography, family or local history, you might find Writing Your Nonfiction Book: the complete guide to becoming an author, useful, because it has sections specific to these genres.

14 thoughts on “History in the Attic”