The Devil’s Music by Jane Rusbridge: A review 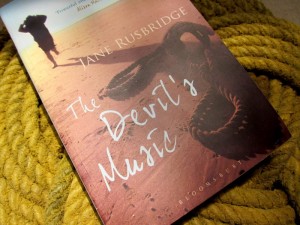 Already there is heated debate about prologues in novels; widely divergent views are staunchly defended on both sides. So what kind of novel starts, not even with a prologue, but with an illustrated glossary of nineteen types of knot?

The answer: one whose author has the confidence to take up an unlikely, though deeply resonant, symbol and thread it through an ingeniously original tale.

The technique of knotting is at least as old as the first hunter’s snare – and as universal. Though the function of each knot is explicit, the symbolism is not always so clear; intricate Celtic knot patterns in the ancient Book of Kells still hold their mystery despite decades of study. Scholars are reluctant to assign specific meaning to individual knots but many would agree on a general interpretation of interlacing – the most characteristic of Celtic designs – as the intertwining of spiritual and physical experiences. And this is the innermost core of The Devil’s Music: the mind’s interpretation of events and the impact of that internal reality on how a life is lived.

Around this core the yarn loops and crosses, binding together the three main narratives of the story: Andy’s childhood, which is woven through the second narrative of his return thirty years later, and that of his mother. In an unusual structure, Andy’s story is narrated in the first person: his mother’s in the second, but this is more than a writer’s device to separate narrative streams; it implies differences in self-perception, and signals development by a sudden switch in the last chapter.

The book jacket describes The Devil’s Music as “a moving novel about love, betrayal and family secrets.” It has all of these, and loss and guilt as well, but the novel takes us deep into the needs and subsequent choices that create them. Fate takes some choices out of our hands but those we make ourselves become the fate of others.

Nine-year-old Andy’s devotion to his baby sister is undaunted by adult diagnosis that she is ‘not all there’. He gives her the nickname, Jelly, and finds his own way of communicating with her and making her giggle. The brief opening scene, set in the late 1950s, shows him minding the baby on the beach while his mother and other younger sister, Susie, buy ice cream. The scene and the often inconsequential but revealing thoughts of a child are minutely and skilfully observed – a deftness that Jane Rusbridge carries right through the novel, anchoring changes in time and location.

Jelly lies on my towel by the pool I’ve dug for her. She was lumpy as a bag of coal in my arms and nearly as heavy; my chin knocked on her head and my bare feet burned on the pebbles. But she was too hot and squashed in her carrycot. She couldn’t stop crying. Further up the shingle bank my mother’s empty deckchair billows red and white stripes.

Honey is circling, nose down. Round and round Jelly and our pool. I see Jelly has rolled onto her stomach. Honey sits down. She barks once; twice. The man digging for lug worms pauses and looks up, a foot on his spade. Goose bumps rise on my arms.

This first chapter reveals the tragic memory that haunts Andy’s childhood and still circumscribes his life when he returns to the beach 30 years later. He has become a drifter, an avoider of relationships and commitments, but at Susie’s suggestion he stays to renovate the family’s old seaside cottage and attempts to face down the past. A past that includes a doting mother dragged down by grief, a father strict to the point of brutality, and his own, often dangerous, identification with Hudini as an emotional escape. But there is Grampy and his rope lore. Grampy, who calls him ‘my treasure’, and teaches him the knowledge of knots that recurs throughout Andy’s story as a means of both self-preservation and self-expression. A final overwhelming loss seals Andy’s future of rootless detachment; a lifestyle caught only in glimpses after he returns to the beach house and is drawn, almost unwittingly, into an intense relationship.

His mother’s narrative enriches the context of Andy’s story, but also has a life of its own as she strains to cope with the loss of a child and to retain her own identity within a repressive marriage. Her story has its own arc which I won’t spoil with further detail. Susie’s life is not uneventful either although we see it only through Andy’s eyes and her interactions with him. Chapter by chapter these individual story threads – the frayed ends of a traumatised family – are woven together in a novel that enfolds rather than unfolds.

Despite the inner journeys of the main characters, this is not a slow read; the prose is crisp, the dialogue sharp; joy and healing as well as sadness draw the reader on to the next loop in Jane Rusbridge’s engrossing novel.

The Devil’s Music (2009) is published by Bloomsbury, and was Shortlisted in the International IMPAC Literary Award 2011.

Jane Rusbridge’s second novel, Rook, is due for release in 2012. Details of events and the first chapter of The Devil’s Music can be read on her website:  www.janerusbridge.co.uk/

If you are seriously interested in knots after reading this book, the International Guild of Knot Tyers (yes, that’s how they spell it) is at www.igkt.net where you can find charts to show you how to make fancy knots just like Grampy.

2 thoughts on “The Devil’s Music : A review”