Salsa, souvenirs, saints, statue artists, or escalope de seitan:  La Rambla has them all at different times and locations.

It also has theatres, museums, markets, and lots of places for changing your money – so you can keep pick-pockets supplied. Depending on the time of day and which part of its length you walk – from the bottom end opposite the docks, to the top end at Plaça de Catalunya – La Rambla can be a sundrenched sensation or a rubbish-strewn rendezvous for layabouts of all nationalities, but it’s always fascinating.

Ask a dozen people to describe La Rambla and you’ll get ten different impressions. One woman I met couldn’t stop talking about smelly drains. Her complaint has a strong whiff of truth: La Rambla borders the old Gothic quarter, Barri Gòtic, the city’s ancient heart that has throbbed for 2000 years – its sewers are entitled to draw attention to themselves. Other tourists rave about the food, riotous nights in the Plaça Reial, or the day their wallet was stolen. Everybody’s Rambla is different: this is mine.

I’ve left my cheap but friendly accommodation by 7am. Behind the Plaça Reial, my hotel is 100 metres from La Rambla, one alley up from the red-light district’s squalid maze leading to the dockyard, but at this time of the morning the streets are pristine. Cleaning crews go through at intervals day and night, though it’s a squeeze for their vehicles in some of these alleys.

They haven’t got as far as the Plaça Reial; it is still hung-over with signs of the night’s revelry.

But there’s no need to rush, its bars and restaurants will be deserted for hours. 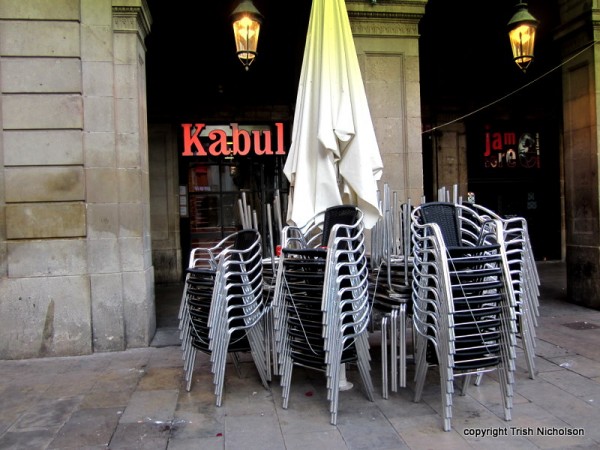 Empty streets reveal touches of antiquity obscured during the day by tangles of tourists in cheeky tee-shirts and shades. I smile with delight at this door-knocker every morning. 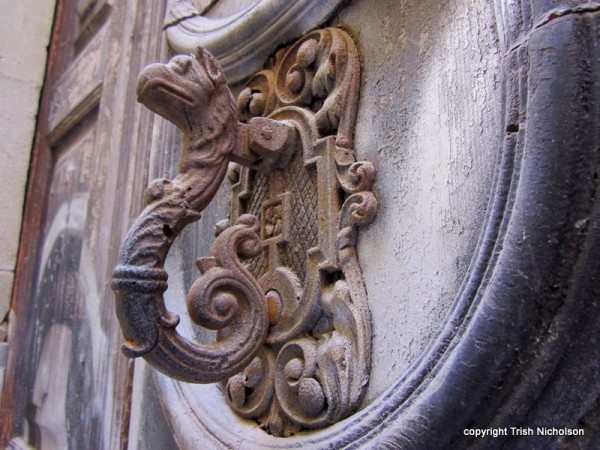 I’m heading for my usual breakfast of papaya, coffee and home-baked pastries at the Mercat de la Boqueria – San Josep food market – half way up La Rambla on the left. 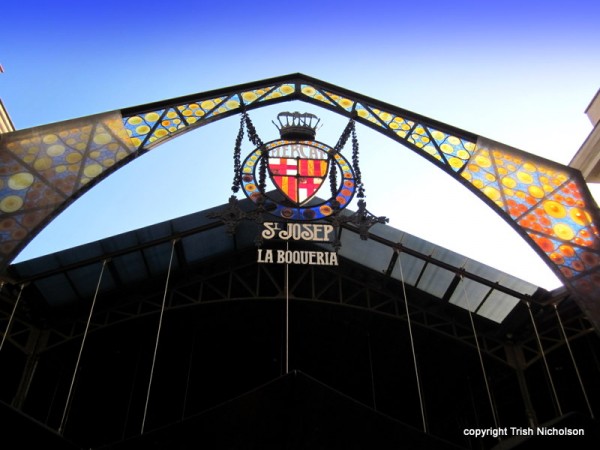 Some traders are still unpacking produce – the market doesn’t open officially until 8am, but I use a small bar at the back which starts early because it serves stallholders. No words are needed to appreciate the appetising sights and smells here; hang on to your bag, saunter along the aisles and tempt your senses. 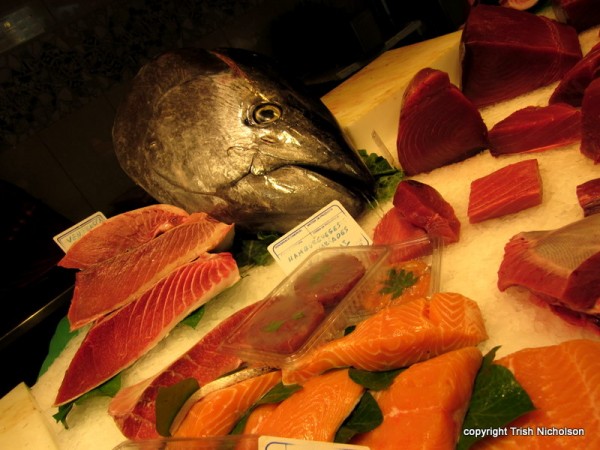 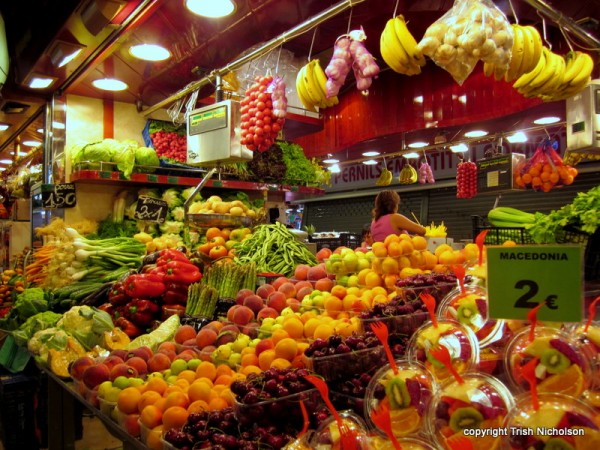 Hands up who wants a fruit salad? 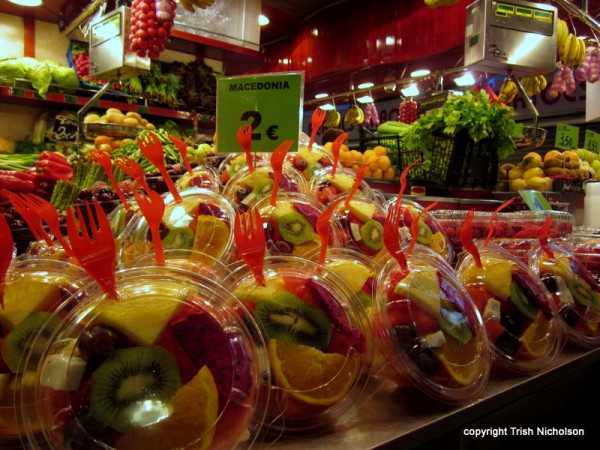 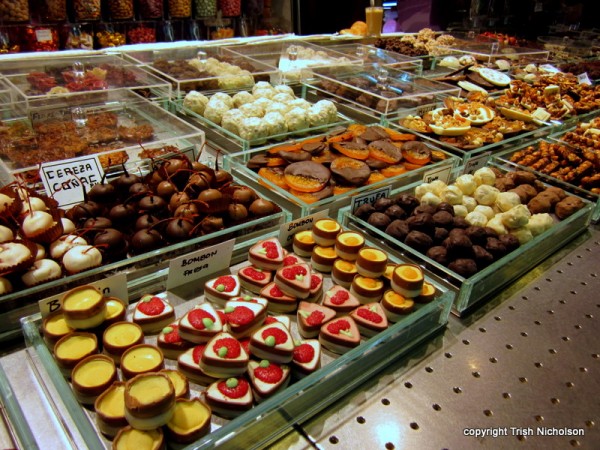 Tearing myself away from the market and just one more bon-bon, it’s safe to meander along gazing at extraordinary buildings because La Rambla is paved and reserved for pedestrians. By early evening it will be lined with cafes and restaurants from end to end; white canvas umbrellas looking down on their matching linen table clothes.

Now though, it rings with the clackity-clack-clack of suitcases dragged along by tourists rushing to the airport bus terminal, and the click-click of office high heels heading to work. The rest of us can stroll in the authentic Spanish mañana style.

And I see this gorgeous dragon on my way to the metro station. 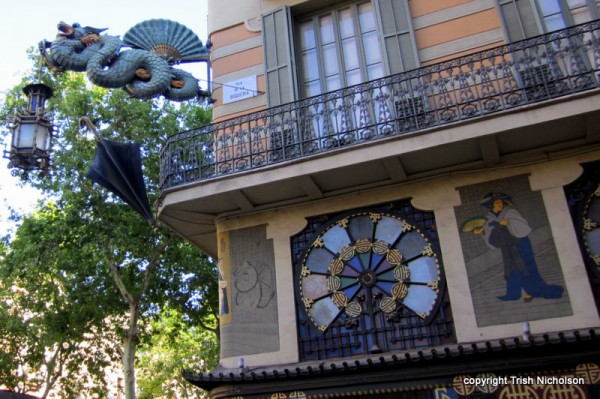 I’m going to La Sagrada Famíliar today, but that’s part of Gaudi’s Barcelona; I’ll take you there another day.

When I return to La Rambla in the afternoon, craft and gift kiosks vie with flower stalls for attention. And there’s La Sagrada – in wax candles this time. 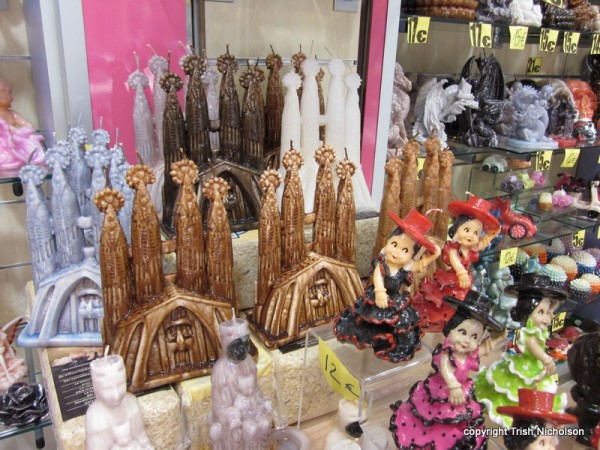 Behind a glass panel an exquisite wax hand is sculptured to hold a rose without fragrance. 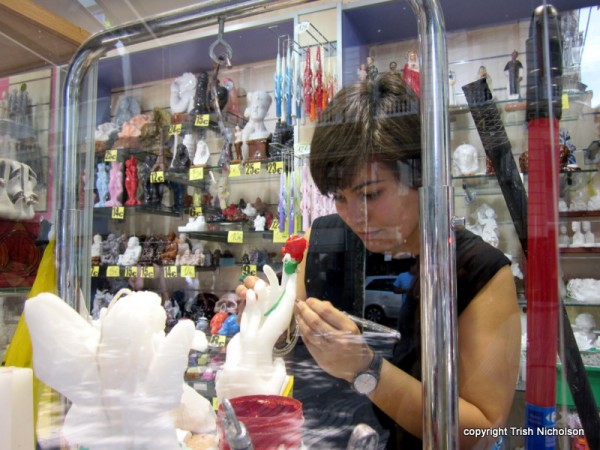 Sleight-of-hand gambling tricks are a good way to divert tourists’ attention away from their cameras and wallets – or so a local woman cautions me as I take this photograph. 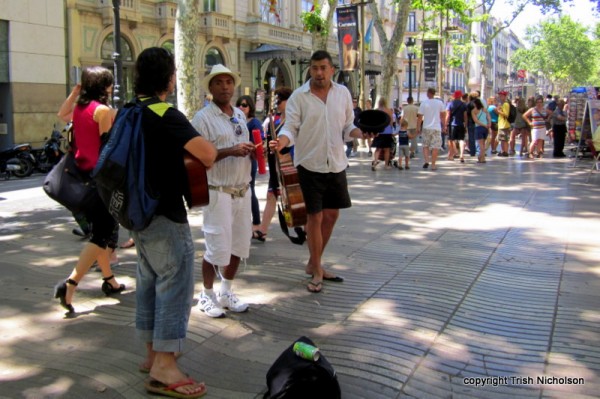 La Rambla is now crowded and noisy, grinding traffic with occasional squealing brakes play a raucous tune to snatches of  passing ‘lyrics’ from a dozen languages. People saunter by, comparing menus, deciding where to drink now or where to eat later. I find the wafts of cooking oil and coffee with undertones of diesel fumes unappetising

Knots of onlookers in the street usually indicate a statue artist; you don’t see these human statues until you push to the front. Actors stand with their backs to the traffic so their audience faces them, but this angel just stepped down from her pedestal to answer her mobile phone! 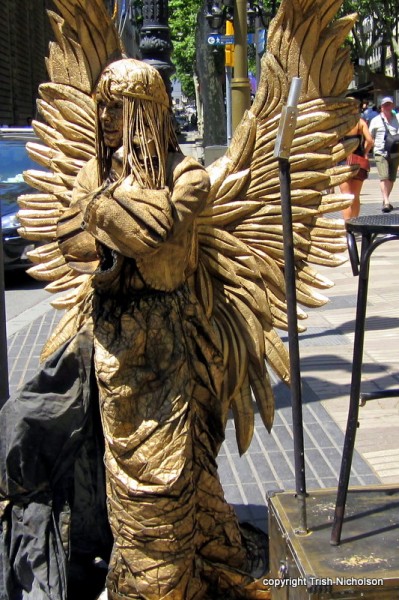 Another is worth a backward glance. 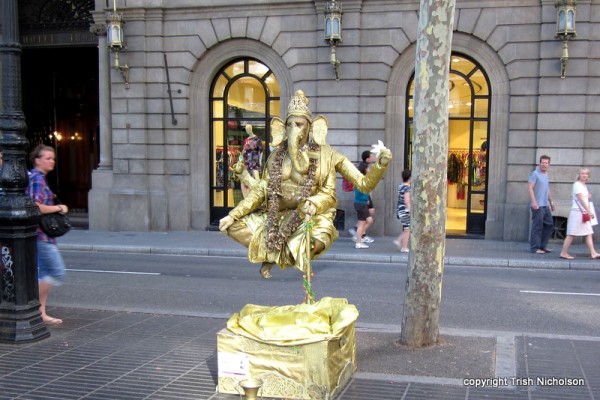 They are clever creations though.

And sometimes the effect is more eye-catching than intended. 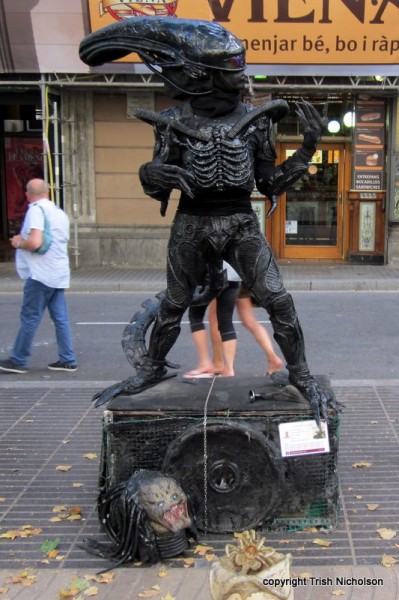 Back at Plaça Reial a stamp and coin collectors’ market is in full swing. 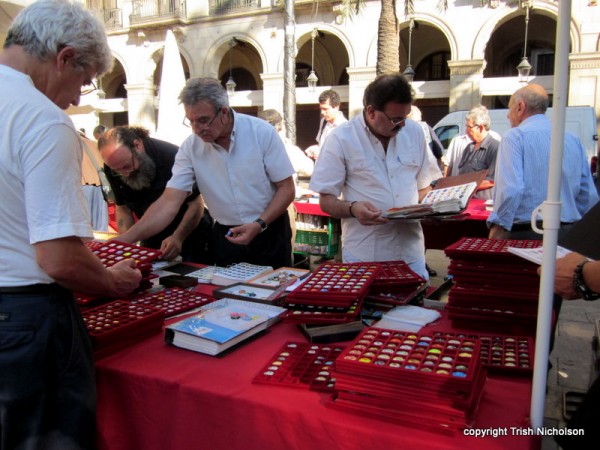 But these exhibits are bottle-tops – signs of recession?

Time to decide where I’m going to eat. 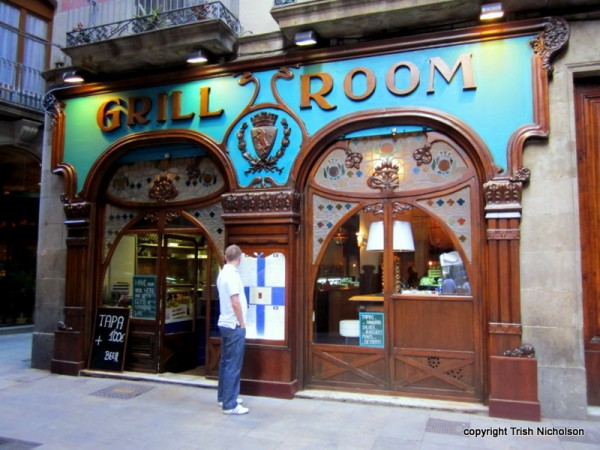 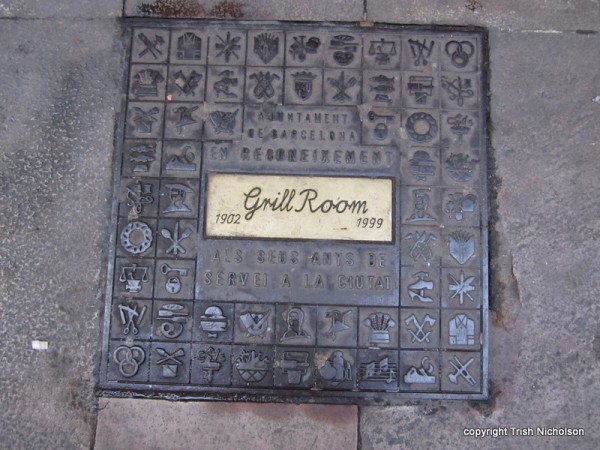 Well, it’s been in business for over 100 years; that’s quite a recommendation.

8 thoughts on “Barcelona: My Rambla”