There is more to the Philippines than sun, sea, sand and…smiles. Although millions of tourists every year head for beaches and night spots, these islands have other extraordinarily diverse environments, peoples and cultures. 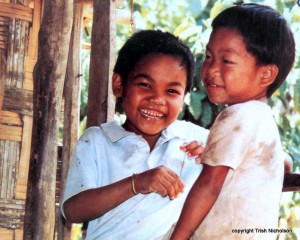 A favourite merienda between meals – or even between snacks – is the ubiquitous pancit, but there are almost as many ways of serving this spicy noodle dish as there are cooks to prepare it.

In addition to many indigenous cultures and languages, different islands have adapted the influence of Malay, Chinese, Arab, Spanish, and latterly, western languages and customs and woven them into their own cultural fabric.

During five years of work and study in the Philippines I was lucky enough to travel widely: from Ilagan in the north, to Davao in the south; from Tacloban in the east, to Puerto Princessa in the west. Here is just a small collection from some of my favourite memories to share with you a little of that diversity. (The two boys in the header picture are members of the Mangyan tribe in Mindoro Island).

While you relax and enjoy the white sands of Boracay island, 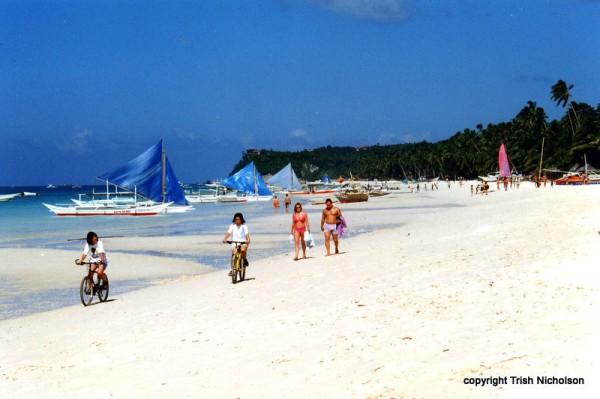 Spare a thought for those who are working: with all the building of new resorts along the seafront, someone has to carry-in the bricks! 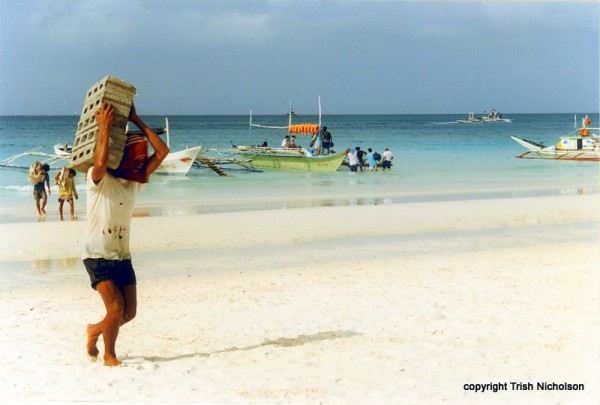 Not everyone benefits from tourism; local families still try to supplement their income with fishing 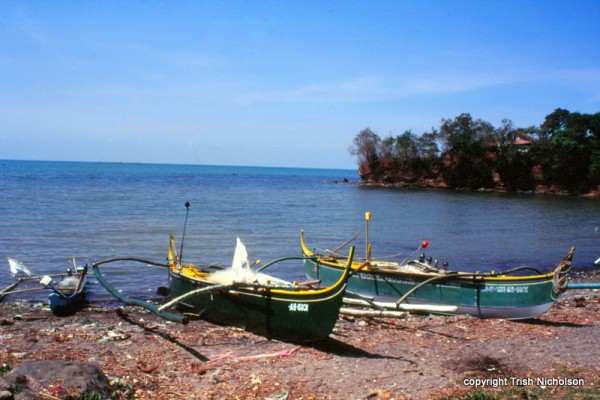 Or with agriculture in what little land is left to them in the hills. 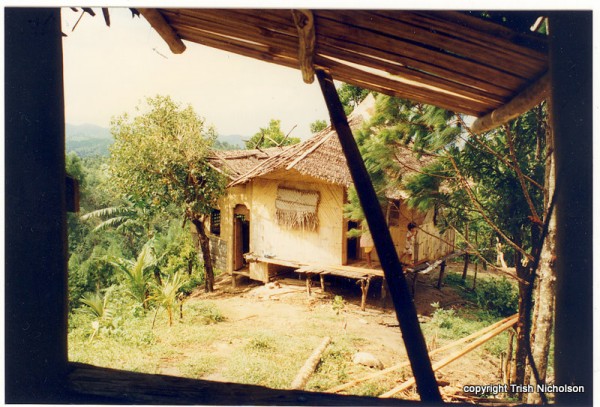 A very old lady on Boracay, one of the few remaining descendants there of the Ati, the indigenous Negrito peoples, told me the legend of how Boracay got its name. The story was passed down to her from her mother-in-law.

Long ago when Boracay was wild and forested, the Ati moved back and forth from neighbouring Aklan to plant tobacco and vegetables in the fertile soil. A group of Spaniards came ashore, attracted by the white sand, and walked into the hills to talk to the Ati. They asked the name of the shells they had picked up from the beach and were told, sigay; they asked what the men were planting and were told, boray – the name of the vegetable seed; from these two words the island became known as Boracay.

Further south, on the eastern side of the large island of Mindanao, is Davao (Dabaw) City. A thriving centre for business, industry and tourism supporting some 1.5 million inhabitants, it suffers also the sleaze, crime and human abuse of any urban conglomeration.

Rural poverty and encroachment of massive agribusiness plantations drive people into the city, if only to a square of floor space in a crowded settlement overhanging mosquito-ridden water. 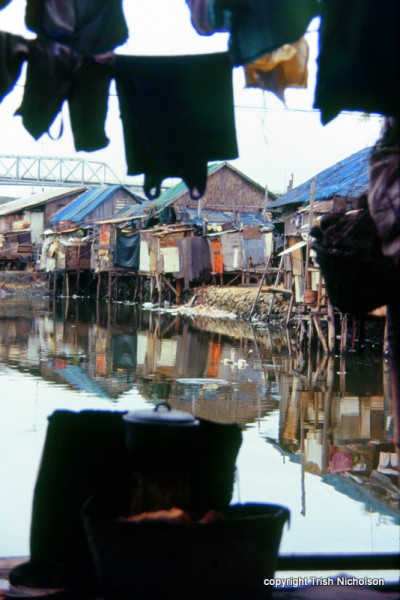 Despite challenging living conditions, the young man living here, who plies his trade as a pedicab driver, is not the only one who sports a fresh, sparkling white tee-shirt every day. The local gang guards his pedicab for a few pesos while he goes for merienda. 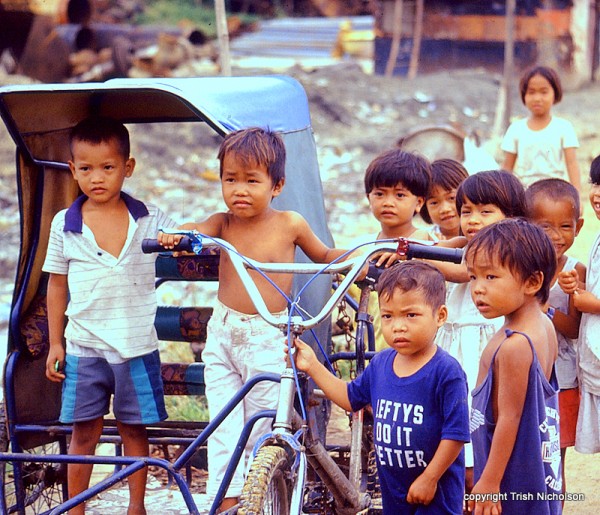 Such is the spirit of making something out of whatever is at hand, Filipinos could teach us a lot about re-cycling – these are made from old truck tyres in the style of traditionally woven rattan. 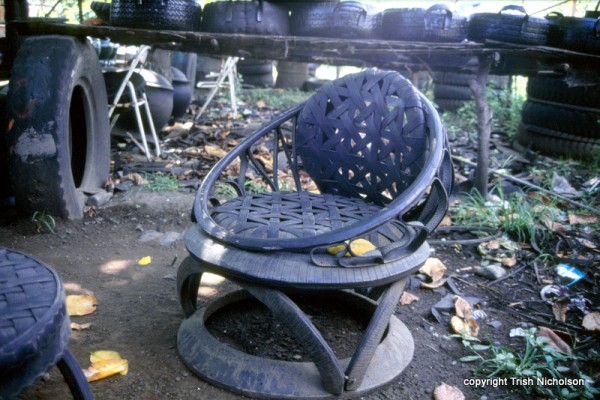 And the love of colour and pattern are evident in the various indigenous weaving styles. Each tribe has its own distinctive patterns handed down through generations. The weaver pictured here is a Mandaya, from Davao del Sur. 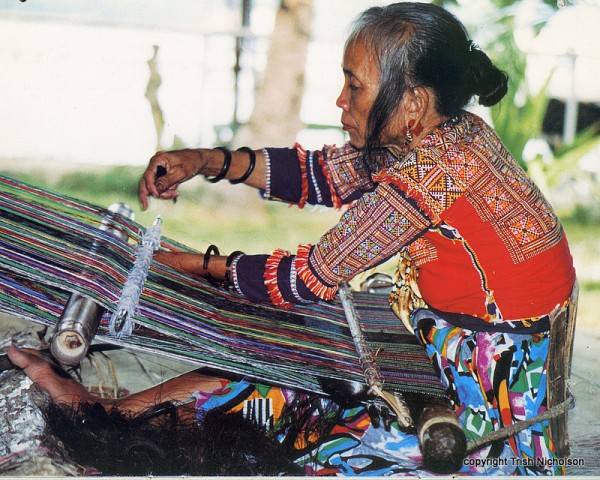 Familiar icon of the Philippines, the jeepney – originating from a long-based version of the American Jeep – is a tough vehicle, but overloaded with people or goods as they usually are, they can run into trouble on muddy country tracks. 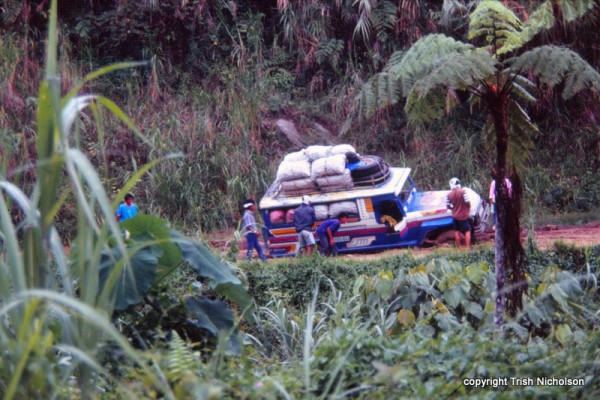 And now we are heading towards northern Luzon, passing through another hazard. Recidivist volcano, Mount Pinatubo smokes and rumbles and never rests, but in 1991 it threw a major eruption that blew off the top of the mountain, scattering debris for miles around. Worse damage, though, was caused by torrential rains that followed. Volcanic dust quickly turned into running mud which smothered rice fields, farms, villages and roads in metres deep liquid ash – lahar. Dried out and compacted, this is what the man on the carabao is riding through. 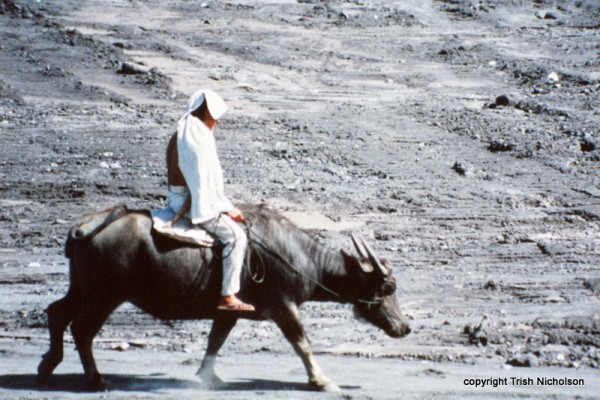 About 100 miles further north as the crow flies, on the edge of the Cordillera, is Baguio, a city of cool mountain breezes, clear bright sunshine and prolific markets. For Filipinos who can afford it, it is a favourite retreat from the heat and pollution of lowland cities. 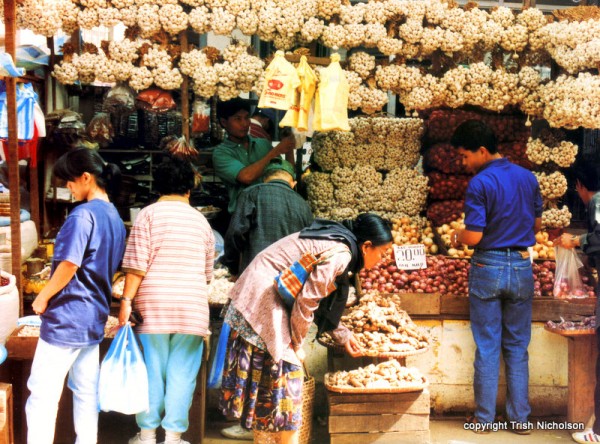 Our final destination is Ifugao, home of ancient tribal cultures and rice terraces which their inheritors struggle to maintain. The village of Batad, pictured here in the last glance of late afternoon sun, is just east of Banaue. 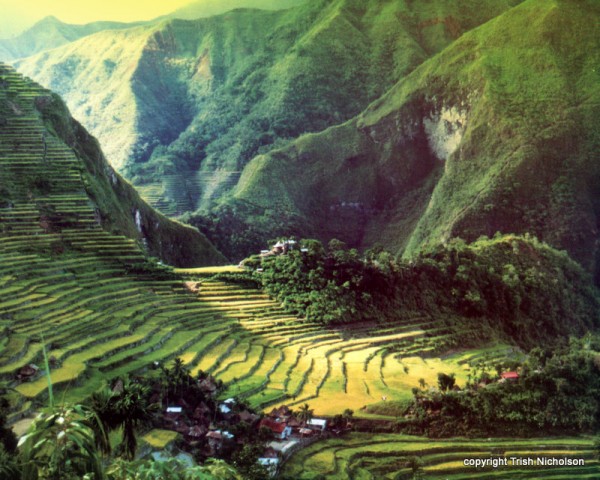 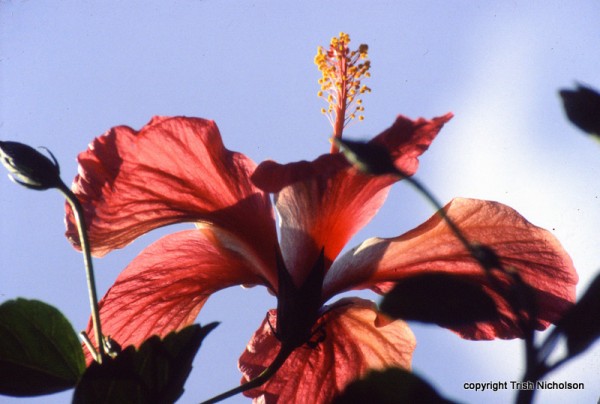 Like the ant you may not yet have noticed on this hibiscus, a closer look in unexpected places can often reward us with deeper understanding of where we are, and perhaps who we are.

And I took a closer look at the town of Mogpog on Marinduque Island and at Moryonan – the re-enactment of the legend of Longinus in celebration of the Easter Passion. As a social anthropologist, I spent three years studying Mogpog and the Moryonan, living with a local family for some of that time.

The masks and costumes of the Moryons are spectacular, but Moryonan is a deeply religious event in Mogpog that involves the whole community. Inevitably, these cultural expressions are changing under the pressure of tourism and ‘modernisation’. Travel slowly, look closely – what you see may not be there again.

If you enjoy travel and travel writing, try Inside the Crocodile: The Papua New Guinea Journals (in paperback and ebook), and Journey in Bhutan: Himalayan Trek in the Kingdom of the Thunder Dragon (ebook only).