Yes, there really is a town called Mogpog.  Mabuhay! – Welcome! 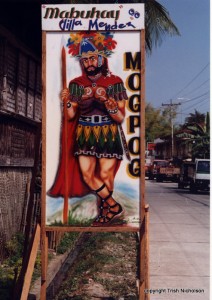 Mogpog, on the Island of Marinduque, in the Philippines, is the only place in the Philippines (or anywhere else for that matter), where you can see the original traditions of the Longinus legend re-enacted throughout Easter Week:  called Moryonan. The Moryons have been roaming Mogpog in their spectacular masks and costumes to carry out their rituals of penance (panata) as part of the Moryonan for almost 150 years.

This is the first in a series of blog posts to share with you some tales of Mogpog traditions.

This Travel Tale of Mogpog is about the Mogpog Band

The town’s own band plays at all the processions and parades during Moryonan, but also at the town Fiesta (which is in May), for Christmas events and any festive occasions when music is needed.

The Mogpog Band was started in the early 1900s by a member of the local Livelo family, but its reputation goes beyond the Island of Marinduque.

In this photograph, taken in 1950, the band was asked to play in the town of Pola, in the neighbouring island of Mindoro to help celebrate fiesta. In the middle row, second from the left is Senen Livelo, on his left is his father who founded the band, and his father, Ignacio Livelo, started the first school in Mogpog in 1850. A nipa (native material) hut on their plot was divided into two areas: music was taught in one, the Spanish alphabet in the other. Ignacio’s wife, her two sisters and their husbands, all played musical instruments in the church.

Forty-seven years on, in 1997, Senen Livelo and a few of the band members, some in their eighties, are holding a jam session in the Livelo compound in Mogpog. 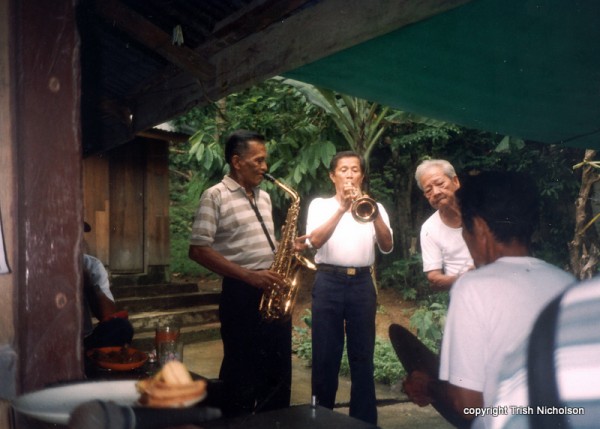 Other members, playing in the town during that same year.

Mogpog Brass Band has now grown in size, has smart red uniforms, and plays in other places as well as Mogpog, including at the annual Feast of Black Nazarene in Quiapo, a district in the old part of Manila City. Click the link below to see them on a Youtube video.

[This is an archived post originally posted in 2011 and based on field research carried out in 1995-7. Doubtless some things have changed in Mogpog, but they still celebrate the traditional Moryonan, and it is good to record and remember the recent past for future generations.]

Rituals, enactments, street theatre – they are all part of Story’s rich  repertoire, along with myths, fables, epics, sagas, legends, folktales and novels, a heritage that has sustained us physically, spiritually and socially since our ancestors were hunters and gatherers. Learn more in this global cultural history of storytelling: A Biography of Story, A Brief History of Humanity.

If you missed the other Tales in this series, the links are below:

Travel Tales of Mogpog 3: Behind the Mask

8 thoughts on “Travel Tales of Mogpog 1”