This second tale of Mogpog is about a very important section of society – women. Women can be Moryons, too; masks with feminine features are carved especially for them.

Living in Mogpog, working on my research, I met many wonderful, generous people, especially older Mogpogueños with fascinating memories of the past. Chief among them were my hosts, who asked me to address them as Ate, and Tatay – Tagalog for ‘elder sister’, and ‘father’, respectively. They were, and still are, ‘my Mogpog family’.

One of the people they introduced me to was Leonida, the gracious elderly lady who gave me a copy of this photograph of Mogpog’s influential ladies taken around 1920. Some of their expressions are uncharacteristically grave because photography was a serious and expensive business; they would have been told to ‘keep still’ for the camera. 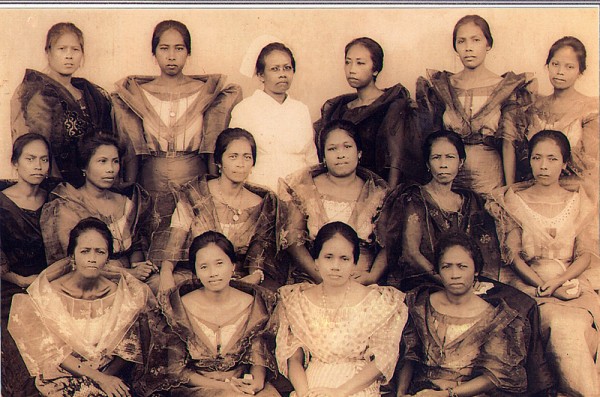 Such is the cultural continuity in this most traditional of towns that more than 70 years after this photograph of an earlier generation was taken, Leonida knew all their names. How many of us could name the sepia ghosts haunting the pages of our old family albums – if we still have them? I won’t list them fully because their descendents may not want that, but they include Christian names like Marciana, Teofila, Epifania, Eusebia, Alejandra, Concordia and Expectacia – names with the poetic resonance of a bygone era.

It amazes me that in a sticky tropical climate and at a time when laundry was by hand, when there was no electricity, transport was mostly by carabao (buffalo) cart, and wrinkle-free fabrics were not yet invented, these ladies were so impeccably ‘turned out’.

For everyday wear, clothes were made of a local cloth called sinamay (woven from abaca, banana leaf fibre) but for these heavily starched formal dresses, well-off families would acquire silks, brocades and fancy trimmings from China. Chinese traders have plied the coasts and islands of the Philippines for the last 2000 years.

The traditional dress of Filipinas – the baro’t saya – is a full skirt and loose-fitting long-sleeved blouse. These ladies are wearing the formal, and matching, version of this known as the maria clara: named after the main character in the classic Philippine novel, Noli Me Tangere, written in 1890 by Dr Jose Rizal. Rizal became a national hero for his role in the revolution against colonial rule; he was executed by Spanish authorities in 1896. Today, the maria clara has morphed into the terno: made of anything from simple silk to gem-encrusted brocade, it remains an icon of Filipina femininity, worn, for example, by Imelda Marcos – the lady with the shoes.

The ‘elite ladies’ in our photograph may have lived in houses as grand as this must once have been – a judge used to live here – or in something more modest, 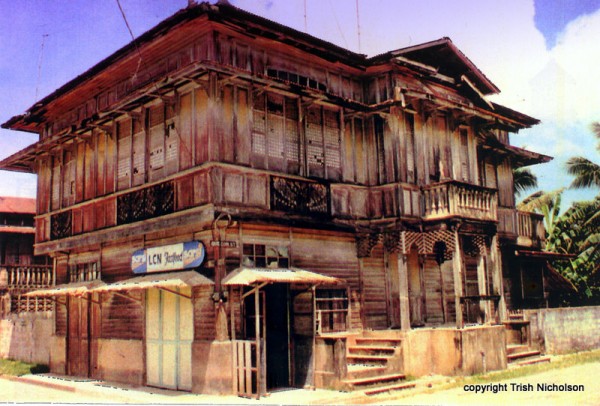 but they were pillars of society, members of lay religious groups, caring for the santo figures in the church, organising social and religious events, singing and playing music, giving hospitality – and no doubt roundly scolding the young and lesser relatives who carried out the household chores.

The role of women in Mogpog still centres on Church, family and community. During Moryonan, the two-hundred or so masked and costumed Moryons who roam the town and perform rituals in the church throughout Mahal na Araw (Easter Week), are provided with lunch and merienda (snacks) each day, prepared and cooked by local households.

But however much there is to be done in Mogpog, there is always time to exchange a little tsismis with a neighbour –

[This is an archived post originally posted in 2011 and based on field research carried out during 1995-7. Doubtless some things have changed in Mogpog, but they still celebrate traditional Moryonan, and it is good to record and remember the recent past for future generations.]

Rituals, enactments, street theatre – they are all part of Story’s rich  repertoire, along with myths, fables, epics, sagas, legends, folktales and novels, a heritage that has sustained us physically, spiritually and socially since our ancestors were hunters and gatherers. Learn more in this global social history of storytelling:  A Biography of Story, A Brief History of Humanity.

If you missed the other Tales in this series, the links are below:

Travel Tales of Mogpog 3: Behind the Mask

11 thoughts on “Travel Tales of Mogpog 2”