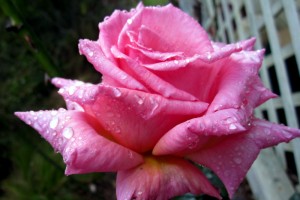 “Why can’t I? It’s an abbreviation.” Harold’s truculence is purely theatrical, designed to arouse his audience, an objective he usually achieves.

“It’s not in the Oxford and, well, it’s rather vulgar.” Looking at the Scrabble board again Lily’s eyes light up. “Oh. Alright then, yes, you can have it.” Harold places his tiny letters carefully, conscious of the devastation his large hands can cause in so delicate a task. He has only two little tiles left on the stand but what can you do with ‘J’ and ‘Q’? She wins every time – the penalty of playing with a retired professor of English Literature. Lily laughs, her elegantly manicured fingers clutching a single letter already hover impatiently over the board. “Good, now I have somewhere to put my ‘M’, worth three, plus triple word, let me see, that makes twenty-one and I’m out!” She throws up her arms with a flourish, letting the wide sleeves of her chiffon blouse cascade from her elbows in frothy cream folds.

“Oh. Lily, have you no shame?” He glares at her from under bushy white eyebrows with mock censure, a look which – in its authentic form – could make the hardest criminal quake in the dock not so long ago.

Lily chuckles; a soft purr that vibrates in her throat. Her looks have faded a little with the years, the ash blonde requires some encouragement these days, laughter lines around her mouth and eyes refuse to be suppressed, but she is still a strikingly handsome woman.

“I made some of your favourite brandy snaps this afternoon – I’ll put the kettle on shall I before we have a final game for the evening?” Lily rises from her favourite basket chair, pokes the fire and puts another log on. Snow is forecast for tomorrow; she likes the nostalgia of a white Christmas if not the inconvenience.

“Brandy snaps? Perfect. Tea? Er … Well, I brought down a rather good bottle of claret, thought we’d have a treat tonight as we’ll each be subjected to Tesco’s plonk with our respective offspring tomorrow.”

“That sounds lovely. I’ll bring some glasses and the corkscrew, too.” She pats Harold’s shoulder, walking passed him towards her bijou kitchen at the back of the flat.

Reaching for the wine glasses she picks up a cloth to give them a polish – Harold hates smeary glasses, and so does she. They’d known each other since their undergraduate days. They were part of a foursome then. She was very smitten with Harold and he with her, or so she thought, but somehow they each ended up marrying someone else. Then they all drifted apart with the responsibilities of careers and families – just the occasional re-unions which were always fun. She’d lost touch in the last few years – being widowed could be isolating, one had to find new ways of staying involved with life. But she had always followed Harold’s distinguished career at the bar; had even sat in the gallery for an important case a few times. Following one particularly dramatic victory, part of her wanted to go round to chambers and congratulate him afterwards, but when a mature woman becomes single again she has to be a little circumspect about looking up old loves. She had resisted.

She rummaged through the kitchen drawers trying to find the swish new cork lifter she got the other day. You’d think in a small space you wouldn’t be able to lose anything, but it’s quite the reverse: everything lurks behind something else, it’s a perpetual game of hide and seek.

Harold was fearsomely eloquent in court, but still as shy and sensitive out of it as he had been when an undergrad. It had been wonderful to get to know him all over again these last few months. She remembered little of that last charity dinner except finding myself sitting next to Harold. He told her Phyllis had died the previous year. She was sorry to hear that, they had all been such good friends in the old days. Then he said, “I’m about to retire, Lily, from court work anyway, and I’m looking for a flat in a quiet area, but not too far out. Do you know anywhere? They get snapped up so quickly.”

“Well, as it happens, the flat above mine will be vacant in a few weeks, the owner is going abroad.”  She didn’t mean to put him on the spot, it came out without thinking, but he was so enthusiastic he phoned about it the next day.

She takes the tin of brandy snaps out of the fridge and struggles to prise off the lid.

Left alone in Lily’s cosy sitting room, Harold leans back in the old wing-chair, extends his legs towards the fire and sighs – a soft ripple of air, a song of contentment. The room is neat but not uncomfortably tidy; books are allowed to lounge against the legs of stools, or on table tops, waiting for their next performance. Newspapers huddle on the floor exchanging gossip columns, and plump cushions have strayed from their chairs to nestle beneath book cases. A few discreet Christmas decorations grace the mantelpiece in glittery glasses.

With a muffled grunt, Harold sits up straight, sweeps the tiles off the board into the green cloth bag – swearing under his breath as he bends down to pick up escapees from the floor. He stirs the contents. Still grasping a handful of letters, a conspiratorial grin spreads across his face.

When Lily returns from the kitchen with biscuits, glasses and the elusive bottle opener, Harold is reading the reviews in the Guardian, the bottle of claret waiting to be opened on the table beside him. He opens the bottle, fills their glasses; she puts the plate of brandy snaps between them. The game proceeds briskly.

“The board is filling up much faster this time. You’re playing better Harold, is it the wine helping your concentration?”

“No, my dear, the stakes are higher now, that’s all. This is an excellent wine, though, I must get some more of it. Whose turn is it?”

“Look at this. I’ve got all seven letters to make ‘LAUGHTER’ and the damn thing only scores fifteen. Why are my double score squares always under the smallest value letters?” Harold sighs, reaching for more tiles.

“Never mind, it looks as if you’re going to win this time.”

The fire has subsided to a dull red; Handel’s Messiah has long since grown silent on the CD player. Neither has noticed.

It is Lily’s turn.

“Ah. Thank you for that ‘M’.” Harold pulls back his cuffs and lays down his letters with deliberate ceremony like placing votive candles – ‘ARRY ME’.” Lily glances at the board. Her eyes glisten with a surprised and delighted smile her lips cannot quite conceal: “That’s two words, Harold, dear. You’re breaking the rules.”

“Thank you, my dear. Another glass of wine?” 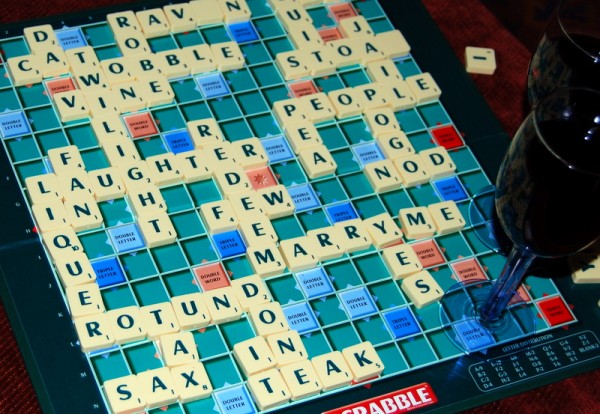