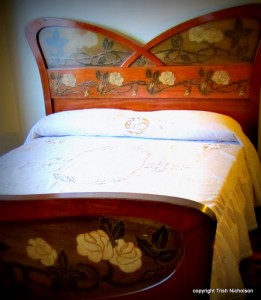 I hardly knew Madeleine. Perhaps that was part of the problem. The other part was that she was particularly house-proud. Shiny surfaces, absence of clutter and not a speck of dust lurking in the crevices of skirting boards were, to her, visible trophies of accomplishment and indicators of some semblance of control.  I am not criticising. We all have to find our own ways of wrestling life’s habitual chaos into some kind of liveable order.

Madeleine was neat in herself. Shoulder length hair was pulled back so tightly into a pony tail it achieved a face-lift – not that she needed one. Her hair was the sort of blonde that naturally glowed with different subtle shades as the light sought it out; left loose it would have been lovely.

Her speech was spare, too, as if releasing too many words into the air would allow some to miss their mark and linger untidily. All of this, about her appearance and self expression, I appreciated in retrospect: I had not met her face to face. We had been introduced by proxy through a mutual friend and had exchanged a few emails. When I planned a visit to her area, she generously offered to put me up for a couple of nights and I was looking forward to knowing her better.

She showed me into the spare room with a warm smile, hovering silently in the doorway. The room was spotless: not a wrinkle in the plain bedspread so boisterously white it made my eyes smart; not the tiniest smear on the windows to attract the sun’s accusing finger. Madeleine retreated to the kitchen to make tea. Feeling daunted by the surroundings, I carefully wiped the bottom of my overnight bag with the hem of my skirt before placing it on the bed.

I don’t wish to seem ungrateful: although every other surface was entirely bare, there was a vase of flowers on the chest of drawers. They were clearly from a florist, meticulously arranged, bright and sophisticated, a platoon of colour, but in their conformity, lacking any sense of organic vitality; expensive, too, and I worried about the investment sunk in my visit and how I should perform as a guest so as not to disappoint. I had seen Michaelmas daisies and lavender growing beside the front path and would have much preferred their simple welcome of pollen dust and dropped petals.

Maybe it’s because I’m a writer and all writers are required to be eccentric, even slightly mad – and those I know have no need to fake it – that this kind of setting makes me feel uncomfortable. If I had wanted to sleep in a room sterilised of all human traces, devoid of the personality apparent in an abandoned comb, an odd sock ruckled up just as it was yanked from a foot and left skulking under the bed, or a long golden hair caught in the weave of a thread-bare chair back, I would have stayed in a hotel.

I like a guest room to have character: a hotchpotch of old family photographs, their subjects, perhaps, demoted from pride of place due to some intriguing indiscretion; bottom drawers full of discarded Christmas gifts too hideous to display publicly; stacks of magazines and newspapers pressing up against the bed springs, and a friendly amount of dust. It reassures me that I am not disrupting the regular rhythm of the household, nor placing an additional burden of work on my hostess, but above all – it is far more interesting.

Travelling and working overseas, I rarely saw the few relatives I could claim. But one aunt lived not far from the airport and I had stayed there overnight a couple of times, at roughly three year intervals, when returning from foreign contracts. Her guest room was perfect: my own scattered debris remained imperceptible. On the last occasion, my entertainment was complete when I found, in the bottom of the wardrobe, a tattered cardboard box with ‘Oxfam’ scrawled across the side in thick fibre pen. Among other items inside the box was the carefully chosen souvenir I had brought her on a previous visit from some exotic location. I noted, ruefully, there was ample room for another.

The ideal guest room, as I have defined it, adequately describes my own spare room, but as a hostess, I pride myself on accepting without judgement the foibles of others, so if you are coming to stay with me and this sort of environment bothers you, do pack a duster.

Who knows what creates a writing spark. This random offering was inspired by the chance remark of a friend as unlike Madeleine as you can imagine, and came to me line by line as I vacuumed my own house, about three weeks in arrears – no, I don’t exaggerate: I’m a serious narrative non-fiction author 🙂

6 thoughts on “The Spare Room: a sketch”