Bhutan is no Shangri-La, but it seems to have a better grasp of happiness than the rest of the world. So what does colour have to do with it?

The first thing you notice when you arrive in Bhutan is that colour is everywhere. A row of shops is a feast for the eyes before you go inside to browse exquisite local crafts and products.

Even Public Carriers, ­ simple, open backed trucks that ply steep, twisty roads through the Himalayan foothills, are decorated not only with painted images, but often with tassels, streamers or flowers.

As you might expect, dzongs and temples are the most elaborate in architecture and decoration, but even a modest side door in a monastery is not neglected. And the three earlier posts in this series of Travel Tales of Bhutan give vivid examples of colour in dress, murals and thangkas.

Along with this exuberance, whether in a town or on a mountain, there is a deep undercurrent of serenity ­­­– at times it is almost palpable. But it is superficial hyperbole to call Bhutan a Shangri-La.

In the 50 years since Bhutan emerged, cautiously, from centuries of self-imposed isolation, it has contributed to the modern world as well as been changed by it. To take one example, tourism began only in 1974, with less than 300 visitors; in 2012, the Tourism Council is forecasting 100,000 visitors, the largest proportion from India and elsewhere in Asia.

A wise tourism policy that focuses on high-end, accompanied small-group experiences based primarily on culture and trekking has, up to now, protected Bhutan from the destructive aspects of tourism that have ravaged parts of neighbouring Nepal.

There are sound political reasons for Bhutan to become part of the international community, but modernisation has a price: a drift to the towns, youth unemployment, and disparities between standards of living in rural and urban populations. Access to ‘Western’ culture through television and the internet have brought other changes, increasing the expectations and frustrations particularly of the young, and Bhutan has a young population.

But measuring the nation’s wellbeing not only in economic terms, but in Gross National Happiness – a practice that Bhutan has been refining for the last 20 years – offers a positive way of dealing with the tension between economic development and the sustainability of culture and environment. It should be heeded by the rest of the world where both culture and environment have for too long been treated as merely ‘collateral damage’ in the advance towards greater wealth for a decreasing number of players.

And what has colour got to do with all of this?

The colours of Bhutan are not simply decorative: they have meanings. Colours, and the motifs they depict, are part of a whole system of symbols that define a history and a Buddhist culture shared by the vast majority of Bhutan’s population. In Bhutan, culture defines the nation.

At the simplest level, the red band around the tops of dzongs, monasteries and chortens, indicates the presence of deities or religious functions and artefacts.

Walls bearing ranks of prayer wheels, and even the humblest chorten beside a narrow path share this colour symbol and its meaning.

An outside corner of Tashichhodzong bears intricate patterning and colouring that I lack the knowledge to interpret, but the stylised figure of a bird represents the raven, a symbol of Mahakala the protective deity of Bhutan, depicted also on the royal crown.

My point is that colour is part of a complex cultural expression of shared values. People are surrounded by these symbols in everything they do; the culture becomes a source of combined strength, a form of power.

Bhutan has a turbulent history, the armies of Tibetan, Chinese, Mongolian and British Empires have all, over the centuries, tried to take over its rich, fertile valleys and strategic position. They were all defeated. Bhutan has never been colonised. It survived a brief period of civil war, but this too was resolved ultimately through a unity of faith and purpose.

A culture of deeply held and shared values provides strength to withstand the tensions between economic development and social stability; between globalisation and national identity. And it applies not only to Bhutan. 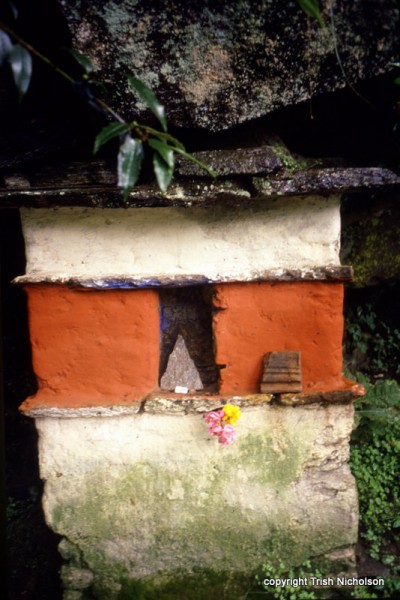 “…the landscape is as glorious, from fern-filled rocky cleft to vast horizons etched in purple peaks; the presence of history in ancient temples and isolated chortens, and the way of life in the high mountains and distant valleys all mingle in a balance of past with present, people with nature. The same knee-wrecking terrain challenges the lungs while it gives balm to the soul.

Cubes of smoked yak cheese are still items of barter; river gods sweep away footbridges in floods of temper; Jhomolhari resides on her mountain throne, and prayer flags rasp out their mantras from high passes to subdue the restless earth.”

Excerpt from the illustrated e-book travelogue: Journey in Bhutan: Himalayan Trek in the Kingdom of the Thunder Dragon.

2 thoughts on “Travel Tales of Bhutan: the Colour of Happiness”