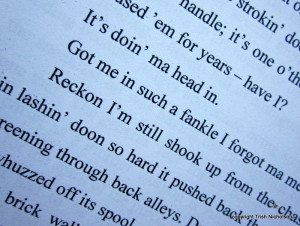 In a recent post on inspiration, I mentioned my natural tendency to ‘see’ time, space and events as visual scenes and patterns. Here, I confess to hearing voices. No, not literally – they’re not about to take me away – but I am sensitive to the way my characters talk: inflections, hesitations and pronunciations that reveal their origins and emotions.

It comes from a habit of listening. In my raggle-taggle childhood, my presence was overlooked while regular fracas worked themselves out with the required amount of shouting and door-slamming. And by snuggling deep into the ancient armchair, warming the back of whoever was sitting there, I could lurk unnoticed way past dreaded bedtime.

Voices are evocative. We may recognise people by their voice alone and the slightest variation in tone can tell us how they are feeling – it embodies the whole person.  When a friend was widowed a while ago, she kept her husband’s recorded message on their answer machine for over a year. Some people thought this ghoulish but I could understand her wanting to retain it.

Characters’ distinctive voices are as important to me as their physical appearance, gestures or dress; the way they speak has grown out of where they were raised and who they have become. Writing in accents and dialects is often discouraged because it requires more effort to read, but I continue to use this key characterisation because there are ways to portray it while retaining readability.

The knack is not to attempt a phonetic rendering of an accent, but to give a sense of it by judicious use of idiomatic phrases, word order, and dialect words or contractions that are either self-explanatory in context or well known. It is important to be consistent in their use and they should be authentic for a particular language or region – the internet is an excellent resource for checking this: Google almost any dialect you want.

Here are a few examples from some of my earlier short stories:

”And I make for you Tavë Kosi, I think you like. Is special Albania food of bake lamb and the yogurt. Oh Martin, is like dream. I afraid one day to wake up.” (Eden’s Promise).

Difficulty with tenses and when to use the definite article here gives the sense of English spoken as a second language, and the mention of a traditional national dish shows us the East European origin while being a significant element in the mood of the story. (Google is also good for ethnic recipes).

“God knows I ain’t no angel. I’ve done dope and a good bit of thieving in my time. Got put in the slammer for it too – twice.  But Jake. He was a whole nuther thing. Some guys runnin’ dope are as dumb as a box o’rocks. Not Jake the Snake.” (Runnin’ the River).

This story, told from the first person point of view of a Texan, uses local slang with obvious meanings, and idiomatic phrases characteristic of the area. It helped that I have been to Texas and worked with a Texan colleague for some years.

“I ken fine who they are. Trouble is I cannae figure why they’re dead…. Got me in such a fankle I forgot ma medication. Took a double lot to make up for it.

Reckon I’m still shook up from the chase last night.  Real dreich night it was, too.” (Now’s the Day).

Although authentic, this is far from a full-blown Scottish Highlander’s dialect because that would be too hard for Sassenachs to understand. Instead, I used common contractions and words in popular use. You may not have seen ‘fankle’ before but its general meaning is clear within the phrase and it is a delicious word – I was amused recently to see it in Iain Bank’s novel Stonemouth. With familiar regional accents, be careful to avoid stereotyping: Scots really do not start every other sentence with “Och aye, the noo.”

I got so worried I went to see ’em; had to go on my own ’cause George was workin’. But after some argy bargee the manager said it would be all right so long as we’d a permanent address. We was still livin’ at East Street then.

“Is that permanent?” he asked, squintin’ at me over his specs.

“We been there more’n forty years, how permanent do yer want?” I didn’t mean to snap but ’e fair got my dander up. (A Man of His Word).

Strategically dropped aitches and contractions form the basis of the narrator’s south coast/London accent. Using consistent forms but not every time, together with word choices, it maintains Maisie’s characterisation without making it too hard to read. I was a little concerned about the accent in a longer story, but a reader’s Tweet said he not only enjoyed it, but wanted to know about Maisie’s early life and would I, please, extend it to a full novel.

As writers, we have nothing to lose by experimenting, pushing our boundaries. We can always use the ‘delete’ button or, better still, save our little excursions in a file for some future time. No writing is ever wasted.

Trish Nicholson is the author of A Biography of Story, A Brief History of Humanity, a global history of storytelling. If you love stories as a reader, a writer or an oral storyteller, you can find out more about Story HERE.