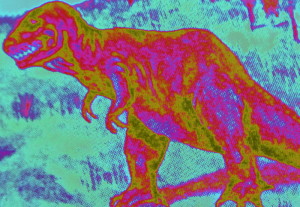 Be not afraid. I’m not about to bring in a Tyrannosaurus rex, a Brachiosaurus, or even a Brontësaurus, but a book of words. Not necessarily harmless – words can savage – but perfectly safe and rewarding for a writer to approach.

So why did fear of the Thesaurus rise like noxious vapour from comments on a blog I read recently? The main objections were these:

1. Thesaurus contains long and obscure words that nobody understands.

2. The words are often archaic or simply old fashioned.

3. There is no such thing as a synonym: each word has its own meaning.

Undeniably there is some truth in each of these comments but a very partial truth: the problem is with the user, not with the tool.

As with a dictionary, long words are listed in Thesaurus but just as often a shorter word is suggested: in my Collins edition, under ‘conflict’ is ‘strife’, or ‘clash’. More formally, ‘contention’ or ‘dissension’; more violently, ‘battle’ or ‘combat’, and what is obscure about ‘antagonism’?

Certainly my big, battered International Roget’s Thesaurus dates from 1945, but for ‘rejoicing’ it offers ‘giggle’, ‘chuckle’, ‘snigger’ and ‘grin’. True, you can also find ‘revelry’, ‘merriment’ and ‘gladden’ but these dated words can be useful in portraying characters of a certain age or temperament, or in a story set in an earlier period. They resonate, create verisimilitude, or indeed, ring true.  And what fun the vowel-laden Scrabble player can have with ‘risible’.

The third comment is perhaps the most important. Few words convey exactly the same sense as another or are so similar they can be freely interchanged, and that is where I find the greatest value in Thesaurus. Words have different origins and life stories that create their individual personalities.

For a simple example, the Oxford English Dictionary quotes ‘shut’ and ‘close’ as synonyms. They are the same in that the door is no longer open, but ‘shut’ is from Old English scyttan, becoming in Middle English shutten as in shooting a bolt and has the harsh, abrupt tone of that action. The ancestor of ‘close’ is an Old French word, clore, to close off; the sound is of a longer, more gradual movement. The result is the same, the ‘wood is in the hole’ in either case, but in a story, I would choose one or other according to the mood I want to create, and the rhythm and pace that suits my sentence.

More often, the meaning of ‘synonyms’ is not quite the same. The emphasis is different and one word may fit more comfortably in a particular sentence or context than another. Understanding these nuances avoids repetition while adding precision to an act, idea or description; it can even define character.

Another simple example:  Collins lists twenty-nine synonyms for ‘annoy’. Of these, ‘ruffle’, ‘tease’ and ‘peeve’ seem fairly mild and do not imply a strong reaction; ‘harry’, ‘harass’ and ‘molest’ are stronger but suggest the victim is relatively powerless; but if you ‘madden’, ‘anger’ and ‘provoke’, expect some potentially violent pay-back. Or, depending on the characters involved and the nature of the tale, you can opt for ‘bug’, ‘irk’ or ‘incommode’ –the latter almost guaranteed to raise a laugh. What wonderful choices.

But when it comes to blogging, if you try to keep Google happy by repeating key terms from your title at least every hundred words so it is picked up more readily by search engines, those words are either not precise in each case, or you are simply repeating yourself. This is why such writing is called ‘content’ (as opposed to a piece, article or feature) because it has the consistency of a can of beans rather than the depth and flavour of a chili con carni.

What do you think – dinosaur or creative device?

Writing Your Nonfiction Book: the complete guide to becoming an author – ” ..comprehensive and constructive…there is a substantial section about improving your writing craft that could equally apply to fiction...”

And if you love stories, history and culture, this is for you: A Biography of Story, A Brief History of Humanity

You can read a review here.

13 thoughts on “Thesaurus: a species of dinosaur?”