Anu Paulose giggles with nerves, waiting to perform her story. She will explain the gist of the tale in English before telling the story in her native language – Hindi.

Like all the storytellers at this festival, Anu is a volunteer, not a professional storyteller; she is simply a local resident of the small rural town of Kaitaia, way up in the Far North of New Zealand. Although a couple of preparatory workshops a few weeks ago helped to give them confidence, most have never told stories in public before and all are a bit apprehensive.

But once Anu becomes as absorbed in her tragic tale as the audience she enchants, her demeanour changes: she feels the yearnings of Laila and Majunu – lovers whose marriage is forbidden by their parents. Though parted, the lovers remain true to each other throughout their lives, Majunu finally dying on Laila’s tomb.

It is an ancient legend originating from the deserts of Arabia (known there as Layla and Majnun), related from one generation of Bedouin to the next. In a thousand years of retelling it has inspired people of many nations and times, including Eric Clapton in his popular song ‘Layla’.

And this sharing of stories through diverse times, places and languages – each telling adding something unique – underpins the theme of YoiFest: a multi-lingual storytelling festival. 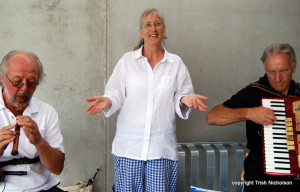 YoiFest was the brainchild of another local resident, Ineke Post, (pictured here with musicians Colin Horsfal on accordian, and Doug Bakke). When I asked Ineke what gave her the idea, she responded: “I’m Dutch!”

A member of that small nation known for its willingness to embrace the languages of surrounding cultures, Ineke grew up bi-lingual in Fresian (her mother’s native tongue) and German, and now speaks five languages. She explained: “I can speak these languages, but I think in my own. Having to translate thoughts into another language is not the same. It is not so easy to communicate what you really feel inside.”

Missing the babble of tongues she had experienced in Europe, and wanting others to enjoy stories told in the storyteller’s own language, Ineke began an eighteen-month mission to inspire others in the town with her passion. Many local people contributed to the result: YoiFest 2014, held on February 15th in Kaitaia’s civic centre, Te Ahu, where eleven storytellers from eleven cultures told stories in eleven different languages and dialects. To make it available to everyone, the day’s events were free although koha (donations) were welcomed.

Stories were heard in various corners of the complex, including under the massive pururi trees in the grounds where the audience sat comfortably on hay bales. 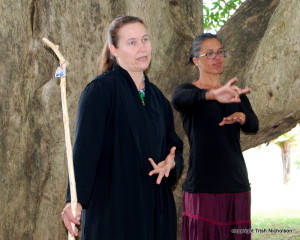 Under these trees, Sabrina Griffiths tells, in Dutch, her folktale of a lovelorn witch – Old Minneke –who entices the young sons of neighbouring farmers to her cave with promises of gold.

The importance of sight as well as sound in oral storytelling is clear as Sabrina sweeps across the ground with the witch’s visible power of seduction, or shows the anguish of parents bereft of their sons.

And, as with all the stories, someone stands near her to interpret into yet another language – New Zealand Sign Language for the deaf. 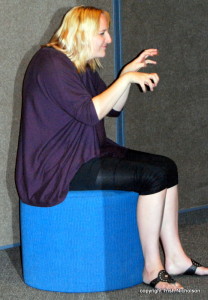 Another storyteller, Alana Best, points out that the deaf have their own cultures as well as their own sign languages, so signs are different in each country. Her tales, told with wonderfully expressive face and hands, are of two cats; one clever, the other greedy, and this time, the interpreter speaks the story for us in English.

When we applaud at the end, Alana signs to us that in her culture, because the deaf cannot hear clapping, audiences raise their hands in the air and wave their appreciation – which we do with great enthusiasm. 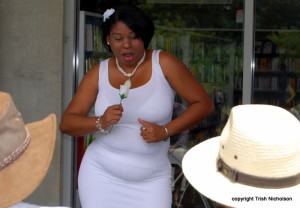 Here, Joanis Rivera gives a lively and loving description of her Cuban homeland, and in Cuban Spanish, shares poems of the revolutionary poet, Jose Marti. (José Julián Martí Peréz, born in 1853, was a national hero in Cuba and became a prominent figure in Latin American literature.  He was only 16 years of age when his first poems were published). 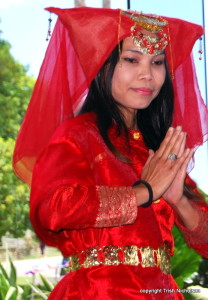 In the circular, glass-walled atrium of Te Ahu, Nina Rori adds elegant dance to the telling of a West Sumatran folk tale told in her native Bahasa Indonesian.

The story, Malin Kundang, depicts a young man who left home and made his fortune, and then denied his humble origins,  turning his back on those he had left behind: a story relevant in all times. 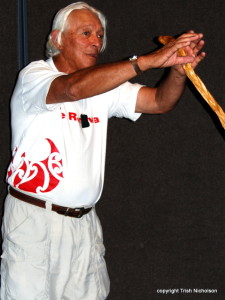 Maori make up the majority of the population in the Far North, and in a corner of the museum which displays the history of his people, Dr Bruce Gregory treats us to a story in his own tongue, Te Reo Maori. In this tale, a rangatira (local chief) goes out in search of a wife, but is diverted in his wanderings by the scent of flowers.

A story from Liaoning Province told in Mandarin by Lai Fang Smith, reveals the origins of Chinese moon cakes, which are gifted between families, friends and associates, and eaten, traditionally, at the Mid-Autumn Festival in honour of Chang E, mythical moon goddess, purveyor of immortality and harmony. 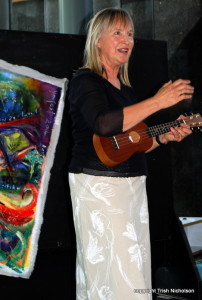 Guy de Maupassant, 19th century doyen of the short story, would have been surprised to play a role in YoiFest, in a town he’d never heard of at the other end of the planet. But his famous story, La Parure (The Necklace) was chosen by Jane Hillier for her story slot, and performed in French with a few visual aids and a tune or two.

A moral tale of the heavy price of vanity: Mathilde, a young wife and maid, whose beauty and aspirations are not matched by the income of her pen-pushing husband, ‘borrows’ a diamond necklace from her employer’s jewellery box to attend a ball.

Her plan to return the necklace in the morning is dashed when she discovers she has lost it. Mathilde and her husband sink into poverty in their attempt to replace the necklace. The tragic twist in the tale comes ten years later, but I am no spoiler: if you weren’t at YoiFest, you will have to read the story for yourself.

Perhaps, at this point, you are wondering: Why ‘yoi’? What does it mean? (In Yiddish, ‘yoi’ is an exclamation of surprised woe: quite the reverse of its use here).

Ineke wanted to emphasise the significance of language as an expression of culture. She explained that Yoi (or Yonaguni) is a language spoken, now, by only 800 people on the Ryuku Islands (between Taiwan and Japan). As an endangered language, it symbolises the importance of a ‘mother tongue’ to the sharing of indigenous stories. And both Ineke and a ‘co-conspirator’, Gill Minogue, thought it had a suitably joyful (‘yoiful’) sound to attract an audience.

But to return to the stories. Early immigrants from Croatia formed a significant part of the Far North’s population. Two of their descendants, M. Henderson and E. Matich, share the story, in English and Croatian, of a young girl’s anguish at leaving her home in Dubrovnik to sail to a new life in America. The living conditions immigrants found themselves in were often as tough as those in their home country, but Yugoslavia was in turmoil at that time.

For their safety, girls were often formally betrothed to young men who had already emigrated; men recommended by relatives who worked alongside them, but men the girls had never met until they arrived as their brides. 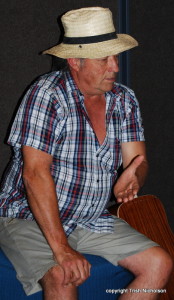 Jabu and the Lion, though a traditional Zulu tale, is told in South African English by Colin McDonald.

Once upon a time, an honest and hard-working young herd boy released a lion from a trap, on the lion’s promise that he would not eat Jabu once he was freed. Instead of going on his way, the hungry lion decided to break his promise, but before he could harm Jabu, he was tricked by the jackal and trapped once again.

Moral: broken promises come back to bite you.

During the midday break for refreshments I saw a couple whose smiles told their own story: they seemed to be experiencing a second childhood in their enjoyment of all these tales. I asked their names. “Joan and Doug Hunter,” they said.

It wasn’t until I gathered under the puriri trees for the last story of the day, that I realised Doug was one of the storytellers, spinning yarns, in English West Country dialect, of village life among the yokels. 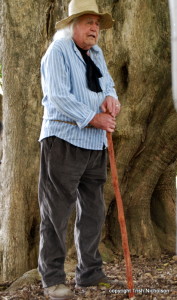 When he finished, amid much applause, someone said: “How do you manage to remember all that, Doug, it’s amazing.” With a rueful grin Doug replied: “I didn’t. I left bits out.” “Well, we wouldn’t known that. It was good anyway,” said his admirer.

He was right. That is the nature of oral stories: each telling is a unique event. In addition, each listener interprets and understands the story in his or her own way, much the same as when we read a short story or a novel.

And despite the fact that the stories we heard came from many lands and different times, they all have something in common: they help us to understand ourselves and our fellow human beings, and they exemplify ways of dealing with everything that life throws in our way.

YoiFest was an especially exciting event for me because it dramatised the universality of storytelling and the multiple roles that stories play in our lives; themes that formed the foundations of my two recent books: From Apes to Apps: How Humans Evolved as Storytellers and Why it Matters and, Inside Stories for Writers and Readers

I hope my sharing of YoiFest 2014 from this small town might inspire you to organise a similar event in your own locality.

2 thoughts on “The Languages of Storytelling – YoiFest 2014”

The following two ebooks are available free for private study. They are copyright and no text or images may be reproduced or published without the author’s written permission. To request a copy of either ebook, please use the CONTACT page on the header bar.

An illustrated ethnography of tourism and culture change on Marinduque Island in the Philippines.