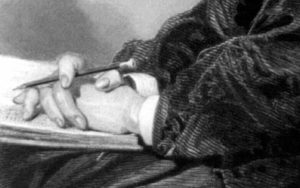 Hands that clasp, caress, entwine; gnarled as tree roots or as soft as down – how can we use them to draw characters?

Only we humans have the rotating and opposable thumb that allows us to make tools and weapons with such potential for creativity and devastation – and to hold a pen. More significantly, our hands are garrulous communicators; gestures undoubtedly played a role in the evolution of language. Try talking while sitting on your hands (appropriately, a metaphor for inaction).

They are eyes to the blind and tongues between the deaf or mute, and our hands can send unintentional messages our faces have learned to conceal – a ‘handy’ way for writers to show inner conflict or deceit, but I am jumping ahead.

Since our prehistoric ancestors stencilled their hands onto cave walls, hands have come to stand for the whole person. Once anatomically accurate drawings were made, in the fifteenth century – by Albrecht Durer and Leonardo da Vinci for example – a hand could also represented individual personality. And in 1882, a French anthropologist and police officer, Alphonse Bertillon, used detailed measurements of hands as a means of identifying criminals, later developed into fingerprinting – providing signatures for the non-literate and familiar to any modern traveller.

In art, drama, dance, music and literature, hands are a means of revealing story, expressing feelings and transmitting information. But meanings vary with time and place. It is a tradition that in ancient Rome, ‘thumbs down’ signalled death for a gladiator: in modern Greece, ‘thumbs up’ bears the same insult as ‘two fingers’. All cultures have myths and taboos of one form or another relating to hands, most commonly to do with left and right and rules for what you can or cannot do with each.

In the Philippines, a father blesses his son by touching his forehead. Christians receive benediction by the laying on of hands; Muslim’s wash their hands in symbolic cleansing of the soul before praying, and in parts of Papua New Guinea, mourners show grief at the death of a close relative (and thereby declaim their innocence in the cause of death), by cutting off the top joints of their fingers.

Hands – manus in Latin – have a firm grip on the English language, giving us ‘mandate’, ‘manoeuvre’, ‘manifest’, ‘manage’, and ‘handsome’ (originally meaning ‘dexterous’ and thus also ‘right-handed’.) Our hands are into everything: in a hand-shake, a handkerchief, or a finger of gin – and that is before we start on palmistry and telling the future. One could write several volumes about hands; someone probably has.

Shakespeare used hands to signify inner states of mind, most notably using Lady Macbeth’s ‘hand-washing’ while sleepwalking as a way to show her feelings of guilt – the ‘blood on her hands’ after Duncan’s murder – and her famous lines in Act V, Scene 1 of Macbeth: “Here’s the smell of the blood still: all the perfumes of Arabia will not sweeten this little hand.”

John Steinbeck also used hands as symbols. Lennie’s hands in Of Mice and Men are referred to as ‘paws’ because, in his impaired mental state, he could not control the instinctive violence they could inflict, yet those same hands could tenderly fondle the soft fur of a rabbit – a deceptively simple way of portraying the complexity and conflict within Lennie’s character. But Steinbeck goes further, using detailed physical descriptions of hands to sketch individual personality: George’s hands are neat and deft; Curly’s wife paints her nails with red varnish, and so on for all the main characters.

And I wonder: did the tender but work-rough hands of Oliver Mellors – Lady Chatterley’s lover – snag the fine fabrics of his upper-class paramour?

So how can we ‘get a handle’ on all of this to enrich the way our characters show themselves in our stories? I’m sure you have thought of many already, but here are a few random suggestions, some of which could have different meanings depending on story context (as with most body language).

Texture of hands may indicate states and status: coarse, smooth, lined or scaly may show age, social status, or occupation such as physical labour (and may contrast with a character’s inner desires or abilities – an interesting conflict). Skin texture may also show habitual activities such as gardening, lifestyles (by choice or coercion), and health.

Colour of hands can show ethnicity indirectly (there is no melanin in the palm of the hand). Brown spots show aging. Blueness around the nail bed in infants can signal imminent death. Sun-tanned/pale/manicured/paint-spattered hands, painted or bitten nails, all tell different stories. And hennaed, tattooed, bejewelled and scarred hands can hint at status or class in various cultures and sub-cultures.

Conditions that are reversible or progressive could be used to define changes in time or situation (and provide a potential progression or turn in the plot).

Structure (swollen joints/veins/slender or stubby fingers/missing digits) may show age, health, or foreshadow aptitudes. Hand structures may feature in a character’s self-image or past, and even identify them after death.

The surface condition of hands can signal emotional states – damp, dry, warm, cold – singly or in various combinations and situations they can show fear, excitement, detachment, calmness, openness, eagerness, and health or sickness, as well as changes in these emotions. Where hands are placed, and their posture – gripping, relaxed, flaccid, flexed, held together or apart – can characterize similar emotions and help to reveal inner states.

Hand movements can be used to demonstrate relationships – who touches whom, how, where, and how does the recipient and any observer react. Other possibilities are : open palms (invitation/innocence/acceptance); clenched hands (denial/anger/frustration/tension/withdrawal); how a character’s hands move (hidden or overt gestures) when different people are addressing them or approach them; and the use of sign-language may signal deafness, or conspiracy in silence.

The way characters move their hands can also show emotion  by wringing, clenching, rubbing of hands; waving; a whole gamut of gestures from beckoning to ‘giving the finger’; fidgeting; fumbling; twitching; chewing/sucking nails and fingers; picking at the quick of the nails; tremor (excitement/fear/or sickness – Parkinson’s disease, delirium tremens, for example), or by complete stillness.

And have you ever watched a woman gently touch a beautiful object she cannot afford to buy? It is a specific kind of hand movement – a caress without possession, or hope.

Sudden change in habitual movement or immobility of the hands can be particularly potent in showing a character’s reactions. I knew when my mother was especially excited about something because she would shake her hands while telling me about it. An aunt was a worrier: she constantly scraped the sides of her thumb nails with her finger nails – the tips of her thumbs were permanently red and swollen.

Hand movements can show skill, too: the discerning shopper squeezing fruit; the seamstress assessing fabric between finger and thumb, and the disarming laxity with which a virtuoso cellist appears to hold the frog of her bow.

Another possibility is demonstrating inner conflict, confusion or deceit. Some have already been mentioned, but if you wanted to emphasize it, you could do so through dissonance between what the hands are indicating and what the eyes, face and/or dialogue say, or your character might cross her fingers behind her back when she lies.

Hands can also portray settings and environment as well as character’s response to them without having to describe everything.

For example, the effects on exposed hands of hot or cold climates or working conditions; exploratory feeling with the hands may signal blindness, but also ambient darkness. Different cultural methods of greeting with the hands can depict period and place with hand kissing, handshaking, ‘high-five’, backslapping, or palms pressed together as in Thailand (the height of the hands indicates relative status of the one being greeted).

And we all know what a fuss can be created about small hands.

Now you can watch everyone’s hands and what they do with them.

[An edited version of a section in the book, Inside Stories for Writers and Readers – not currently available.]

Trish Nicholson is the author of A Biography of Story, A Brief History of Humanity, an entertaining cultural history of the power of stories in the comedy and tragedy of human affairs – from our foraging ancestors to the digital age – seen through the eyes of storytellers around the world. You can read more about the book HERE