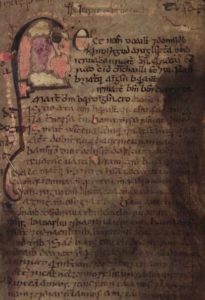 In what some see as our post-truth world, the word ‘myth’ has become entangled with ‘fake news’ and ‘alternative fact’ as a term of disparagement. A dangerous misunderstanding of myth.

I think of traditional mythologies as ancient messaging systems for cultural transmission via oral storytelling; like other forms of fiction, they can impart deep human, even cosmic, truths. Myths are often metaphorical in a similar way to ritual masks: though appearing to hide something metaphors reveal meaning in new and more vivid ways.

Constructed from human experience, myths emerge from history and similarly share the mutability over time of human understanding and language. Nonetheless, their message has a penetratingly powerful influence on the human psyche and may endure for millennia. This is why myths can be effective propaganda. The Book of Conquests (Lebor Gabáila Érenn) was ‘stitched together’ from remnants of ancient Irish stories by eleventh-century monks, their purpose, to create an’origin narrative’ that would incorporate pagan gods and Irish heroes into a Christian pedigree as descendants of Noah.

Irish mythology has enthralled generations of story-lovers while historians assumed they were mere fermentations of Irish blarney with no more substance than the head on a pint of Guinness. Myths are not reliable history. Fact-checking is irrelevant. But is it?

What if the message did embody important facts unrecognised by later generations?

New archaeological methods recently proved just such a fact in at least one ancient Irish myth.

Despite its ideological framing, The Book of Conquests remains the most comprehensive compendium of traditional Irish mythology, and among its myriad stories are those of successive waves of conquests from across the Irish Sea, each new group bringing significant aspects of Irish culture. First came the Partholóns, who invented ale and cooking, enduring many battles with the local Fomorii. Eventually, the Partholóns all died from plague, all except Fintan, who changed into a salmon and other animal forms to survive until Saint Patrick’s time to tell the tale of subsequent invasions.

The idea that a series of inward migrations took place over thousands of years in Ireland is generally supported by historians. But in The Book of Conquests, the Partholóns are followed by the Nemeds, Scythians who arrive in a single boat, the only vessel to survive a fleet that had originated from the shores of the Caspian Sea. A tale too tall?

“in an exciting new development at the end of 2015, Irish scientists sequenced the genomes of a Neolithic woman (3343-3020 BC) from a tomb in Ballynahatty, near Belfast, that revealed her origins from the Near East, and sequencing the genomes of three Early Bronze Age men (2026-1534 BC) buried on Rathlin (a tiny island off the northernmost tip of Ireland) showed a genetic heritage from the Russian Steppes – a wide swath of grasslands to the north and east of the Caspian Sea.” * [A Biography of Story, A Brief History of Humanity p.109]

A significant fact of tribal origin appears to have survived thousands of years in the re-telling. Norse mythologies, too, speak of surprising origins, of Odin’s odyssey to Scandinavia from ‘Turkland’, also adjoining the Caspian. A journey which followed the  river Volga northward to the Baltic Sea; the same route taken in reverse by Viking traders centuries later.

Perhaps we should look more closely before dismissing traditional myths as … mere myths.

* Lara M. Cassidy et al. ‘Neolithic and Bronze Age migration to Ireland and establishment of the insular Atlantic genome’, in the Proceedings of the National Academy of Sciences, Published online 28 December 2015; doi:10.1073/pnas.1518445113.

Dr Trish Nicholson, a social anthropologist, is the author of A Biography of Story, A Brief History of Humanity. You can read about this new cultural history of storytelling and view the Introduction and List of Contents here.