Fleas, Bedbugs and Other Travelling Companions

When one of my ‘passionate travellers’, the great essayist and philosopher, Michel de Montaigne, toured Italy in 1580, he found Florence inhospitable: “I was forced to sleep at night on the dining room table, putting mattresses and sheets on it; not having found here any comfortable lodging to rent, for this city is not a good one for strangers.” In particular, he was trying to “escape the bedbugs, with which the beds are most thickly infested.”

The companionship of vermin was an early global phenomenon for travellers, though not always mentioned in their journals because fleas, for example, were as ubiquitous in their own countries as abroad. People lived more closely with domesticated animals, cattle and horses often sheltered within the family home (today’s dog and cat lovers will appreciate the problem). And bathing was not a regular occurrence for most people, especially in cold climates.

“We were eaten alive by fleas” is a common refrain in Isabella Bird’s letters to her sister, Hennie, while Isabella travelled the length of Japan from Tokyo to Hokkaido, staying in primitive yadoya (rural guest houses, often dwelling, stable and barn combined). Isabella arrived well equipped for her journey – she had brought from England in her trunk a copious supply of note paper, carbolic soap, common morphine-based medicines, and her wellington boots – but Thomas Keating’s insect powder was not yet available in 1878. 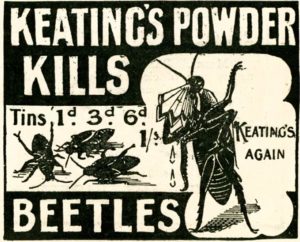 By the time Mildred Cable was crossing the Gobi Desert in a mule cart on her Christian mission in 1923, Keating’s slogan, “Keatings Kills!” had already become famous; their powder having proved its value to soldiers crammed into the trenches during World War I. As Mildred stayed at ‘inns’ whose only facilities were a bare sleeping shelf beside a smouldering fire of foul horse dung, in a hovel shared by others with their mules and camels, she always packed a large box of Keatings Powder among the gospels and Christian tracts that made up most of her baggage.

Keatings Powder was still available twenty years ago. I was glad of it while trekking with hairy yaks in Bhutan. But threats of the itch and those nasty little red bumps can bring out the worst in people. I had only one small sachet of the powder and confess that, as my fellow travellers squirmed and scratched around the camp fire, I did not admit to it.

Incidentally, Keatings, an innovative company, was recently awarded a contract by the European Space Agency to make parts for its new satellites – presumably the company can ensure that no bugs get into the system.

Lice compete with fleas as irritating attention seekers and may well have a longer pedigree. Preserved in the dry desert conditions of Negev, in southern Israel, researchers found hair, complete with head lice, on an 11,000-year-old skull. Fine-toothed lice-combs have been found in Egyptian tombs from 5,000 years ago, but both head and body lice have been around for at least 5 million years. And they were (and still are) a great leveller: even Queen Cleopatra suffered from head lice, but her nit-combs were, of course, superior artefacts – probably carved from ivory and inlaid with gold.

Head lice lay their eggs and feed only on our scalps, but body lice can creep around in our clothing seeking a better spot for ‘dinner’, as the seventeenth-century haiku poet, Matsuo Bashō, discovered when unpacking after a six-month contemplative hike across his native Japan. Settling back into his house, having lightened both mind and body with his travels, Bashō expressed in haiku that same feeling of a journey’s lingering presence which most seasoned travellers have experienced (sometimes literally as well as metaphorically).

“Shed of everything else,

I still have some lice

I picked up on the road –

Crawling on my summer robes.”

[The Narrow Road to the Deep North and Other Travel Sketches, Matsuo Bashō]

Combing through the hair on a ‘search and kill’ mission is still the best remedy for lice; fleas are more elusive on account of their athleticism. In either case, having caught them, methods of killing allow for individual preferences. In the year 922 CE, ibn Fadlān, Muslim scholar and emissary of the Abbasid Caliph, made his historic journey from Baghdad to the Volga River in central Russia – where he met and was the first to chronicle the Rūs, the Viking traders – and among his attendants were some mercenaries, Turkic-speaking Muslim converts who had served in the Caliph’s army. From ibn Fadlān’s travel journal we learn that one of them, a member of the fearsome Bāshghird tribe, “ate his own fleas”. 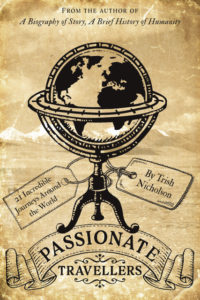 You can enjoy more fascinating true tales of travellers in the past, share their journeys step by step, and discover what passion drove them to risk their lives in, Passionate Travellers: Around the World on 21 Incredible Journeys in History. Released 28 April, order from your favourite bookshop, or from the Book Depository with free postage here.

Also available as an eBook from your favourite digital supplier.

Read why I wrote Passionate Travellers and find out who they are here: