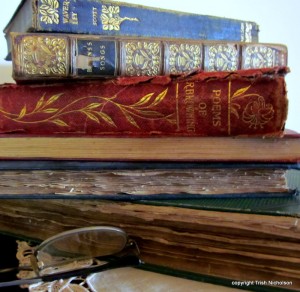 It was a rare treat to rootle around a good second-hand book shop last week and I came away with armfuls of treasure – and in dire need of more shelf-space.

One gem was H. E. Bates’, The Modern Short Story from 1809 to 1953, a fascinating ramble from Gogol to Lawrence, via Poe, Maupassant, Chekhov (Bates uses ‘Tchehov’), Tolstoy and a dozen others. Recognising that story’s history goes back a few thousand years, Bates justifies his starting date for the short story as the point at which it became a deliberately constructed art form, and the most difficult and exacting form of prose, but he has trouble settling on a definition.

To pragmatist H. G. Wells, the short story was defined as a half-hour read. For Poe, the meaning of every word – explicit or implied – must focus entirely on a pre-determined outcome. Fans of Chekhov will not be surprised by his opinion that stories should have no beginning or end – but I don’t think that means the first and last sentences are not critical; it is more to do with where, in the arc of the story, you begin, and letting readers tweak their imaginations.

Bates finds no definition entirely satisfactory because one of the strengths of the short story is its boundless flexibility, but he gives some delightful descriptions:

‘To see a writer building up his tale, piece by piece, as one builds up a toy tower of match-sticks, and to feel that he knows instinctively and consciously which match-stick must be last and exactly when the tower will bear no more, is an experience which can become, also, a general critical test of form.’

But what interested me most were his comments on the relationship between the short story and film:

‘Mr. A. E. Coppard has long cherished the theory that short story and film are expressions of the same art, the art of telling a story by a series of subtly implied gestures, swift shots, moments of suggestion, an art in which elaboration and above all explanation are superfluous and tedious.’

‘Indeed the two arts have not only accelerated together but have, consciously or not, taught each other much. The scrap of dirty paper blown by wind along the empty morning street, a girl sewing, on a railway station, the tear in her lover’s jacket and he hiding it by holding up a suitcase, a mother staring dumbly at her returned gangster son – these tiny moments, seen as it were telescopically, brightly focused, unelaborated and unexplained, stamp swiftly on the mind the impressions of desolation, embarrassed love, or maternal despair. Each moment implies something it does not state; each sends out a swift brief signal on a certain emotional wave-length, relying on the attuned mental apparatus of the audience to pick it up.’

Writing the first edition of The Modern Short Story.., at the beginning of the Second World War, Bates noted that more, and better, short stories were being written in England and America than ever before; he was optimistic that the post-war period would provide a fruitful environment, as it had after the First World War: ‘if no other good comes out of wars, stories will.’

In looking for development in the arts, Bates emphasises the importance of context, of prevailing social and cultural conditions; given the extent and rapidity of change in the last twenty years, or even the last five, it provides significant insights into where the short story might be heading today:

‘A particular artistic form does not flourish in a particular age because of a happy accident, but because certain cultural, inventive, revolutionary, or popular forces combine to stimulate its growth: so that finally, perhaps, it becomes the most necessary and natural expression of the age.’

By the time Bates wrote a ‘Retrospect’ to his second edition (in 1971), the post-war resurgence of the short story he had hoped for had not happened. But he could not have foreseen the electronic revolution that has impacted both film and short fiction, in many ways bringing them closer together: the ubiquity of U-Tube, the emergence of e-zines, use of transmedia in storytelling, ease of publishing short stories as e-books, the huge popularity of flash fiction, and all the other ‘fast word’ outlets. Nor the perpetually-in-a hurry audience that is, perhaps, increasingly attuned to picking up the ‘brief signal on a certain emotional wave-length’.

Is the short story about to become the ‘most necessary and natural expression of the age’?

Trish Nicholson is the author of A Biography of Story, A Brief History of Humanity, an entertaining cultural history of the power of stories in the comedy and tragedy of human affairs from prehistory to the present, seen through the eyes of storytellers from every corner of the world. Trish has a PhD in social anthropology and is the author of a range of narrative non-fiction works and has written some award-winning short stories.

4 thoughts on “What is the future of the short story?”