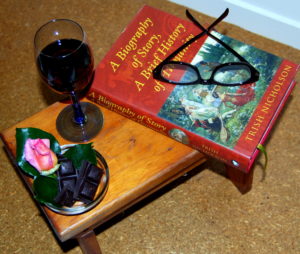 Now that A Biography of Story, A Brief History of Humanity is released, I want to show you why I wrote this non-fiction book and broke three ‘golden rules’ of publishing.

One of my editors described the book as ‘a love letter to Story’. He was right in a way. The energy for years of researching, sifting and writing was generated from a love of stories, but the drive to produce this particular book came from somewhere deeper.

While we celebrate those we love, at the same time we worry about their welfare, their vulnerability and their future. And so it was for me with Story.

Stories are so fundamental a part of all of us that they define our humanity. Our brains seem to have evolved to function in narrative, bestowing on our ancestors the story-power to pass on knowledge and values essential for our survival.

Some of the stories we share are extremely ancient. Tales of floods, for example, which likely arose from catastrophic environmental events thousands of years ago – even from rising sea levels at the end of the last Ice Age – still bear survival value.

Do you remember the devastating tsunami on December 25th 2004, which killed an estimated quarter of a million people in South East Asia? The Moken, a coastal dwelling indigenous people, all survived, and their menfolk already at sea rescued many from drowning. They had recognised in time the warning signs of a tsunami from their traditional tale of the seventh wave.

But stories are equally vital for our understanding of more complex concerns such as relationships, identity, and managing the unknown and unknowable. It is this, together with stories’ extraordinary emotional reach that makes us so vulnerable to their manipulation; to fake history, ‘alternative’ facts, and data gathered from our social media accounts and used in propaganda to influence our inner stories.

The final chapter of Story approaches these issues:

“Newly heard storytellers from many nations tell their tales of struggles endured, of independence gained and of new challenges to overcome. And Story adapts to a digital world which promises greater freedom and threatens new forms of oppression. Amidst the clamour of global voices Story stands at this fork in the path, waiting for us to choose.”

So the first ‘golden rule’ that I broke was to be inspired by my love of Story and anxiety for her freedom rather than what was ‘hot’ in the marketplace.

The second breakage was unavoidable: Story commits the sin of crossing several genres. Thinking through stories from prehistory to the digital age created an interlacing of literature and history with inevitable strands of economics and politics that adhere to them.

Ivan Krylov turned to writing fables in Tsarist Russia because he could slide them past the censors who had no understanding of allegory. And the incentive for Harriet Beecher Stowe’s publication of Uncle Tom’s Cabin was “the Fugitive Slave Act of 1850, which made it a crime to assist a runaway slave anywhere in the United States; an act that potentially made every American citizen an accomplice to slavery’s inhumanity.”

History does not repeat itself – time changes contexts and consequences – but it is not left behind either; it walks in our present and influences our future. I wanted to reconnect with the threads of history that brought us and our stories to where we are now.

In particular, I was fascinated by the longevity of specific stories – scholars have traced early versions of Jack and the Beanstalk to at least 3000 BC – and how oral tales travelled across the world to be adapted in different societies, whether by peaceful cultural influence or by conquest and force.

What remains of ancient Celtic myths was compiled by multiple Christian monks from scraps of manuscripts and oral accounts; revisions and rewrites turned the old pagan gods into mortals, and traditional heroes and heroines into Christian saints in missionaries’ efforts to convert the Irish. A similar process tweaked Persian fables into Buddhist tales and created Muslim legends from pre-Islamic Bedouin love stories.

Breaking the third ‘golden rule’ was an act of wanton stubbornness (well, I am a Scorpio).

Received wisdom is clear: identify your specific reader category and target that market. Publishers ask for this information in their submission guidelines, many even state: ‘Do not say that your book is for the ‘general reader’.

I plead guilty. Dear General Reader, I wrote Story for you.

A line from an old morality play – “Everyman, I will go with thee and be thy guide, in thy most need to go by thy side.” – inspired the title ‘Everyman’s Library’ for a new series of cheap reprints of the classics launched in 1906 by J. M. Dent publisher aimed at the ‘general reader’. Mass education was producing keen new readers; Carnegie’s first free library had opened in Dunfermline, in Scotland, in 1880 and public libraries and reading clubs were spreading in Britain and the USA.

Although a huge amount of research went into Story and copious endnotes cite sources, I wrote the book to be inclusive, to be accessible to Everyman. Pre- readers included historians, homemakers, teachers, writers, a truck driver and a lawyer, and my favourite comment was: “I left school at 15 but I’m enjoying this, it’s so easy to read.”

After breaking all the rules, Story now has to make her own way in the world. It remains to be seen whether I can let Everyman, and Everywoman, know about her, but we dressed her in style – a well designed book is an object of lasting beauty.

And with a bit of luck, I won’t share Voltaire’s experience: ‘If you publish a book, a parish curate accuses you of heresy, a college sophomore denounces you, an illiterate condemns you, the public derides you, your publisher denounces you, and your wine dealer cuts off your credit. I always add to my prayers, “Deliver me, O Lord, from the itch of bookmaking.”’

If you would like to know more about Story, there is information with links to List of Contents and Introduction here.

A Biography of Story, A Brief History of Humanity is published by Troubador Publishing in Paperback: ISBN 9781785899492 and as a special collectible Hardback edition: ISBN 9781785899508. Available from UK bookshops and worldwide (freight free) from The Book Depository.

A Love Letter to Story?
Tagged on: 'golden rules' of publishing    A Biography of Story A Brief History of Humanity    publishing    story

2 thoughts on “A Love Letter to Story?”