Only the author conjures those words into their magical sequence, but a book’s success depends on cooperation not isolation.

Most authors realise the value of editors, proofreaders, alpha and beta readers and a range of technical or professional experts available at various stages of a book’s production however it is published. But team work can achieve more than that.

Inspiration for this post came from a long-time Twitter friend who thought (understandably but incorrectly) that a series of promotional images was ‘a paid ad campaign’.

The photographs were of many different people in a range of occupations reading my latest release: A Biography of Story, A Brief History of Humanity.

I hit upon this idea because, although this non-fiction book about stories is full of historical and literary facts, it was written to be entertaining and accessible –  in a storytelling style – so I wanted to show it in the hands of a wide spectrum of readers. 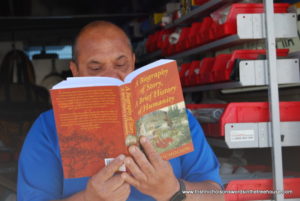 In truth, the exercise could not be further from ‘a paid ad campaign’.

I was the photographer and they were real tradespeople, professionals, voluntary workers and customers in my local community. They were persuaded to participate only with a smile and by their own kind good humour.

Even Teddy, the wee terrier, was happy to oblige.

Many writers, from Ernest Hemingway to J. K. Rowling, became well known to staff in cafes or pubs where they wrote their first drafts. But an author’s local community can be a rich source of support and ideas for book marketing as well. 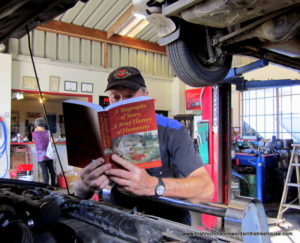 We made sure to mask the identity of those who didn’t want their bosses or customers to think they were shirking, and they each approved their picture.

But when I asked the barista, her boss was present and thought it a great promotional idea; he even refused my offer to pay for the spilled coffee.

And then an out-of-town customer, a burly surfer, was so intrigued by our shenanigans that he wanted to join the fun as well. 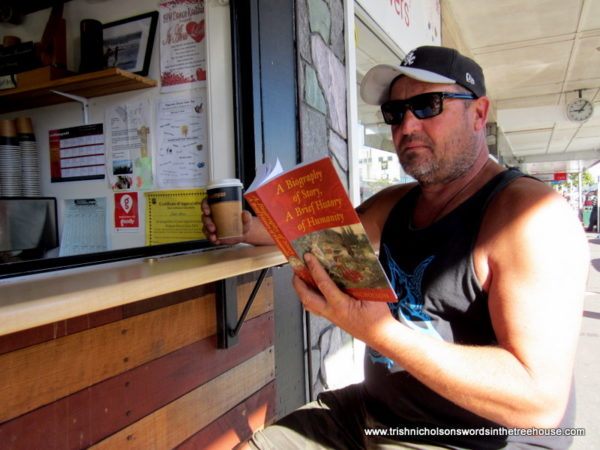 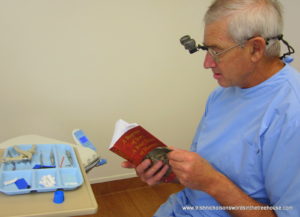 More often, the willingness to help stems from existing relationships. I have known most of these people for a long time: the mechanic still nurtures my old banger after sixteen years; the dentist has filled a third of my teeth; the plumber installed the original pipe work when my house was built; and the print shop printed all my first drafts.

Relationships and reciprocity are equally important in social media. The success of my ‘everybody’s reading it’ campaign depends on twitter followers whose friendship has developed through regular online interactions.

But important though it is for us, as authors, to maintain an effective cyber presence, competing in this increasingly celebrity-driven and cut-throat market can detach us from our local communities. 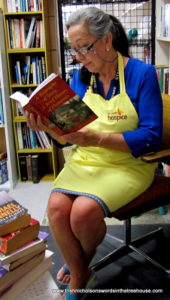 Our work is sold in virtual bookshops arranged by algorithms. But our readers are real people found in the streets, villages, neighbourhoods, towns and cities in which we live or work. If we want them to pay attention to what we write, we should pay them attention, too.

For example, you could give a copy of your book to your local library, and donate copies to local charities for fund raisers and raffles.

So there it is: like so many corny old saws, ‘do as you would be done by’ imparts wisdom as vital to authors as to everyone else.

If you would like to know more about A Biography of Story, background information is here, and a launch post here.

If you are interested in book promotion you might like two recent posts, Anatomy of a Book Cover, and How to Write a Book Blurb, and more tips on publishing and marketing can be found in Writing Your Nonfiction Book: the Complete Guide to Becoming an Author.

Available in the UK from bookshops and worldwide (freight free) from The Book Depository.

And if you’re still here, this is my favourite picture of the whole set: