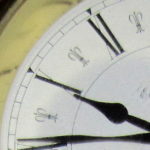 “Durn near the best prawns and chilli sauce I ever had, Vince.”

It was too, with all the right fixin’s an all. Plenty green ginger and not so much chilli that you couldn’t taste nuthin’ else – just like Ma made. She learned me to cook. All the years workin’ in restaurants prawns was my specialty; never did tell the boss I dumped his recipes and used my Ma’s. Rest her soul.

I nod at Vince and he ducks out and lobs me a nice cool can. He can be a bit crusty, Vince, but a sound guy. I’ve known him for … well, it’s gettin’ on for 12 years now. You can depend on him. As we say here in Texas, he’ll do to run the river with. If you’ve got a tough assignment, he’s the guy to have along. And right now I’m feelin’ about as jittery as a long-tailed cat in a room full o’rocking chairs.

How’s the time? No sweat yet … June 10th, now there’s a happenstance; big brother Jake’s birthday. Bastard. I guess neither one of us got what you might call a real good start – our Pa lit out before we hardly set eyes on him; Ma all wore out working day and night just to keep the shack around us. I don’t blame her for the sorry guys she brought home, she was an easy mark, but they sure had a bad influence.

God knows I ain’t no angel. I’ve done dope and a good bit of thieving in my time. Got put in the slammer for it too – twice.  But Jake. He was a whole nuther thing. Some guys runnin’ dope are as dumb as a box o’rocks. Not Jake the Snake. He was smart and thought he was ridin’ high; done it by pushin’ high school kids. Kids. Youngsters with no better start than we had. And he pimped the girls he got hooked. He was makin’ it all ways. But he took risks when he started jerkin’ the suppliers around.

I was goin’ straight then. Chef: finger-lickin’ good prawns. With Angie, my steady girl – a real foxy lady, but sweet with it. That was too much for big brother. He put the moves on her, used her, would have trashed her like every woman he come in contact with, but my beautiful Angie topped herself. That really choked me up. The bastard deserved everything he got.

“Sure thing, Vince. Equipment all checked?”

There’ll be no screw-ups – these guys get plenty of practice. So here I am. Restraints in place, ready to run this river alone. We can’t all live honest, that’s a fact. But a man should die honest.  No judge nor jury ever believed it, but it weren’t me as killed my arse-hole of a brother. Wished I had. Whoever did – live long and sweet, buster.

Lord ha’mercy on my soul.

The storyline of Runnin’ the River is formed around a single scene – eating a meal – during which a narrator thinks about his life, with brief dialogue at the beginning and end: a structure I hoped would be invisible, to emphasise the theme of an unjust execution. To increase that impact, I used a ‘first person’ point of view in the present tense, and took the risk of writing in dialect to make the prisoner’s ‘voice’ more vivid; using Texan idiom because that state is especially active in carrying out the death penalty.

Media discussion of a current execution in the USA provided the inspiration, and the fact that I had been to Texas, and also worked for several years with a Texan colleague, enabled me to ‘hear’ the protagonist’s speech. I did, though, access an internet site for Texan dialect to check what I was using and find suitable idiomatic phrases.

The story won the Flash500 competition in the first quarter of 2011. I quote the judge’s comments in full:

“I was immediately drawn to Runnin’ The River because of the uniqueness of the voice and the simplicity of the writing. Here is a man enjoying a meal in a restaurant where he’s obviously a well known regular and musing over his life’s choices, good and bad. Halfway through we realize he has an appointment to keep, but there’s no hurry. The atmosphere is relaxed, even though he admits he’s a little nervous. Three short lines of dialogue later the reality dawns like a kick in the stomach. Brilliantly executed, if you’ll pardon the pun.”

The title is a quote from the text with an appropriate meaning, and although non-Texan readers might not know what it meant, I hoped it was unusual enough to act as a hook.

As a flash story, I had to work at it over and over again to stay within the word count. Clues to the dénouement had to be visible but ambiguous: the featured meal – his ‘last meal’– is alongside his back-story as a restaurant chef (the first time I’ve used food in a story and I had to look up recipes); mention of being in the “slammer – twice” was a double bluff I feared might reveal too much. Other small clues: Vince “ducks out” (indicating a small space – the cell), and he calls the protagonist “buddy” while Vince is addressed by name (suggesting something about their relative status).

Once the basic story was in place, the editing and tweaking – in slots of 5-10 minutes at irregular intervals of days or weeks – continued for several months. The shorter the flash, the longer it seems to take to get it finally right.

[Runnin’ The River was first published on the Flash500 website, and in the first print edition of Words with JAM in June/July 2011]

Dr Trish Nicholson is the author of A Biography of Story, a Brief History of Humanity the first global social history of storytelling. “The power of stories in the comedy and tragedy of human affairs.”